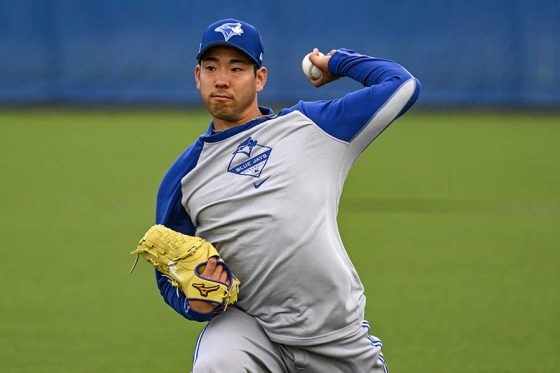 Yusei Kikuchi, who transferred to the Blue Jays under a three-year contract of $ 36 million (about 4.2 billion yen). He has joined the gorgeous pitchers and many expect him to be the 5th starting pitcher. Can the left arm with 15 wins and 24 losses and an ERA of 4.97 shine in the new world in three years in major leagues? The US data site “FanGraphs” analyzes Kikuchi by making full use of various data. While evaluating the high potential, we highlighted the “issues” that need improvement.

In an article entitled “The Blue Jays added potential behind Rote with the Yusei Kikuchi acquisition,” the site focused on last season’s “variation in release points.” While pointing out that the dynamic form makes it difficult to maintain reproducibility, the release points for each ball type are shown. It was clarified that the release points are different between the fastball system (four seams, cutters) and the changing ball system (change-ups, sliders).

The variation in form seems to have increased from the middle of the season, and it is said that the release point of the fastball system dropped by 0.5 inches (about 1.3 cm) during the second half of the season. Not only is it easier for the batter to distinguish the type of pitch, but it also seems to have had the adverse effect of lowering the number of revolutions. It seems to be one of the causes of the stall from the first half of the game, which was also selected as an all-star.

Of the four main types of Kikuchi’s fastballs, the three types of four seams, sliders, and change-ups, excluding the cutter, are highly evaluated for their potential, saying that they “have a great swing rate.” However, at the same time, it is said that the rate of “hit and hit” is also high. He pointed out that the cause is also “variation in form” and the accompanying “small disturbance of ball control”. “If you don’t do something about the form first, every adjustment won’t make much sense,” he asserted.

The point that seems to be harsh is the flip side of expectations for potential. “Even if he struggles in a volatile season this year, his qualities could make a solid contribution or more as a pitcher to be behind Rote for the next three years. It will be, “sees the site. Attention will be focused on whether we can overcome the challenges and play an active role throughout the season in the new world.

Barcelona are unbeaten in 11 matches in a row – 8 wins and 3 draws. Next game against Real Madrid – Football