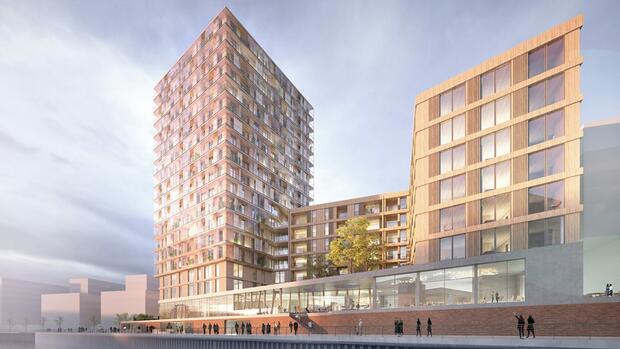 Düsseldorf A good week ago, the foundation stone was again celebrated in Hamburg’s Hafencity. This time in the Elbbrücken quarter on the east side of the gigantic 157 hectare urban development project on the Elbe. For Hamburg’s First Mayor Peter Tschentscher it was certainly not the first and probably not the last appointment of this kind – and yet a premiere: He laid the foundation stone for Germany’s tallest wooden house.

The tower, whose facade, ceilings and room walls are made entirely of wood, measures 65 meters. A total of 181 apartments will be built, of which 128 are condominiums and 53 publicly funded rental apartments. The four lower floors of the “Roots” will be acquired by the German Wildlife Foundation, where they will move into offices and open an exhibition on the subject of nature and species protection.

For project developer Garbe, the project is an example of “how we can plan buildings more resiliently and build more resource-efficient”, said managing director Fabian von Köppen on the occasion of the laying of the foundation stone. Above all, however, the timber construction, in which concrete is only used for the foundation and the central staircase, is “an important milestone on the way to a climate-neutral densification of our cities”.

Christoph Blepp, co-founder and managing partner of the consulting firm S&B Strategy, which specializes in companies from the construction industry, also sees timber construction as one of the most important drivers in the race against climate change. “The use of wood and wood-based materials can significantly improve the climate footprint of buildings,” he says. The potential to save climate-damaging emissions through the use of the renewable raw material is enormous.

“The annual CO2 emissions from the production of ready-mixed concrete in the construction sector in Germany are around 24.5 million tons. The carbon footprint of MDF and chipboard, on the other hand, is negative. “

Projects like “Roots” are therefore urgently needed if Germany is to become climate neutral by 2045. This is what it says in the tightened climate protection law, which the Bundestag passed as one of the last laws in the current legislative period in the summer. Climate-neutral means: Agriculture, industry, the transport sector, the service sector and, ultimately, private households are only allowed to emit as much climate-damaging greenhouse gas as can be absorbed by nature.

The first milestone is due in 2030: by then, greenhouse gas emissions are to fall by 65 percent compared to 1990, followed by further reduction steps at five-year intervals. After all: by 2020 Germany had achieved a 40 percent reduction in emissions – the reduced production and traffic volume due to the corona crisis helped.

In the construction and building sectors, however, lockdown and home office had exactly the opposite effect – the area is still lagging behind the savings targets. Fatal, because without a significant reduction in climate-damaging emissions during construction and, above all, the use of buildings – a total of 38 percent of annual emissions – the federal government’s climate target cannot be achieved, says Blepp.

But how can the CO2 footprint of buildings be specifically improved? What should buyers of new buildings value, and what about the renovation opportunities for older houses?

The good news: Buyers of new buildings can already significantly optimize the CO2 footprint of their building, according to a study by S&B Strategy, which the Handelsblatt has received in advance. And that applies to both the so-called process emissions – i.e. everything that occurs during the production of building materials and the construction process itself – as well as the subsequent emissions from use.

The Munich experts compared a building with a classic design with one with a climate-efficient design. Result: The climate-damaging process emissions of a 150 square meter residential building with a basement with a basement made of sand-lime brick, rock wool insulation, a flat roof with PVC sheeting and windows and doors made of PVC add up to 77,500 kilograms. It is almost 60,000 kilograms or a good 75 percent less for a house without a basement made of wood, insulation made of wood, a pitched roof made of wood and clay tiles, wooden windows and doors and a photovoltaic system for generating electricity.

When using it, emissions can be improved immensely: in particular by using a heat pump instead of gas heating and by purchasing a photovoltaic system that covers a significant proportion of your own electricity consumption. “Our example calculation shows that a building equipped in this way can even have a clearly positive CO2 balance over a 25-year period,” says Blepp. The climate-damaging emissions of the conventionally heated example building, which also dispenses with solar cells, add up to more than 260,000 kilograms in the same period.

It depends on the renovation

This shows that the lion’s share of the savings potential can be attributed to the many years in which a building is inhabited, heated and lit. “About three quarters of the annual building emissions come from the years of use,” is the rule of thumb, says Blepp. Two things follow from this: First, the upcoming gradual introduction of the CO2 price will once again drastically change the cost-benefit calculation in favor of efficient construction. According to calculations by S&B, up to 26,000 euros in additional costs will be incurred within 25 years with classic construction. On the other hand, efficient buildings that rely on photovoltaics to generate electricity and use smart home technology to control would even benefit: Even with a conservative estimate of the CO2 price, costs could fall by a good 11,000 euros in the same period.

A difficult and, above all, costly task, as evidenced by an opinion published by the Federation of German Consumer Organizations (VZBV) this Wednesday. On the basis of complex calculations, the economic viability of energetic modernization of one and two-family houses in Germany was examined.

Background: A large part of the around 16 million buildings will have to be retrofitted by 2045, otherwise the climate neutrality will not work. But that not only costs a lot of money, the investments in better insulation, energy-efficient windows, environmentally friendly heating systems and the use of renewable energy sources would not even come close to paying off for any owner of an older home if the federal government had not topped up the various state subsidy programs recently.

The VZBV soberly notes in its report: “Without state funding, none of the energy-related modernizations examined is economical.” With funding, this is at least the case in two thirds of the building types. The VZBV demands that the last third of the buildings examined, for which the funding is not yet sufficient, must be improved.

After all: on Wednesday the Bundestag decided to provide a further 5.7 billion euros this year for the promotion of energy-efficient building renovation. This now adds up to the funding amount to 11.5 billion euros. The funds are expressly intended to help close the 2020 CO2 savings gap in the building sector. At the beginning of 2020, the federal government increased the KfW funding rates for “energy-efficient building and renovation”. For example, it promotes the replacement of old oil heating systems and the installation of energy-efficient heating systems. In 2020, almost twice as many applications were submitted and around five times more funding was approved than a year earlier.

But money alone will not solve the problem, fears adviser Blepp. “House owners already have the problem that they can hardly find any craftsmen, especially not quickly.”

After all, the construction industry has recognized the challenges posed by climate change. “Three quarters of the companies in the industry we surveyed stated that the topic is changing the demands on their products and services,” says Blepp. This applies in particular to cement manufacturers: “This branch, which is very fragmented in Germany, will come under enormous pressure in the coming decade due to climate protection regulations and, in particular, the price of CO2,” he is convinced. But other building material manufacturers will also have to adapt: ​​”The CO2 price will force change in the construction industry.”

He can already be followed live on the “Roots” construction site in Hamburg’s Elbbrücken district.