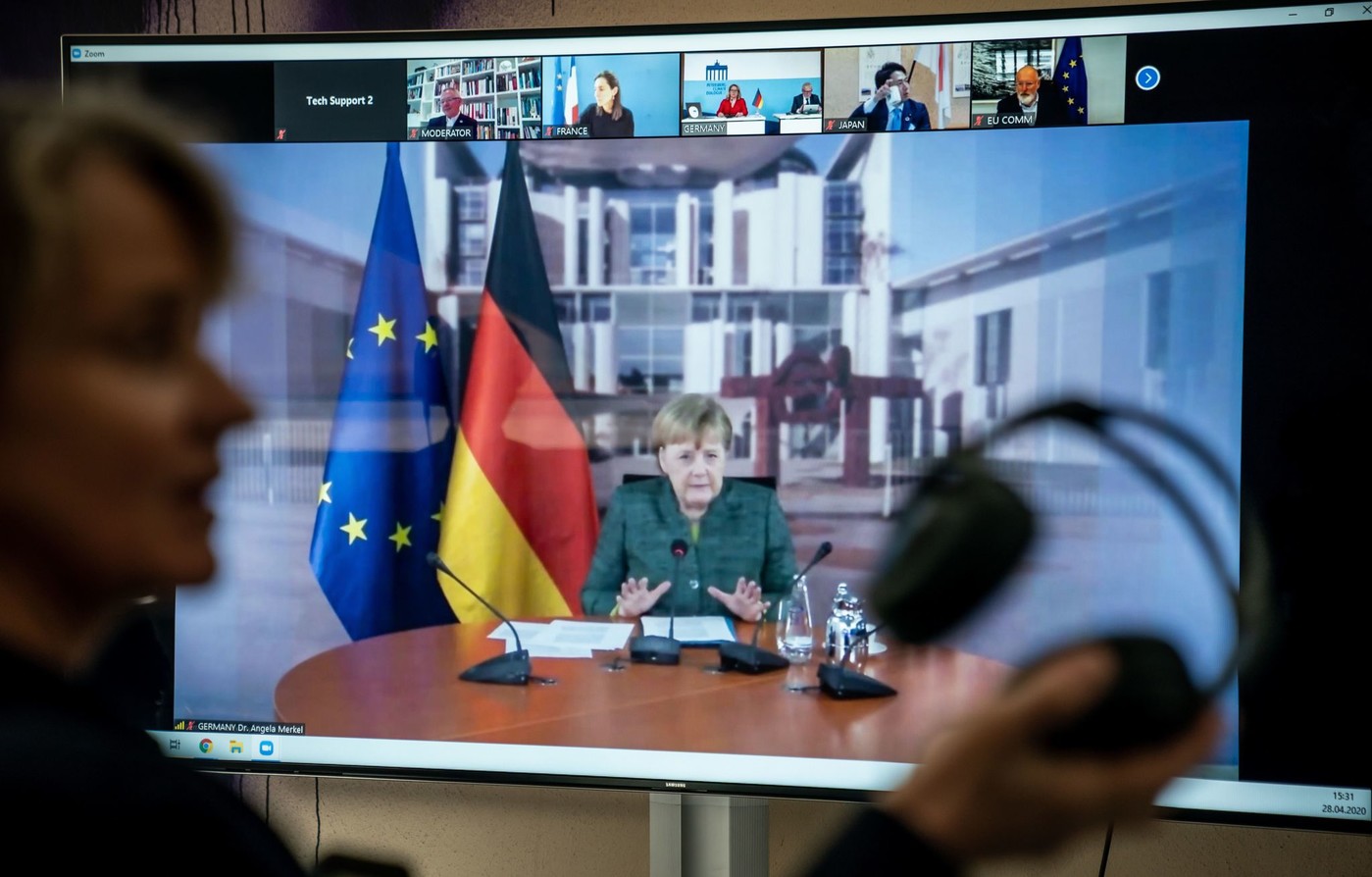 A clear signal was expected. And it was sent by German Chancellor Angela Merkel to the first major international climate meeting since the start of the coronavirus crisis. Monday April 27 and Tuesday April 28, 11e “Petersberg dialogue” – a high-level political meeting, which takes place every year in Germany – brought together around thirty countries around environmental issues.

The EU, the first carbon neutral continent in 2050?

Angela Merkel, who spoke on videoconference Tuesday, said that the countries that signed the Paris agreement – more than 190 states – “Remain committed to its implementation” and plans to reduce greenhouse gas emissions, known as “NDCs”, ” must be enhanced. ”

→ READ. Coronavirus: a pandemic intimately linked to the environment

The German Chancellor thus called on the European Union to hold on to its ambitions, in particular the reduction of 50 to 55% of its emissions by 2030 (compared to 1990), in order to become in 2050 “The first carbon neutral continent”. This is a way of showing its support for the European “Green Deal” project, an ambitious program of the Commission but shaken by the alarming economic prospects of the post-Covid era.

In fact, the reference to the Green Pact is not trivial. Because the cost and the very heavy challenges of the recovery raise fears of a lower ambition in terms of climate protection. The day before, the European Commissioner for the economy, Paolo Gentiloni, had recognized that a bitter battle was going to start: “Politically and culturally, we will have strong opposition who will say that after this coronavirus crisis, this is not the time to talk about Green Deal, that we should talk about it in ten years”, he said. He believed that a postponement of the pact, on the altar of short-term economic priorities, would be ” a tragic mistake ”.

On Tuesday, during the Petersberg dialogue, UN Secretary General Antonio Guterres went in the same direction. Or more precisely, took the opposite view from the defenders of “business as usual” to see in the post-pandemic recovery a real “Opportunity to lead our world towards a path of resilience” climatic and social. “This meeting is very important in this regard, says Lola Vallejo, director of the climate program at Iddri, the Institute for Sustainable Development and International Relations: not only show that climate action has not stopped, but integrate it into reflections on economic recovery plans. This is crucial “. The latter recognizes, however, that “The context is extremely difficult”.

Calling for a more world “Green, clean, safe and prosperous for all”, Antonio Guterres, on Tuesday, outlined some paths: an ecological transition providing jobs, redirected investments, green taxation and strengthened international cooperation. Echoing the Chancellor, who, a few minutes earlier, reminded the ministers of the countries associated with this 11th Dialogue a lesson from the crisis: “The well-being of a country depends closely on the well-being of others, in a world as interconnected as ours”, insisted Angela Merkel.

The latter has finally sent another important signal, this time on biodiversity, often under the radar of international discussions. 2020 was to be a key year, with the holding in China of COP 15 on biological diversity, postponed to 2021 just like COP 26 on climate. For the Chancellor, the two challenges “Are of major importance”, especially in these pandemic times, which illustrates the close links between environmental damage and the spread of viruses.