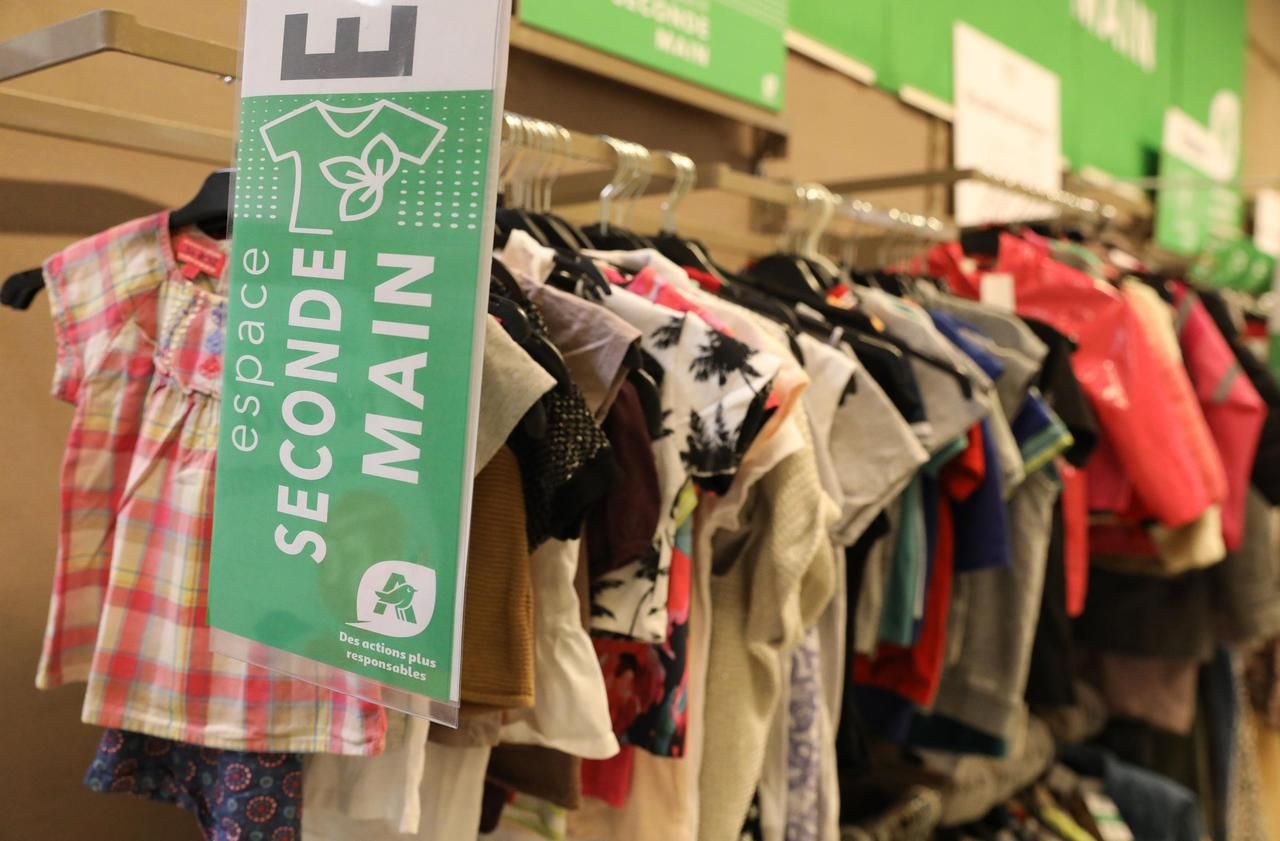 It is no longer taboo. It’s even very trendy. Today, buying a second-hand dress or coat has become a trivial matter. 40% of consumers did so in 2019, according to a study by the French Fashion Institute, compared to 15% ten years ago. For a number of them, it is out of ecological awareness. But for many others – 75% exactly – “low prices remain the main argument,” says Thomas Delattre, professor at the IFM. People no longer want to spend a fortune on clothes. And this, whatever their standard of living. “

And with the economic crisis, this is more true than ever. Enough to push “classic” brands to invest in this market, estimated at more than one billion euros, that Bon Coin but especially Vinted have helped to democratize.

Among the large retailers, Auchan, which launched in February, is the most advanced. Thirty of its hypermarkets have now installed a second-hand corner with a target of 100 in March 2021. “We sell on average 15 items per day and store, or between 400 and 800 per month”, welcomes the partnership manager of the ensign, David Decovemacker. Système U followed suit at the start of the new school year with five test stores offering 700 to 800 second-hand fashion items.

For a few days now, Carrefour has also been rolling out a similar offer in six of its points of sale (in Drancy, Villiers-en-Bière, etc.) “in order to respond to this new consumer trend which has become commonplace”, assures Bernard Swiderski, director of sustainable development for the group. Even the specialists in cheap fashion, Kiabi and Gémo, have just taken the plunge: the first has opened a 70 m2 corner in Louvroil (North) with a target of 5 more by the end of the year; the second has already deployed three (including one in Essonne) since the start of the school year. In the coming weeks, it will be Leclerc and Cora’s turn to get started.

What brands of items?

The items found in some and others are more “general public” brands (H&M, Camaïeu, Kiabi, Okaidi, Zara…). All of them work with the same partner, Patatam, a key player in this market. This online second-hand fashion specialist is responsible for sorting and restoring recovered clothing, in particular through operations carried out in “partner” stores where bags are made available to customers to send sweaters or dresses they want to part with. In exchange, they will receive a voucher of 5 euros to be used on the entire store or its textile department.

“Then we dispatch these clothes to the different brands,” says Eric Gagnaire, the co-founder. Each item is therefore “unique” and therefore cannot be displayed in several sizes and colors. “There is a lot of work to build the range on the shelves with some of the items that are from a different brand than ours”, points Estelle Urbain, in charge of the project at Kiabi. At Gémo, 50% of second-hand clothes offered are “house” products, the “rest is Zara, Lacoste, H & M … We have just banned certain brands, those of our direct competitors (Editor’s note Kiabi and La Halle) ”, Points out Renaud Montin, marketing and digital director of the brand.

At Kiabi, for example, you can find new children’s t-shirts at 2.50 euros while the used one is sold at 2 euros. “It’s still cheaper,” Estelle Urbain said, citing a reduction of “40 to 80%” compared to the “new” price. For both parties, the first feedback is also very positive even if we still have to wait a few months to know “if these corners will help attract new customers or cannibalize sales in traditional departments” , Renaud Montin point.

On the Net, Cdiscount and Zalando are also getting started

When it comes to second hand, Vinted is obviously a key player. With 12.5 million users in France (compared to 11 million at the start of the year), the platform has democratized this market. “A French user of Vinted currently buys an average of 17 items per year,” reports the online second-hand fashion specialist. And the health crisis has not slowed down this progression. On the contrary: “between February and May 2020, we saw a 17% increase in the number of articles posted on all of our platforms in Europe”, she continues. Le Bon Coin also benefited from a “Covid” effect with in May “a volume of fashion buyers up 13% compared to May 2019,” said a spokesperson for the site.

A dynamism that has not escaped other Internet players who have also decided in recent months to launch an assault on the second hand. This has been the case with Cdiscount since June which, thanks to a partnership with Patatam, offers several thousand pieces from around sixty brands on its site. You can find a Zara dress at 10.50 euros or even a Naf Naf sweatshirt at 11.20 euros. Since October, Zalando, the online fashion specialist, has also opened on its site a space dedicated to second-hand clothing where Levi’s women’s jeans sell for 23.90 euros, the Bogner sweater at 42.90 euros or even Kiomi pumps at 14.90 euros.

See Also:  Israel: A policewoman charged with firing a Palestinian on the back "for fun"

Every week, the environmental news seen by Le Parisien

“Customers buying second-hand items benefit from exactly the same services (free delivery and return according to market standards, payment option, size recommendation, etc.)”, specifies Ombline Delepoulle, France’s marketing manager for the online chain. Zalando takes care of everything, including the collection and sorting of items, only reselling those pants or sweater that customers sent him in exchange for a credit note or a donation to an association (la Croix Red or WeForest).