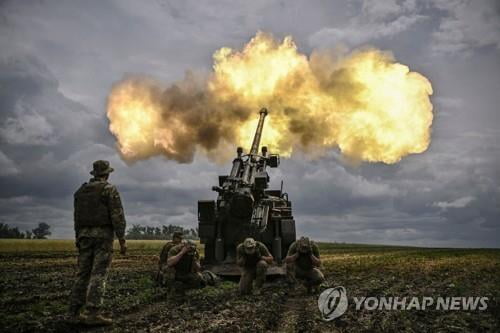 Biden Called Zelensky and Notified Directly… Defense Minister “Face the decisive moment”
Support of 7.2 trillion won since the opening of the war in February… Western countries, including the US, worry about prolonging the war

The U.S. has agreed to provide $1 billion worth of weapons to Ukraine, including howitzers and the Harpoon coastal defense system.

As Russia strengthens its attack on Donbas, etc. with its firepower advantage, there is an observation that the war in eastern Ukraine is developing in Russia’s favor.

Although this support is the largest single-arms support, there are also concerns about the possibility of a prolonged war in Ukraine in Western countries, including the United States.

According to a press release from the Ministry of Defense, out of the $1 billion in the aid, $350 million is due to the “Presidential Use Authority (PDA),” which allows the US president to transfer defense products ex officio without the permission of Congress.

This means that the U.S. military’s possessions can be transferred immediately.

The weapons included in this package include ▲ 18 155mm howitzers and 36,000 155mm shells ▲ 18 tactical vehicles for towing howitzers ▲ Cannonballs for HIMARS, a truck-mounted multiple rocket launch system.

The remaining $650 million will be raised through the ‘Ukraine Security Assistance Initiative’ fund.

The Ministry of National Defense is planning to start the contract process to purchase this material from the private sector and supply it to the Ukrainian military.

“The courage, resilience and determination of the Ukrainian people continue to inspire the world,” Biden said to Zelensky. will,” he said.

He also reaffirmed that he would stand on the side of Ukraine to defend democracy, sovereignty and territory against an unprovoked Russian invasion.

Apart from the arms aid, the US is also planning to provide humanitarian aid worth 225 million dollars (290 billion won) separately to Ukraine for drinking water, medical supplies and daily necessities.

Since the start of the war in Ukraine due to the Russian invasion on February 24, the United States has provided security assistance of 5.6 billion dollars (7.2 trillion won), including this aid.

The announcement of support was made while Defense Minister Lloyd Austin presided over a meeting of the Ukrainian Defense Liaison Group in Brussels, Belgium, with 40 countries in attendance.

“Ukraine faces a decisive moment on the battlefield,” Austin said at the meeting.

“We cannot relax or delay,” he said.

In addition, Secretary Blincoln shared the goals of the United States at the upcoming G7 and NATO summits.

The United States started providing additional arms support today to improve the war situation, but Western countries seem to be deepening their concerns as the war prolongs.

The cost of supporting the war continues to increase in a situation where the economic situation is not favorable due to inflation and high oil prices due to the war in Ukraine following the Corona 19 pandemic.

For this reason, some are wary of the need for Ukraine to concede part of its territory and a ceasefire.

In this regard, Secretary Blincoln appeared on PBS the day before and asked if Ukraine needed to make concessions to parts of the eastern part of the country, and he replied, “Ukraine’s future depends on the Ukrainian people.”