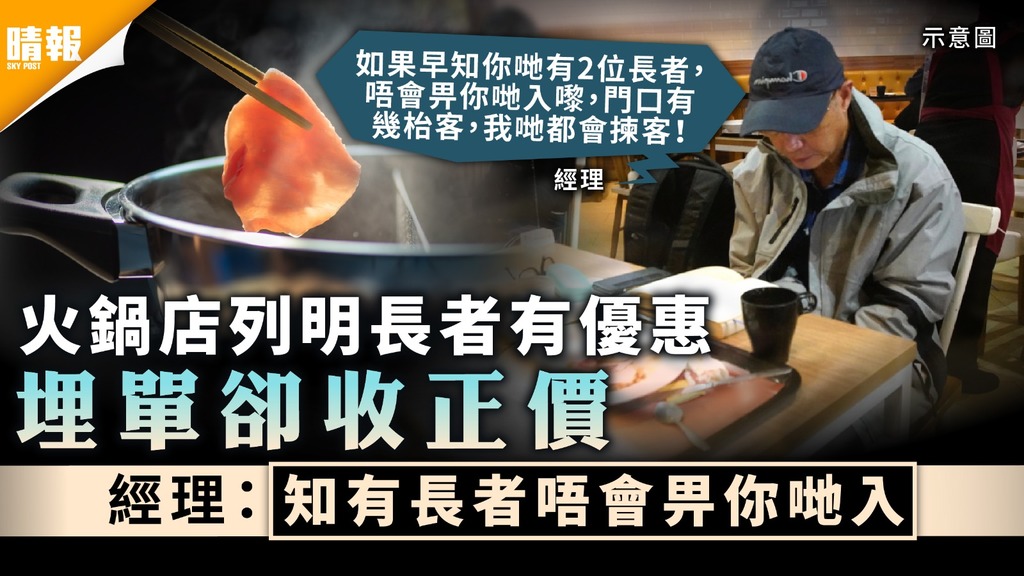 A Tseung Kwan O neighbourhood recently went to a hot pot restaurant with a per capita charge for dinner with his family. There were 2 seniors at the table, and the menu indicated that seniors could enjoy a discount. However, when the victim paid the bill, he found that the entire bill was calculated at the regular price. The manager insisted on canceling the recalculation of the bill, saying that the diners hadn’t made it clear before they took their seats. He even threatened that “if we knew that you had two elders, we would not let you in.” The incident aroused public outrage, and the restaurant finally apologized publicly and said that the incident had been dismissed.

A netizen posted a post on the Facebook group “Tseung Kwan O Home” in the early morning of Sunday (18th), saying that a family of six recently went to a hot pot restaurant in Tseung Kwan O for dinner and had two separate meals. After all the people were seated, he found that it was written on the menu that the senior citizens had a discount, so he asked the staff whether it was still applicable. The staff did not answer positively, and asked him to inquire with the manager;嚟”, I plan to process it at checkout.

Pay the bill and receive the discount for senior citizens

The victim pointed out that until the checkout, he found that all people were calculated at the regular price and there was no seniority discount. He stated that there were 2 seniors on the table who were over 70 years old and deserved to enjoy the discount. He asked the manager to recalculate but was rejected unexpectedly. ,

“(Qu) You can’t void (cancel) because I didn’t tell you beforehand. He asked me to pay for the bill and there are no elders! I asked for the void again. I can’t answer, because the order has already been issued. degree.”

The victim decided to pay the full price to settle the matter, but before leaving the restaurant, he couldn’t bear to feel uncomfortable. He bluntly said to the manager: “The service is so good.” Unexpectedly, the other party suddenly said something in his heart, making them even more angry.

“(Qu) If I had known that you had 2 elders, we wouldn’t let you in. There were a few customers at the door, and we would pick them up. See your family and ask if you have a seat, let’s ask. Let me first place you.”

The restaurant is dishonest

The victim said that after they took their seats, they looked at the menu and found out that they could enjoy the senior citizens’ discount. The two elderly family members had senior citizens cards, which could be presented at any time. How could they expect that no staff came to find out before they took their seats until they settled their bills? And reminded, did not respond to their enquiries, angrily criticized the restaurant for dishonesty,

“It turns out that there is an unclear stipulation to pick customers! No wonder people of all ages at the door have the word “wait”! There is a conspiracy and a plan to ask customers to pay the full fee, no misunderstanding or unintentional mistakes! Straightforward! I would like to bury the opportunity to complain about the discrimination against the elderly!”

The posts sparked heated discussions in the group. Netizens accused the restaurant involved in doing business dishonestly, calling on the victim to lodge a complaint with the relevant department, and leave a message on the restaurant’s Facebook page, asking the restaurant in question to respond to the incident:

The restaurant involved: the manager on duty has been fired and the victim has been contacted for compensation

In the evening on the same day that the victim posted the post, the restaurant in question posted a response on a special page, stating that after learning about the incident, he discovered that the restaurant manager had seriously made a mistake in handling, causing the victim to lose money. After the board meeting decided, the manager on duty has been immediately dismissed, and the victim has been contacted to deal with compensation and apology, promising to strengthen management in the future.

Violation of the Trade Descriptions Ordinance can be fined up to $500,000 and imprisoned for 5 years

According to the “Trade Descriptions Ordinance” (Chapter 362), the Ordinance prohibits false trade descriptions and misrepresentations of the goods provided in the course of doing business to protect consumers. The Hong Kong Customs is responsible for enforcement. Common bad business practices used by consumers include: false product descriptions, misleading omissions, intimidating business behaviors, bait-inducing advertisements, bait-and-sell behaviors, and improperly accepting payments. Once convicted of the above crimes, the maximum penalty is a fine of 500,000 yuan and imprisonment for 5 years.

U Lifestyle App’s own programs are registered in the “U TV” area!
↓↓Try playing, tasting, and trial videos for you to watch↓↓
【Experience now】