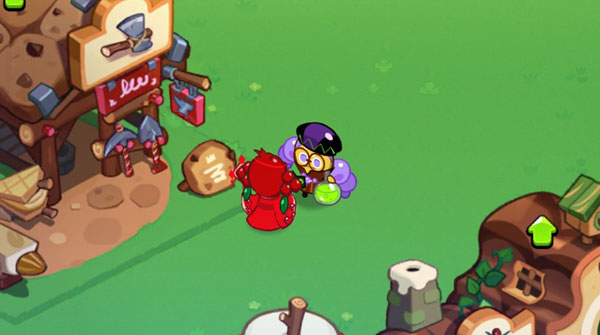 Released in January of this year, Cookie Run: Kingdom is considered an exceptional success story in the industry. In the mobile market, where PvP-oriented MMORPGs, represented by Lineage M, dominate the mobile market, it is a game that combines social games and collectible RPGs that are considered out of fashion. In addition, co-PD of Cookie Run Kingdom Lee Eun-ji explained, “Usually, the number of users will drop after 2-3 months of release, but it is maintained even after 4 months.”

The part that impressed the reporter the most while playing Cookie Run: Kingdom was that the cookies were expressed in great detail. In particular, when running a village, each cookie has a different way of working at the facility, and the behavior they show while walking around the village is not the same. Even for the same action of sweeping with a broom, each cookie has its own animation. From a game journalist’s point of view, you might wonder, ‘Is it necessary to make it this detailed?’, but from the user’s point of view, it’s fun to see the cookies chatting and playing in the village.

In fact, in Cookie Run, users’ secondary creations are active. When maintenance takes a long time, users express their disappointment with memes made with cookie characters, and there are not a few users who share fan art drawn with care. Cookie Run: Kingdom and existing work settings are explored and played while anticipating future cookies, stories, and content to be added. It is safe to say that the secret to the success of Cookie Run: Kingdom is the ‘sniping of virtue’ that draws affection.

There are also important keywords at the root of the Cookie Run: Kingdom development team, which provides unnecessary details in a social game in a way. That’s ‘love’. This is because I wanted to convey the feeling of love to users through Cookie Run, and for this, I decided that the details that seemed excessive were important. In ‘Cookie Run Kingdom Post Mortem’ held at NDC 2021, the journey that the development team struggled for 4 years to complete ‘Details for Love’ was included.

At a non-stop meeting for 3 days and 2 nights, we decided on a concept to convey ‘love’

Cookie Run: Kingdom PD Jo Gil-hyeon and Lee Eun-ji both have been making IP games for 10 years. Producer Eunji Lee said, “I literally dedicate my youth to Cookie Run, and they were the people who understood and loved the world of Cookie Run the most.” “Cookie Run is a very cute and sweet world, but I thought that if it was cute, I could not feel affection. “I thought there was a meaningful and sharp story behind the synopsis of the brave cookie who escaped the witch’s oven because he didn’t want to be eaten.”

Devsisters, who have been concentrating on run games, decided to try a different genre this time, starting with the question, ‘What kind of scenes do users who like Cookie Run want to see?’ To this end, in 2016, the early members of Cookie Run completed the initial direction by continuing the march of “Eat and have a meeting, eat and have a meeting” in Jeju Island for 3 days and 2 nights. Cookies who escaped the oven live as a kingdom and continue their journey, showing the journey to find the meaning of existence.

So both kingdom building and cookie adventure were necessary for Cookie Run: Kingdom. The meeting of social games and collectible RPGs was a concept that was built by recalling scenes that users want to see rather than starting from a genre. At the conference that lasted for 2 nights and 3 days, the name, screen composition, UI, and initial design of Cookie Run: Kingdom were all picked up, and the prototype came out in two months.

The reason why the development team risked their lives on the details while making Cookie Run: Kingdom is to elicit ‘user love’. Because in order to elicit love, Cookies and the Kingdom have to feel like they are in reality, and for this to work, they decided that the details were necessary. Producer Cho Gil-hyeon said, “I thought that falling in love with the world in the game is the core of Cookie Run: Kingdom, and that users can love and immerse themselves in a world that the development team can love and immerse themselves in.”

In response to the question ‘who founded the cookie kingdom and why did it perish’ that came up during the work, the development team stopped working and worked hard on the history books, encyclopedias, and maps of the kingdom in the game for a month to preserve the details. Producer Eunji Lee said, “The story of the founding of the nation, location, natural environment, vegetation, industry, national character, and food culture are also included. I thought that the world I could love was a place with details that seemed to exist in reality. Didn’t the Lord of the Rings even make an elven language?”

The obsession with detail was not lost in the process of making cookies, which can be called the main characters. Producer Jo Gil-hyun said, “I put a lot of effort into each cookie setting, animation, and voice. This is because they judged that Cookies must also have a sense of reality for love to spring up. It may seem superfluous, but I thought these details made me fall in love with the cookie kingdom and cookies.”

To do this, the development team must exert its full potential in ’emotion and delivery’ and, if necessary, go through the process of convincing outsiders by concentrating on core values. A clear goal of the development team in the arduous process is the driving force behind the project. Producer Eunji Lee said, “During the development, another part of the question was ‘Will this happen?’ Even in this process, I made it with the thought that if it is a game we can love, someone will definitely love it.