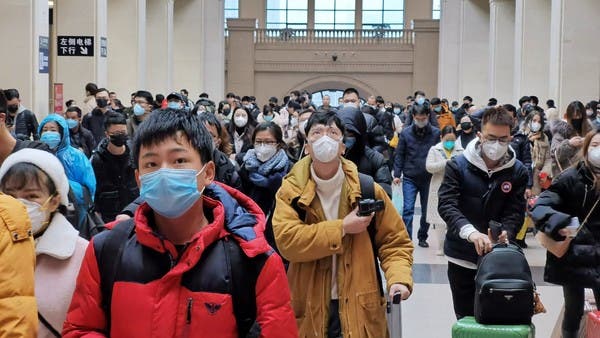 Face to face with the global economy, which is grappling with the stages of uncertainty, the fatal Corona virus has been solved as a ominous sign of the prospects and expectations of economic growth in various countries of the world, to deepen the suffering of analysts in deciphering the likely date to get out of recession fears.

An earlier study by the International Monetary Fund, seen by Al Arabiya.net, estimated the annual cost of the spread of the influenza virus at about half a trillion dollars due to the consequences related to the decline in work productivity, high deaths and the impact of trade.

In addition to these major fears, deepening uncertainties, restrictions on travel, and decreased demand for assets, as well as the disposal of risky assets by investors, with the psyche of stock traders, affected by fears arising from the outbreak of the virus.

And spread the new Corona virus, from the Chinese city of Wuhan, threatening millions of people with death, to other cities and countries in China, Europe, America, and others, after the outcome of his catastrophe reached more than a hundred deaths and infected thousands.

And at the risk of the devastating danger, oil prices tumbled 4%, after the Chinese authorities hit a quarantine on 9 million people in Wuhan, the origin of the disease.

In oil markets, fears increased that China is the largest consumer of crude in the world, according to oil expert Kamel Al-Harami in a previous interview with Al-Arabiya, in which he made it clear that the world is looking to China as a key locomotive in growth, and that its economy affected by this pandemic will have severe consequences for its oil imports. And its consumption of various raw materials, and thus affected the economy of countries associated with China.

But the Organization of Petroleum Exporting Countries, Saudi Arabia and the UAE reassured the markets with a limited impact of the virus on crude prices, and in the Saudi stock market trading session yesterday, the index fell 1.8% in one day due to concerns, and in Tuesday’s session, the Saudi market index was still resisting the decline.

Oil futures settled on Tuesday after declines over the past five days due to fears that demand for crude will be negatively affected after the outbreak of the new Corona virus in China, while some analysts indicate that the decline may have ended.

Brent crude, the world benchmark, fell four cents to $ 59.28 a barrel. On Monday, it reached its lowest level in 3 months at $ 58.50 after the outbreak of the virus led to global sales of high-risk assets.

China’s virus suffered the worst daily performance in Europe, nearly four months ago, in yesterday’s session due to concerns about the potential impact of the spread of the Corona virus on companies.

See Also:  Zero percent new car tax is considered difficult to boost sales, this is the reason page all

Airbus topped the list of high shares on the benchmark, after the company said it had agreed to reach a settlement with the French, British and American authorities regarding an investigation into allegations of bribery and corruption.

Luxury goods maker Burberry Group, LVMH and Caring, owner of Gucci and Moncler, rose 0.4% to 0.6%. Shares were among the worst performers on Monday, when the broader benchmark fell more than 2%.

And the sub-index for the travel and entertainment sector gained 0.2%, after dropping to its lowest level in nearly seven weeks in the previous session, due to restrictions on travel.

US stocks deepened their losses by receiving the biggest hit or fall of Wall Street indices in three months during yesterday’s session.

And European airlines canceled flights to China and received the price of tickets, which threatens for major losses in the sectors of aviation, tourism and travel, which China is a main source of tourists in various countries of the world.

The cost of insurance

The cost of securing exposure to China’s sovereign debt rose to its highest level since mid-October, amid growing concerns about the potential economic impact of the virus.

China’s credit risk swaps for five months jumped four basis points from last Friday’s close to 41 basis points, according to data released by IHS Market. The contracts were closed at 30 basis points a week ago.

The virus, which has been completely closed for more than a week in Wuhan, cut travel by tens of millions, coinciding with the biggest holidays of the year in China.

See Also:  Volkswagen is celebrating 45 years of the Golf GTI with a special edition

Market experts cannot quickly determine the expected impact of the virus on the economy, but the daily impact of stock and financial assets trading is subject to the capabilities of countries to control and the extent of the virus outbreak, according to Walid bin Ghaith, a member of the Saudi Economic Association, to Al-Arabiya, which expected countries to be able to deal with This virus.