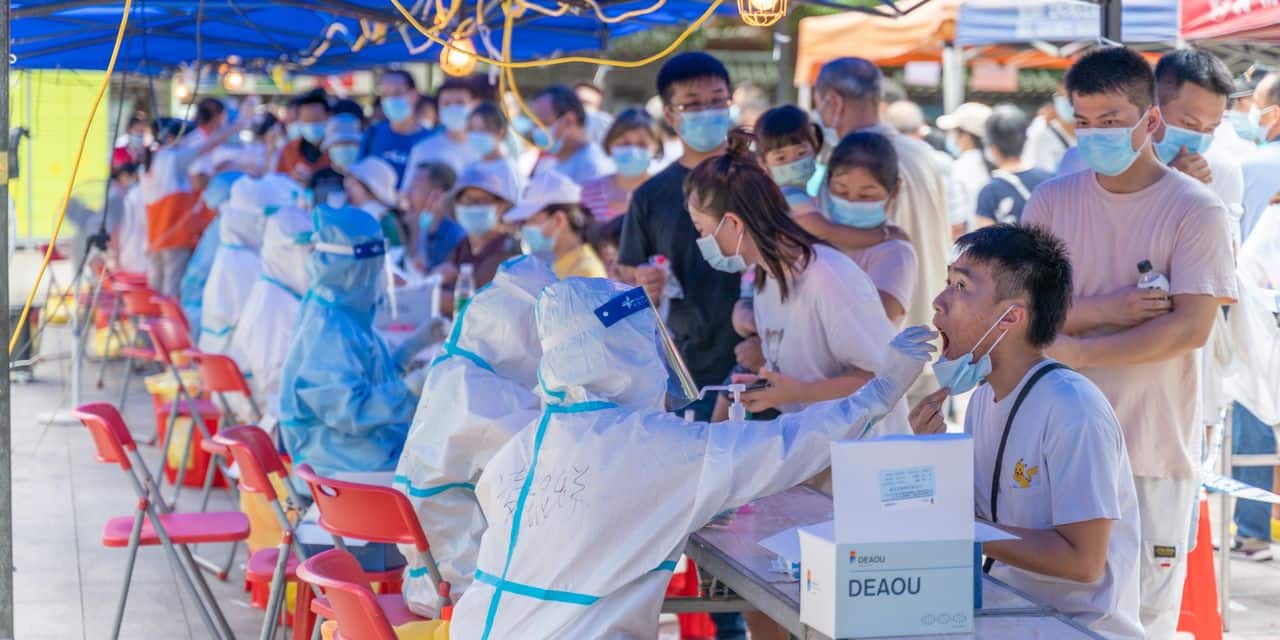 Vietnam has discovered a new variant of the Covid-19 virus, which is transmitted quickly through the air, and is a combination of the Indian and British variants, state media reported on Saturday. The news came as the country faces a new wave of contaminations in more than half of its territory, including industrial zones and major cities, including Hanoi and Ho Chi Minh City.

Vietnam had until recently been very little affected by the virus. The majority of the 6,700 reported cases and 47 deaths have been recorded since April. “We have discovered a hybrid variant combining the Indian and British virus,” Health Minister Nguyen Thanh Long said at a national meeting on the pandemic on Saturday.

“The main characteristic of this virus is that it is transmitted quickly in the air. The concentration of virus in the throat and saliva increases rapidly, and it spreads very quickly in the nearby environment,” he said. Explain.

Twenty cases of Covid-19 were reported last week in this industrial center in northern Hong Kong, which has a population of some 15 million. A notice from the Guangzhou Municipal Health Bureau released on Saturday identified five streets in Liwan District in the city center as “high-risk areas” and ordered residents to remain confined until drug tests. door-to-door operations are completed. Markets, schools and entertainment venues in this area have been closed. Local authorities have started mass screening tests of the population which had included 700,000 people up to Wednesday. The emergence of cases in Guangzhou is linked, according to local health officials, to a 75-year-old woman with the variant that appeared in India.

End of “confinement” in the Netherlands on June 5

Dutch Prime Minister Mark Rutte announced on Friday the end of “containment” from June 5 with a new round of easing of restrictions against the coronavirus, in particular allowing restaurants to welcome customers inside.

Italy simplifies the procedures of its recovery plan

The Italian government adopted a decree on Friday simplifying administrative procedures, in particular for public tenders, and organizing the management of funds for the important post-Covid recovery plan financed by the European Union.

The United Kingdom has approved the vaccine from the American pharmaceutical group Johnson & Johnson, which adds to those of Pfizer / BioNTech, AstraZeneca and Moderna, already used in the country in the fight against the pandemic.

The European Medicines Agency (EMA) on Friday approved the use of the anti-Covid Pfizer / BioNTech vaccine for 12-15 year olds, which becomes the first vaccine to be authorized for adolescents in the 27 countries of the Union European.

Patents “should not be a barrier”

Patents on anti-Covid vaccines “should in no way be a brake” on the immunization of populations, the South African and French presidents said in unison, during a visit by Emmanuel Macron to Pretoria.

Cuba denounces the effect of the embargo on its vaccination campaign

Cuba, which has developed five candidate vaccines against the coronavirus, accused Friday the strengthening of the American embargo of having delayed its vaccination campaign.

Reopening of terraces in Quebec

Eight months after the restaurants were closed due to the pandemic, Quebeckers were able to enjoy the joy of being on the terrace on Friday with the lifting of many anti-Covid restrictions.

After more than a year of very restrictive measures against Covid-19, Gabon is easing some of them, including the curfew, and exempting vaccinated people, but imposing a 24-hour quarantine for international travelers, announced on Friday. President Ali Bongo Ondimba.

The Japanese government has extended the state of emergency in force in part of the archipelago in the face of Covid-19, until June 20 now, almost a month before the opening of the Tokyo Olympics (July 23 – August 8).

The WHO, urged by the United States and the European Union to launch a new investigation into the origins of Covid-19, complained on Friday of the numerous political interference and asked that scientists be left to work.

70% of the population vaccinated to end the pandemic

The Covid-19 pandemic will not be over until at least 70% of the world’s population has been vaccinated, warned the European director of the World Health Organization on Friday, who is worried about the highest contagiousness observed for new variants of the virus, including the Indian variant.

The pandemic has killed at least 3.51 million people around the world since the end of December 2019, according to a report established by AFP from official sources Friday in the middle of the day.

These figures, which are based on daily reports from national health authorities, are generally underestimated. They exclude the upward revisions carried out a posteriori by certain statistical organizations.

By taking into account the excess mortality directly and indirectly linked to Covid-19, the WHO estimates that the real toll is “two to three times higher”.

According to an AFP count on Friday at 2 p.m. GMT, the seven countries currently deploring the highest number of deaths from Covid-19 compared to their population are located in Central and Eastern Europe.