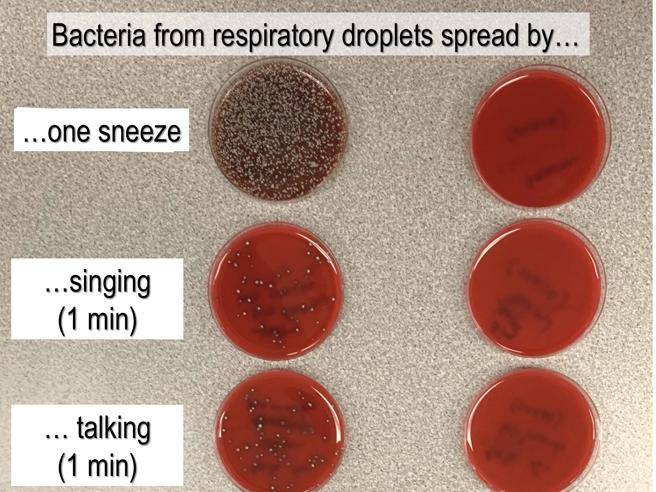 While it seems that in some contexts the masks have been forgotten and the decision of the Lombardy Region on the maintenance of the obligation to wear the masks even outdoors, expiring on June 30, is expected on Monday, an empirical (but very effective) “demonstration” of the filtering power of the masks comes on social media from Richard Davis, Director of the clinical microbiology laboratory at Providence Sacred Heart Medical Center in Spokane, Washington. The professor studied an experiment that went viral.

«What does a mask do – wrote Davis on Twitter -? Blocks respiratory droplets from the mouth and throat. Two simple demonstrations: first, I sneezed, sang, spoke and coughed towards an agar culture plate with or without a mask. The colonies of bacteria show where the droplets have landed. A mask blocks practically all of them ». The demonstration is shown in the photo below. Obviously in this case it is bacteria that are normally present in people’s respiratory droplets (large and heavy ones) and it is not SARS-CoV-2 virus, but you can see how a surgical mask blocks most of the droplets.

The second demonstration explains the relevance of the spacing together with the effectiveness of the masks. “I put the open bacterial culture plates 2, 4 and 6 feet apart and coughed for about 15 seconds. I repeated the experiment without a mask, “writes the doctor. The distances are 60 cm, 120 and 180. As can be seen from the number of colonies of bacteria, the droplets have mostly landed at distances below 180 cm, but the mask has blocked almost all of them (see photo below).

It is a demonstration and not an experiment

Davis is also aware that there is nothing “scientific” in his demonstration but “the colonies of normal bacteria that come from my mouth / throat – he writes – show the dynamics of the spread of large respiratory droplets, like the ones we think mainly spread # COVID19 and how a mask can block them! ».

The use of masks together with social distancing and hand washing remain effective anti-contagion measures and without negative impact as the closures of entire production sectors, activities or the limit of marriage towards people can have. Beyond what the ordinances prescribe, they depend entirely on us and are part of that commitment that, as citizens, we can put in place against the virus. We know that the virus prefers gatherings and closed and crowded spaces. We then regulate the use of masks based on what we have learned so far and the circumstances.

United Nations Investigating a Scene like that in a Service Car, the Actor Turns Out

2 thoughts on “Coronavirus masks, with or without: here’s what happens”