The Ministry of Health reported that they have died in the country 194 people for coronavirus and 3,441 cases of the disease have been detected. In addition, the director of the National Blood Transfusion Center Jorge Trejo Gómora, explained that it is investigating whether the plasma of the blood of recovered people It serves as a treatment in seriously ill patients.

According to data from the agency, in the last 24 hours, 20 deaths and 260 cases of coronavirus were added, which increased mainly in Mexico City, where 55 new infections were reported.

In addition, from Thursday, April 2 to Thursday, the country went from having one thousand 510 cases of coronavirus and 50 deaths, to having 3,441 infections and 194 deaths; which implies an increase of 1,931 infections and 144 deaths.

Coronavirus cases in Mexico by state

Mexico City is the entity with the most number of cases in the country and is 91 infections from reaching 1,000 covid-19 patients. Meanwhile, the State of Mexico is close to reaching 400 infected.

The country’s capital, the State of Mexico and Baja California are the only entities that have exceeded 200 cases; while seven states have between 100 and 199 infections; while the rest of the entities have less than 100 infected.

Colima remains the entity with the fewest cases of coronavirus and is the only one with fewer than ten patients with the disease.

Map of coronavirus deaths in Mexico

Mexico City is also the state with the highest number of deaths from coronavirus; followed by Baja California, which in a week went from having no deaths, to being 16. 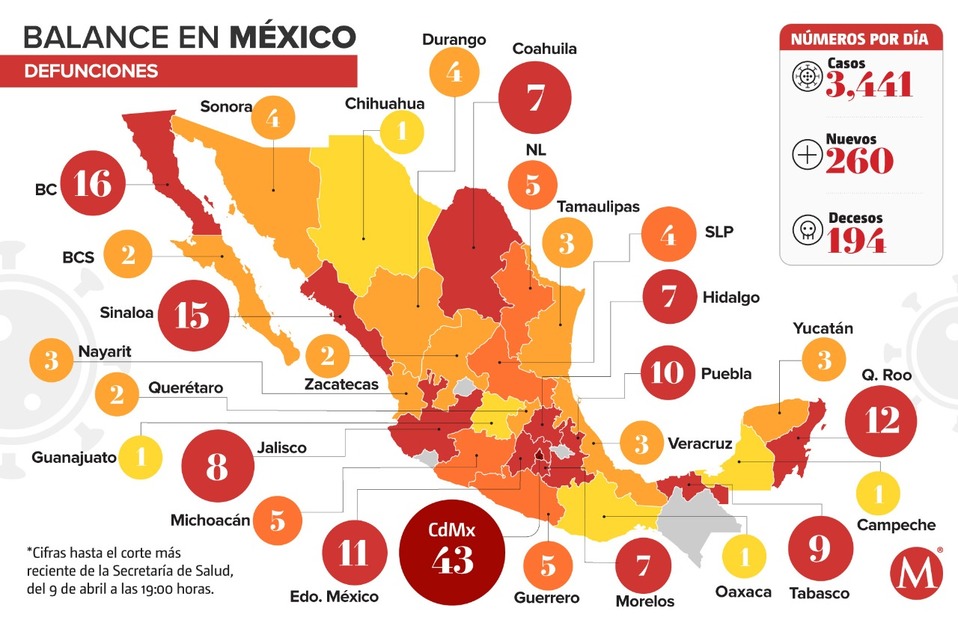 The former socialist minister and former president of the Generalitat of Catalonia, José Montilla (PSC), will have to explain...
Read more

The former socialist minister and former president of the...
Read more

The former socialist minister and former president of the...
Read more
News

“Operation Delivery”: Band stole vehicles on demand and left them at home

750 euros fine for an outdoor pilates class… the spirit or the letter?

The former socialist minister and former president of the Generalitat of Catalonia, José Montilla...
Read more