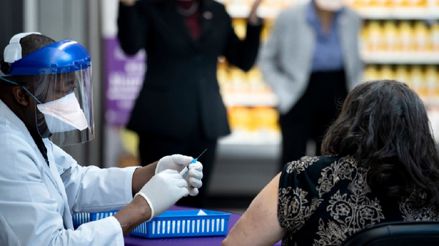 The president of the U.S, Joe Biden, celebrated this Thursday that the country has already administered 50 million doses of the COVID-19 vaccines, which he described as a “huge milestone” in order to defeat the virus.

“In the last five weeks, U.S has administered more vaccines than anywhere else in the world (…) The more people are vaccinated, the faster we will be able to defeat the virus, “said Biden at an event with Vice President Kamala Harris, in which several citizens were inoculated.

The president, who came to power on January 20, promised 100 million vaccines in his first 100 days in the White House.

“We are already halfway there,” he stressed. The first vaccine was inoculated in the United States on December 14.

Although the number of infections and deaths from the coronavirus is on the decline, U.S It is the country hardest hit by the pandemic with more than 28 million cases and more than 500,000 deaths, according to data from the independent count from Johns Hopkins University.

Experts consider that the evolution of the data has mainly to do with vaccination, which next week could include a third vaccine, the single dose of Johnson & Johnson, to those already available from Pfizer/BioNTech and Modern.

Biden has indicated that he hopes the United States has enough doses to vaccinate against COVID-19 to almost its entire population, about 300 million people, at the end of July, after reaching new agreements with Pfizer and Moderna, and the foreseeable approval of Johnson & Johnson.

See Also:  Chile will vote next April if it wants a new Constitution

“Living space”: Studies in South Africa have shown that Novavax’s Covid-19 vaccine is not effective against the variant of the virus discovered in that country. Have all the vaccines developed have the same results?