Coronavirus | “We feel that Peru has abandoned us”: the testimony of mother and daughter stranded in Canada | COVID-19 News

Mrs. M.S. and her daughter M.R. (They asked to reserve their identity) They have been in a hotel room in Toronto for five days, very close to the airport where they dream of entering very soon to board a plane to Peru. Its history is, unfortunately, very similar to that of thousands of Peruvians who cannot return due to the measures imposed to stop the advance of the coronavirus in the country.

Like dozens of compatriots stranded in Canada Due to the pandemic, both moved from Montreal to Toronto on Saturday after the Peruvian authorities warned them of a flight that would leave for Peru on Sunday, but finally they were not included in the passenger list.

Each time with less money and without more information, the Peruvians had no other option but to seclude themselves at the hotel, from where they communicate with the Peruvian consulate through emails and with their distressed family in Lima through WhatsApp.

“We are supporting ourselves, we are in the hotel from Saturday, seeing everything, seeing what to eat. We are paying for everything, but as I told the consulate in an email I no longer have a budget, I no longer have any more and I do not know what I am going to do“Says the mother to Trade over the phone.

Her daughter, a 21-year-old Administration and Marketing student, adds that the situation is particularly difficult due to the measures dictated in Canada to face the COVID-19. “Now we are here at the hotel, it is difficult because we have nothing. We don’t know what else to do, we can’t leave the room, almost everything is closed. We don’t have food, we’ve been eating chips. We have been eating this type of food since Saturday because it is the cheapest and we no longer have a budget”, Relates to this newspaper.

The mother arrived in Montreal from Peru on February 20 to spend a few days at her sister’s house. Her daughter joined her two weeks later, after finishing the Work and Travel program in Colorado, United States. The plan was for them both to spend a few days with their family in Canada and then they will return to Peru together. His return ticket was dated March 20, but, as it happened with other Peruvians who are abroad, the closure of borders ordered by the Peruvian government stopped all his plans.

“After Air Canada canceled a second flight scheduled for Monday the 16th [último día antes del cierre de fronteras], I went directly to the Montreal consulate, I was practically the first to arrive because the consul came out and told me that they knew nothing and only pointed me on a list. I left my email and since then the links began to arrive for us to register, we did it and the communications began in which they told us that everything possible was going to be done and that nothing was known yet.“Says the mother of the family. 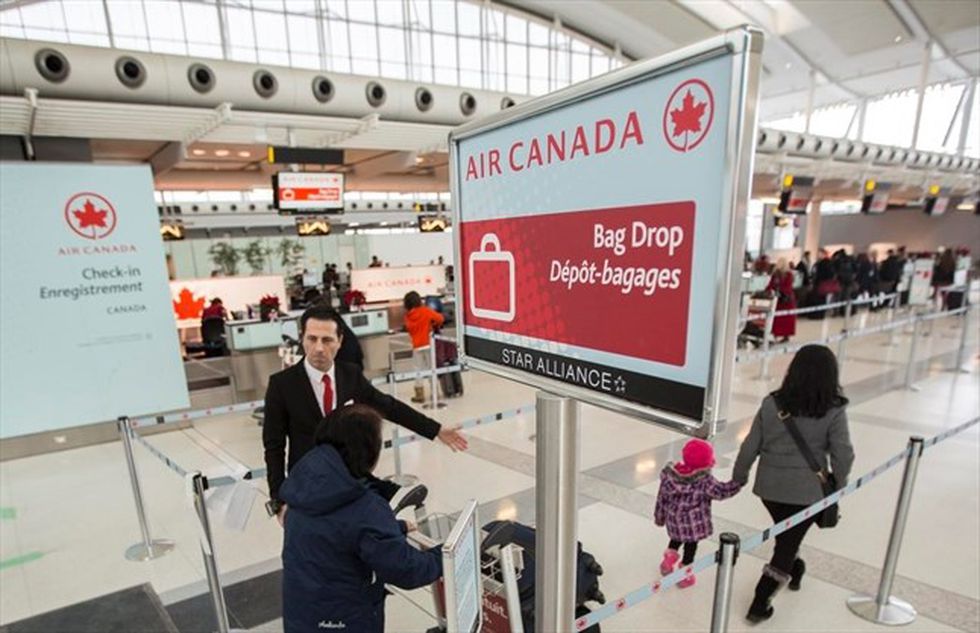 Air Canada has canceled several flights due to the pandemic.

Throughout this process, she and her daughter stayed at their relatives’ home in Montreal. Until the last Saturday, around 3 in the afternoon, they received an email from the Peruvian consulate.

M.S. He says that in this email the authorities asked them to travel urgently from Montreal to Toronto because a flight was going to leave Peru on Sunday. “At that moment I ran to the airport, almost crying, I asked for tickets and we flew to Toronto, but as soon as I arrived they told me that the flight was no longer leaving on Sunday, but on Monday. It was at that moment that I looked for a hotel near the airport“

However, in a later communication, she was informed that the flight was no longer going to depart on Monday, but on Tuesday, but with only 40 Peruvians and no longer with the 220 who had registered, according to the consulate. The Peruvian claims that of the group that was urgently moved from Montreal, she was the only one who stayed.

“They told me that of those 220 the Peruvian government had chosen 40 people, we do not know under what criteria, the consulate told us that it did not know anything either. At that time I thought they would put us on next flights because we know that another one leaves this Thursday and another one on Friday. But finally they told us that those two flights are going to be empty because only Canadians and not Peruvians are going.”, He relates.

The situation has not changed so far. In the last email received on Wednesday night, the consulate reiterated that the two flights that will depart in these days of Canada they will not take Peruvians to Peru.

Uncertainty and the lack of clear information and support from the authorities make the wait increasingly distressing. “The most difficult thing is to feel that your own government does not want to receive you and does not give you an explanation, I feel abandoned by Peru practically“Says the woman.

A woman walks in the arrivals hall of the Toronto Pearson International Airport terminal in Toronto. (Photo: AP)

“What we ask is that they let us return to the country, that they repatriate us on the available planes or in any case that they send us a plane, but that they return us because here we can no longer survive, in a country that is not ours, we do not have our things, we have nothing“He adds.

She states that their situation is particularly critical since she and her daughter suffer from a genetic condition that makes them require medicines that have already run out. He also points out that they no longer have medical insurance since their validity ended on the day they were originally scheduled to return to Peru.

For her part, M.R., who has had to start her university classes virtually from the hotel, insists that flights from Canada to Peru. “The authorities must try to return us, the Peruvians who are stranded in Canada we are less than 300. There are flights from the United States in which my Work and Travel friends are returning, they are completely full planes. It is unfair that they have taken 40 Peruvians since Canada when we could all have got on that plane“He points out.

“The only thing the consulate told us when it learned that these flights will not carry Peruvians is that we return to Montreal and that they are going to find us a place to stay,” says his mother.

The Peruvian says she does not want to think about what she will do when she runs out of resources. “I tell myself that we will live day by day with what comes out, with what we find, we do not know. As I say to my daughter, I don’t want to think anymore because I’m dying, I’m getting sick“

What is the coronavirus?

He coronavirus recently discovered causes infectious disease by coronavirus COVID-19. Both were detected after the outbreak that occurred in Wuhan (China) in December 2019.

Fatigue, fever and dry cough are the most common symptoms of COVID-19; however, some patients may experience nasal congestion, pain, runny nose, sore throat, or diarrhea.

Although the majority of patients (about 80%) recover from the disease without the need for any special treatment, about one in six people who contract the disease COVID-19 You develop a serious condition and have trouble breathing.

To protect yourself and prevent the spread of the disease, the WHO recommends washing your hands with soap and water or using an alcohol-based disinfectant that kills viruses that may be on your hands. In addition, a minimum distance of one meter should be maintained in front of anyone who sneezes or coughs, because if you are too close, you can breathe the droplets that harbor the virus of the COVID-19.

Prince Charles of England has the coronavirus. (AFP).

Hoekstra after agreement Eurogroep: ‘It was not without a struggle’ | NOW

After the failed marathon meeting on Tuesday...
Read more

One condition .. Mortada Mansour settles the controversy over the contract with Ashour and Fathi

Mortada Mansour, Chairman of the Zamalek Club, revealed the possibility of the club contracting with Ahmed Fathi and Hossam...
Read more

Infinix launches its latest Note 7 phone, with a strong battery that lasts for days, price and specifications

While the government confirmed the reinforcement of controls for the Easter weekend, the mortality figures for the epidemic showed...
Read more

Hoekstra after agreement Eurogroep: ‘It was not without a struggle’ | NOW

One condition .. Mortada Mansour settles the controversy over the contract with Ashour and Fathi

Sebastian Kurz, a chancellor at the end of the tunnel

“In this crisis, we must act in the explicit knowledge of our non-knowledge”

The mafia helps selflessly the poorest in Italy