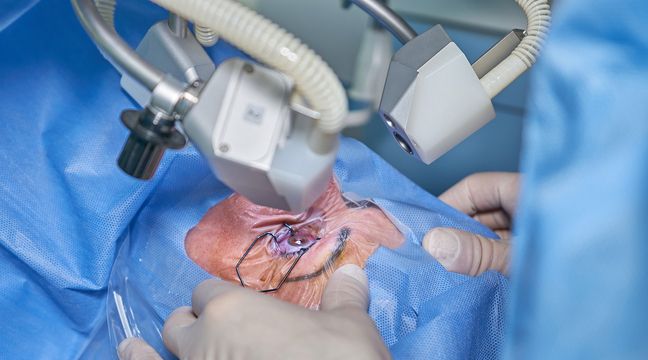 A very vague world. Since the start of the Covid-19 crisis and the wearing of masks indoors and outdoors, the lives of eyeglass wearers have clouded over. And if some have switched to lenses, others cannot stand them. So much so that a large number of French people have turned to
corrective surgery.

“It is obvious that demand has really increased,” assures Romain Nicolau, ophthalmic surgeon in Paris. Patients ask us a lot more questions, even if they don’t want to have the operation right away. And for those who were in doubt, having the steam all the time was a decision accelerator. “According to figures from the Société de l‘French Association of Implants and Refractive Surgery (Saphir), there would have been a 20% to 30% increase in the national demand for surgical operations during the health crisis.

“Before Covid-19, I was on six interventions a week. Today, between 12 and 20 ”, confirms Romain Nicolau. Same observation on the side of Jérémie Barbier, member of the French Society of Ophthalmology (SFO), who practices in Lyon. “Clearly, wearing a mask has gradually increased this demand. Between 20 and 25% more, depending on the exchanges I had with my colleagues. “” Since the Covid-19, we advise to avoid touching your face. Some felt that it was easier and more hygienic to go through the operation rather than keeping lenses, ”adds Jérémie Barbier. It is true that when you lose a lens in the metro, fiddling with your eyes after touching the bar in the middle of the car is not entirely recommended …

Beyond fogging and hygiene, there are the factors of time and money. Refractive surgery is not covered by Social Security. It is therefore not reimbursed and does not give the right to sick leave. However, between unemployment, the lack of outings and teleworking, some French people were less reluctant to take a few days off or to take advantage of this time to recover from an operation. “And some had more money, savings having never been so high”, continues the ophthalmologist from Lyon.

Eye surgery has also benefited. Because with the wearing of the mask, we only see the top of the face. “And with the proliferation of video meetings, many saw themselves on the screen and noticed their eyelids drooping, adds Jérémie Barbier. There have been many requests for cosmetic surgery in an older patient population, in parallel with the request for refractive surgery. “

One operation for many problems

But how does this corrective operation take place? The goal is simple: to do without glasses… or contact lenses. “We have a lens ‘capital’. In other words, depending on how they were worn, it is not uncommon for people to be embarrassed after a while, ”warns Jérémie Barbier. A risk that affects people unequally, without being a necessary step either. But when you suffer from dry eyes, the equation of contact lenses and hot air rising from the mask can clearly encourage surgery.

The operation is performed under local anesthesia, with eye drops, on an outpatient basis and only lasts a few minutes. “The laser is offered 90% of the time,” explains Romain Nicolau. When you are nearsighted, either you have an eye that is too large, so thanks to the operation, you will thin the cornea. Either the cornea is too arched, and the laser makes it possible to find a normal arch. “” We are going to artificially change the refraction, adds Jérémie Barbier. It is as if you were integrating a lens without adding anything. “

But before entrusting the apple of your eye to a surgeon, a few examinations are necessary. In order to check, in particular, that you do not have eye disease and that your cornea is thick enough. Another contraindication: “severe dryness leading to irritation of the cornea – keratitis -, which will make you a veil in front of your eyes. The fact of operating can worsen this veil, ”continues Romain Nicolau.

But he reassures: “We cannot end up blind with this operation! The side effects of the procedure are dry eyes, and in most cases, it lasts a month. Sometimes patients see small halos, especially at night. Over time, it fades. The brain gets used to it, as with tinnitus. “