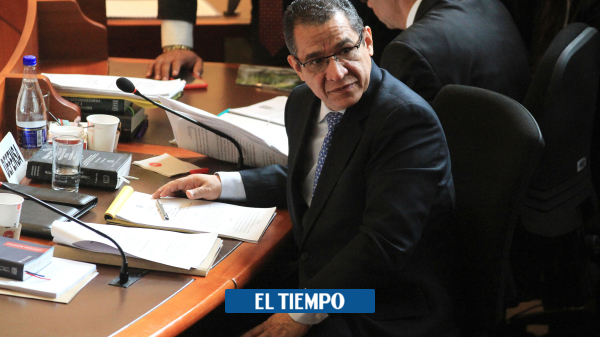 The Special Trial Chamber of the Supreme Court of Justice sentenced former magistrate Gustavo Enrique Malo Fernández to 9 years and 10 months in prison for the crimes of conspiracy to commit a crime, personal bribery and prevaricate by omission for his participation in the Toga poster.

It is a criminal network that sought to direct processes in that high court in exchange for millionaire sums of money.

(You may be interested in: Prosecutor’s Office asked to convict Gustavo Malo for the ‘toga poster’)

Malo Fernández was declared unworthy and charged by the Impeachment Commission of the House of Representatives, act approved in plenary in December 2018, of belonging to a criminal organization in which they were held by lawyers and public servants, to favor graduates in criminal proceedings.

In a 218-page sentence projected by Judge Blanca Nélida Barreto, which had two partial votes, the Special Court of First Instance determined that Malo Fernández indeed, being a magistrate of that high court, joined a criminal group that also they belonged to the lawyer Luis Gustavo Moreno Rivera placeholder image and former magistrate Francisco Javier Ricaurte Gómez, both convicted of this case.

In the opinion of the Special Chamber of First Instance, it was clear that the then magistrate arranged with public officials and individuals to address congressmen -such as former senators. Muse Besaile Fayad and Álvaro Ashton- against those who carried out criminal investigations in the sole instance in his office, in order to adopt decisions contrary to the law and affect the normal course of the same. This, in exchange for bribes and gifts.

Approaches with the gauges were the task of lawyers Luis Gustavo Moreno Rivera and Leonardo Pinilla Gomez, for which Malo Fernández, through Francisco Javier Ricaurte Gómez, former magistrate of the Labor Chamber of the Supreme Court of Justice and former magistrate of the Administrative Chamber of the Superior Council of the Judiciary, provided data to the group to be used when addressing the the aforementioned congressmen.

“The former magistrate Gustavo Malo Fernandez he joined a criminal group and due to the functional privilege he held, he used the information at his disposal so that his co-associates could approach the graduates investigated by his office and with exorbitant financial demands, they reached agreements to torpedo the proceedings “, says the failure.

“The investigations that emerged from such events constitute a sad page in the history of our country,” said the Court, indicating that reaching that high court is not only about complying with the legal requirements, but to have the moral authority and respect to act and serve as a guide in judicial activity.

(You may be interested in: Gustavo Malo’s trial suspended after challenge to magistrates)

“But Malo Fernández ruined when he decided to join an organization that only sought to negotiate with justice in exchange for large sums of money,” adds the Court.

“Colombia as a society has to abandon shortcuts to achieve each purpose, from the base of society to the top of the high state spheres any manifestation of corruption must be put to an end, avoiding at all costs to exercise mechanisms other than those legally established, “the decision maintains.

Colombia has to abandon shortcuts to achieve each purpose, from the base of society to the highest levels of the state, an end must be given to any manifestation of corruption

The first instance decision insists that Malo Fernández did take deliberate and knowingly illegal steps to favor the former congressmen.

In the case of Besaile, the Court did find the removal of the auxiliary magistrate a criminal act. Jose Reyes Rodriguez, who had been carrying out the investigation since 2014 and had everything ready to open a formal investigation and order the capture of the congressman.

According to the Court, Malo, fraudulently, “took the necessary measures within the office under his charge to delay an act inherent to his functions, such as administering justice under constitutional and legal parameters, specifically, he failed to process speedy and efficient proceedings against the former senator Musa Besaile, having the full capacity to fulfill his duty “.

(What’s more: The story behind the unpublished conviction of former magistrate Francisco Ricaurte)

In return, as Besaile himself told justice, he paid 2 billion pesos to delay the opening of a formal investigation for parapolitics.

“To carry out such behavior, Malo Fernández used various maneuvers such as removing the auxiliary magistrate who was carrying out the investigation from office, insisting on compliance with an illicit pact and not as an event that had arisen spontaneously within his office , which, as anticipated, would lead to the investigation against the former senator had to be assigned to a new official who had to invest additional time in getting to know her, with the consequent delay that this would entail for the investigation, a dynamic that was also repeated in
various occasions as a consequence of the rotation that took place in said position, “said the Court.

On the other hand, in the case against Ashton GiraldoAccording to the Court, the criminal network requested 1,200 million pesos to file the preliminary investigation originated in its probable relations with the northern bloc of the self-defense groups, a claim that was mutated by the promise of delaying the formal opening decision, with a view to to prescribe the criminal action, since the file was reassigned, leaving the office of the defendant.

“Away from materializing justice and complying with the teleology that informs the preliminary inquiry and the criminal investigation, the defendant decided to protect private interests
favoring in the two criminal proceedings studied against the two graduates Muse Besaile Fayad and Álvaro Ashton Giraldo, during the time they were in charge, with a clear detriment to the principles of transparency, impartiality and predicable objectivity not only of the public function but, more importantly, of the administration of justice “, says the decision.

(You may be interested in: The six cases behind the historic conviction of Francisco Ricaurte)

The Supreme Court said Malo’s behavior undoubtedly undermined the community’s confidence in the proceedings of the Judicial branch, to the point of questioning and even vilifying jurisdictional decisions through the pejorative marking of the ‘Toga Cartel’, with all the implications that ignorance of the legality of decisions of a judicial nature entails for the preservation of basic values ​​of the Social State of Law before the decrease of the credibility of the judicial institutions giving the sensation of disloyalty, improbity and lack of transparency of their officials “, adds the decision.

The crimes for which he was not convicted

In the Supreme Court of Justice, the trial against the former magistrate of that high court, Gustavo Malo Fernández, began.

The Special Chamber of First Instance declared the cessation of the procedure for the crime of using a matter submitted to secrecy or confidentiality, since the Investigation and Indictment Commission of the House of Representatives carried out such action without complying with the procedural condition demanded by the legislator to mediate a complaint, having been inhibited to proceed due to said behavior as it was inadmissible to initiate the criminal action.

The Court acquitted Malo for the crime of prevaricato per action, considering that the integrating elements of such criminal offense did not meet in what has to do with the request and acceptance of the resignation of a assistant magistrate.

(You may be interested in: Another former judge of the Court, to answer for ‘poster of the toga’)

This is because, even if it is affirmed that such action is formally legal since the nominator has said power, but it becomes illegal due to its motivation, in the crime of prevaricate by action the resolution, the opinion or concept must be manifestly contrary to the law, without in the specific case the illegality of the act being prosecuted has been evident or ostensible.

“The toga, more than an accessory, clothing or garment, is a badge of solemnity, respect and majesty, not of whoever wears it, but of what it represents, which is no different matter than administering justice. Paraphrasing Montesquieu, judging, so terrible among men, must be an invisible power, so that in this way the magistracy is feared, not the magistrates, ”the sentence specified.

The magistrate Ariel torres He partially saved the vote by estimating that former magistrate Gustavo Malo Fernández should have been convicted of the crime of prevaricate by action, since he considered that all its elements were gathered and the gauge was criminally responsible for that conduct.

As Torres explained, the origin of the act of acceptance of the resignation of the then auxiliary magistrate Rodríguez Casas, appears “manifestly illegal, since it is ostensibly contrary to the constitutional and legal norms that provide for the purposes of the State and the norms that regulate the involvement of employees of free appointment and removal “.

(You may be interested in: Gustavo Malo recuses a magistrate who had been offered a job)

“(…) Since, it is insisted, he was provoked with a view to materializing the criminal commitments acquired with the well-known Besaile, not to open a formal investigation and avoid the arrest warrant against him in exchange for a multimillion-dollar sum of money, that is, it was the product of caprice and arbitrariness, did not have legal support, grossly and maliciously ignoring the Constitutional and legal precepts that govern the administration of justice, and protect the right to work, “he said.

On the other hand, the magistrate Jorge Emilio Caldas Vera partially saved the vote since they believed that Malo should have been acquitted of the crime of prevaricate by omission.

For Judge Caldas, since it has been proven that the case against Musa Besaile was, in effect, advanced even after the departure of Auxiliary Judge Rodríguez Casas, Malo cannot be charged with the responsibility of removing him to prevent a opening of investigation.

(You may be interested in: For 10 years, former magistrate refused to return $ 180 million to the State)

“It is worth asking why the auxiliary magistrate did not present Malo Fernández with a project to open an investigation if, in fact, the progress of the process allowed it. What is observed is an omissionate act attributable to Rodríguez Casas that could be wrongly handed over to the defendant here, ”said Caldas, who pointed out that it is possible that Rodríguez was keeping Magistrate Malo in error about the real state of the process.

Caldas said that the delay in the process was due to various situations, such as the change of assistants, but not in the determinations of Malo Fernández.

–Indefinite presidential reelection is contrary to the Convention: I / A Court HR

–Former lawyer of ‘Pedro Orejas’, who is today Attorney General, was acquitted