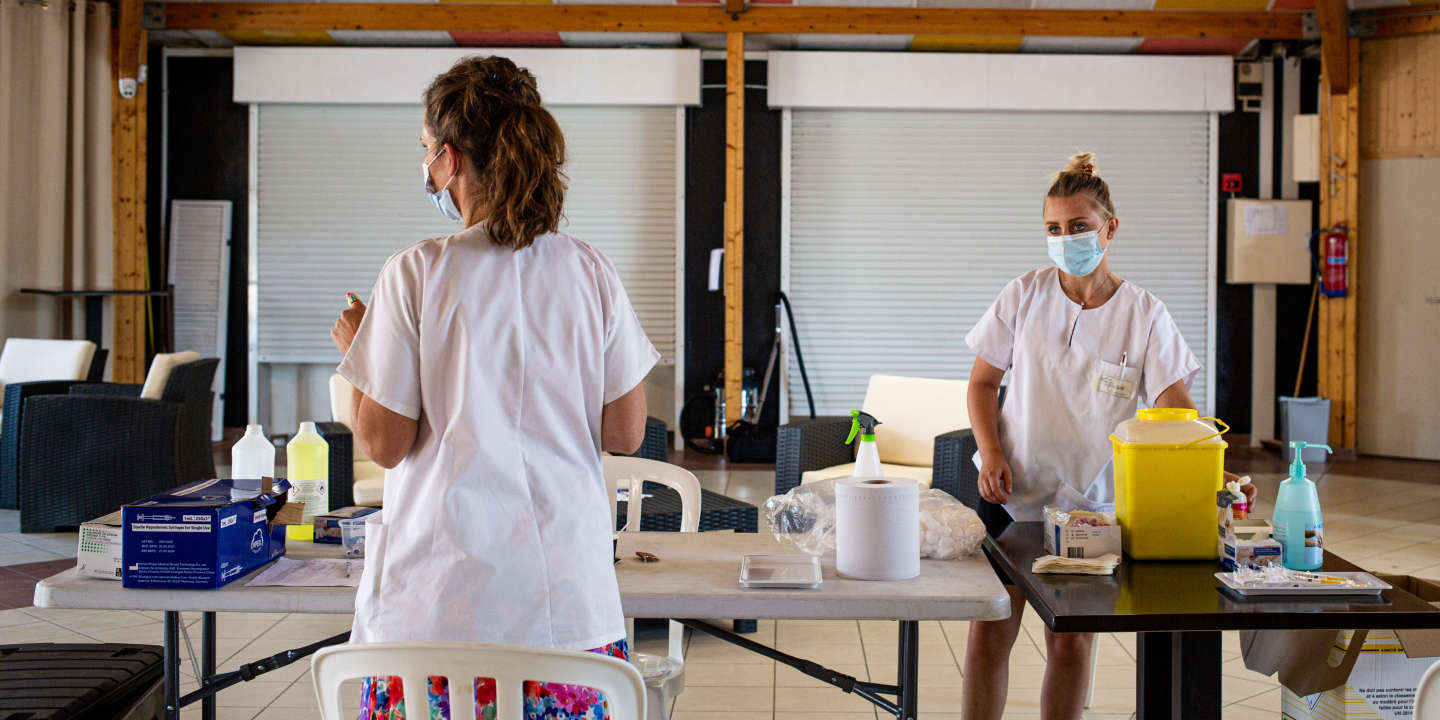 Forty million people in France have received at least one dose of the Covid-19 vaccine, or nearly 60% of the population, Emmanuel Macron announced on Twitter on Monday July 26. “It is together that we will defeat the virus. We continue ! “, encouraged the head of state, which is currently in French Polynesia.

The government, which counts in particular on the reinforcement of the vaccination to try to stem the active circulation of SARS-CoV-2 in France under the effect of the variant Delta, very contagious, had set itself as objective these 40 million before the end of July. It is now targeting the goal of 50 million first-time vaccines by the end of August.

According to the latest official report, 49.3% of the French population (33.2 million people) are now fully vaccinated against Covid-19, i.e. vaccination coverage well below the level required to achieve collective immunity. In an opinion of the scientific council, this proportion is estimated at 95%.

Emmanuel Macron welcomed the fact that 4 million people have been vaccinated in the last fortnight, since the announcement, on July 12, of the extension of the field of the health pass (vaccination or negative test). This document, already mandatory since July 21 in cultural and leisure venues, will become mandatory at the beginning of August in bars and restaurants, as well as in interregional transport and all healthcare establishments, then at the end of August for their employees.

From Polynesia, the Head of State launched a message this weekend ” very strong ” for “Call everyone to be vaccinated” in order to protect themselves and others. He also blasted “Irresponsibility” and “Selfishness” of those who refuse to be vaccinated, after new demonstrations by opponents on Saturday.

Read also: Good use of freedom in times of health crisis

According to key figures communicated on Sunday by Public Health France, the health situation remains generally stable despite the sharp increase in cases of contamination for about two weeks (16,167 new cases on Sunday). The authorities are counting on vaccination to prevent this increase from affecting hospitals. More than 6,800 Covid-19 patients were hospitalized on Sunday, including 886 in critical care services.

The Constitutional Council will render its decision on August 5 on the law relating to the management of the health crisis, which provides in particular for the extension of the health pass and which was adopted definitively on Sunday evening by Parliament. The text should enter into force from the beginning of August, in accordance with the initial will of the executive.

With this bill, the health pass must be extended to cafes, restaurants, fairs and trade shows, as well as to planes, trains, long-distance coaches, to medical establishments except in emergencies as well as, finally, to shopping centers upon decision of the prefects. The bill also makes compulsory the vaccination of staff in hospitals, clinics, Ehpad (accommodation establishments for dependent elderly people) and retirement homes, firefighters, certain soldiers, as well as for professionals and volunteers working with people. elderly, including at home.

Article reserved for our subscribers Read also Health pass: what is contained in the bill definitively adopted by Parliament

In addition, people tested positive for the coronavirus must be placed in isolation for a non-renewable period of ten days in the place of accommodation they determine. Isolation may end earlier if the test is negative.

SUD-Rail called the railway workers on Monday to “Do not carry out checks on sanitary passes”, which will become necessary from August to travel on TGV, Intercity trains and international trains from France. The union asks SNCF agents to only carry out “Their only security and ticket control missions”, he said in a statement.

Point : Health pass: where will it be required from July 21? What tests will be accepted? The questions posed by its extension

Regarding SNCF employees (controllers, rail security officers) who will need a health pass to be able to work on board these long-distance trains from August 30, SUD-Rail warns that it “Will not hesitate to call for a strike on the whole” of the group, “If the State and the management of the SNCF came to confirm their intentions to sanction” employees without a pass “By suspension or reclassification” to a position that does not require this pass.

If he is for “General vaccination on a global scale” – the “Best way to stop the pandemic” –, SUD-Rail “Refuses constraint and infringement of freedoms” and “Positions itself against the sanitary pass”, let him judge « antisocial » and “Discriminatory”. This health pass “Is built against workers, especially those” who worked “Without any protection during the first wave and who this time will be the first to be punished”, believes the union.

Our selection of articles on the health pass