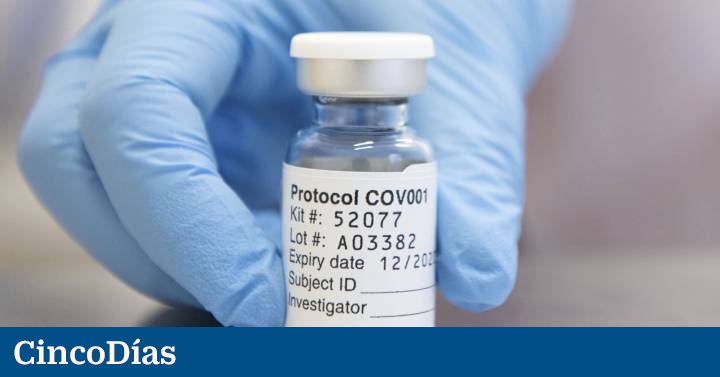 AstraZeneca on Monday became the third laboratory, after Pfizer / BioNTech and Moderna, to advance data on the efficacy of its anti-Covid vaccine. But his explanations have only created uncertainty in the scientific community and among investors. What undoubtedly seemed like excellent news to end the pandemic that has left nearly 1.4 million dead and an unprecedented economic crisis, has only raised questions about its approval. Without going any further, this week, the company’s share was left 6% on the London Stock Exchange.

This Friday the Government of Boris Johnson gave important support to the British company by asking the UK drug agency to authorize the emergency use of this vaccine. This support comes at a time when the company, which is developing the product together with the University of Oxford, has yet to clarify the way forward to receive the approval of the EU and the US.

The origin of the AstraZeneca problem comes from the presentation of preliminary results of the phase III clinical trial, the last stage before requesting authorization from the authorities and which is carried out with thousands of volunteers. The company surprised by giving efficacy results in two different subgroups of participants. The conventional dosing regimen of two full injections (on 8,895 volunteers), whose administration was separated by a month, showed an efficacy of only 62%. Much lower than those previously reported by Pfizer (95%) and Moderna (94.5), both based on messenger RNA.

But the company came down with data from a hitherto unknown study with a smaller sample (2,741 participants), which has an efficacy of 90% if half a dose is administered, followed by a complete one with an interval of one month. . The laboratories decided to average the two trials and reported an average efficiency of 70% in their press release.

Within a few hours, Menelas Pangalos, vice president of the company, acknowledged that the second study was a fortunate mistake. Some of the volunteers in the UK were given a first dose of half the antigen by mistake. When they found out, they got the go-ahead from the health authorities and continued this second study. Participants were injected with a second full dose per month. As a result, the company obtained the surprising fact that with less compound, it obtained better efficiency.

For the scientific community it does not make sense that with less doses a better result is obtained. This would mean a serious fact for the company: that the original test was poorly designed. Or simply that the data from the most effective study is more inconsistent because it comes from a smaller subgroup.

Uncertainty about the authorization process

Under normal conditions, this error would not have been a problem, because it would have been expected to have more data on both tests to solve unknowns. However, in this fast-paced race for a medical solution to the pandemic, AstraZeneca’s path creates enormous uncertainty.

The laboratory has not clarified with any precision whether it will decide to bring to the European Medicines Agency (EMA) the data with the original study (with less efficacy in the provisional figures) or those of the smaller sample. The dilemma is not negligible. Advocate for a less effective vaccine, or perhaps have to wait longer to collect additional data from more people on the less antigen protocol.

With enormous impudence, the laboratory went so far as to say in the press release that, based on the results of the study carried out by mistake, by requiring fewer doses, it could reach a larger population.

“Subgroup analyzes in randomized controlled trials are always fraught with difficulties,” he says. Paul Hunter, Professor of Medicine at the University of East Anglia of Great Britain, picks up Reuters. “To have faith in the results, any subgroup analysis must have a large number of volunteers,” he added.

Europe doesn’t have the data

The EMA indicated in October that it has begun what it calls an ongoing evaluation of the data coming in from the AstraZeneca study to give the necessary authorization for the company to begin distribution. Initially, it was expected that the request to the EMA would arrive with enough time for the supply to the countries to arrive in December. Although it is likely to be delayed until January.

So far, the community drug agency has not received data from either of the two subgroups in which AstraZeneca has tested the vaccine.

“The EMA has evaluated the first batch of data on the vaccine, which comes from laboratory studies (non-clinical data). The agency is awaiting the second batch of data that should include data on the quality of the vaccine, including its ingredients and the how it is produced, and the company’s responses to the questions that arose from the first batch of non-clinical data “, sources from the European health authority acknowledge to this newspaper.

A study without older people

In its presentation, AstraZeneca did not report that the trial with the most promising results did not include older people, those most commonly affected by severe cases of Covid-19. Moncef SlaouiSenior Scientific Advisor to the US government’s Operation Warp Speed ​​vaccine program highlights gaps in the trial data. It advances that in the subgroup that received half the initial dose, there was no one over 55, suggesting that the efficacy of the regimen in crucial older age groups is not proven in these interim data. “There are a number of variables that we must understand and what has been the role of each one of them to achieve the difference in effectiveness,” he says.

The company announced on Monday that, with this preliminary data, it will immediately prepare the presentation of the evidence to the authorities to seek advance approval. But given the uncertainties created, it seems that first they will have to clear up some unknowns. The company assured that the data they have will be published in a scientific and peer-reviewed journal. But, at the moment, there is only one press release of an unfinished essay.

“The efficacy percentages offered by all these companies will change when the studies are completed and a rigorous statistical analysis of their trials is done,” he recalls. Mercedes Jiménez Sarmiento, researcher at the CSIC’s Center for Biological Research. “What we have so far is the data that companies have given on efficacy, but they have said nothing or very little about the symptoms, side effects or whether it stops the transmission of the virus. There are more factors than efficacy to approve a vaccine, “he adds. “At the moment you have to be cautious.” This scientist adds that, for now, it makes no sense that a lower dose works better.

The CEO of AstreZeneca, Pascal Soriot, He had to go out to clear up some unknowns this Thursday in statements to Bloomberg. “Now that we’ve found what looks like better efficacy, we have to validate it, so we need to do an additional study,” Soriot acknowledged. The manager also announced that in order to obtain authorization in the United States, he will have to carry out these additional studies, but did not say anything about the European case.

Advantages and weight in the EU

There is additional pressure on the AstraZeneca injection to be successful because it is easier to store and the company sells it at cost during the pandemic, at a price of 2.9 euros, which means that many low- and middle-income countries depend on it. For the EU, it is also its main supplier among the most advanced vaccines in terms of deadlines, since it has acquired 300 million packages, expandable to another 100 million, so the success of the product is key for the 27.

In fact, a recent report by Deutsche Bank indicated that if the company failed to confirm the highest efficacy, European countries could reach group immunity in the third quarter of 2021, several months after the more dependent US does. from Pfizer and Moderna.

The British product has clear advantages in its distribution, since it is kept in a simple refrigerator between 2º and 8º, compared to the freezing needs of the Pfizer vaccine (75º below zero) and Moderna (20º below zero if stored more 30 days).