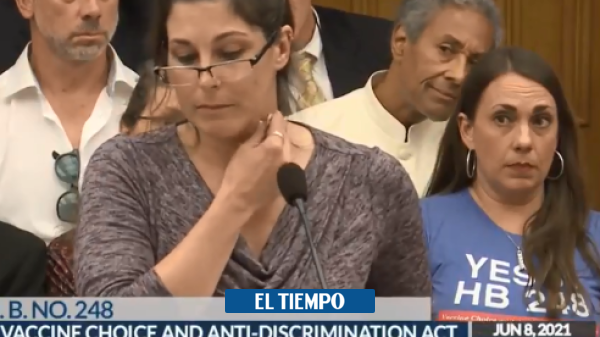 During the sessions in the Ohio House of Representatives, where a Law that seeks to weaken vaccination against the covid-19 Based on conspiracy theories without any scientific basis, a nurse tried to demonstrate the supposed ‘magnetism’ generated by vaccines against covid-19 trying to stick a key around his neck, to teach his crazy thesis, making a fool of himself, because the metal never adhered to his skin.

The debate of said Law, the 248th House in Ohio, which is supported by at least 18 representatives of the Republican party, has been plagued with a variety of theories and ‘arguments’ out of all reality and scientific probability, typical of the news most popular false statements that have circulated on the internet about covid-19 vaccines.

(You may be interested in: Ten common lies about vaccines circulating on the internet and chat)

This nurse, whose name did not come out, first ‘stuck’ the key to her chest. Then, he tried to adhere it by ‘magnetism’ to his neck, which he did not succeed. He even tried to stick a hair clip, which also falls off naturally, to the astonished gaze and some laughter from the crowd.

Wow. An anti-vaccine nurse in Ohio tried to prove the Vaccines Cause Magnetism theory in an state legislative committee. The demonstration did not go to plan pic.twitter.com/0ubELst4E8

Other ‘arguments’ that have been heard, according to the newspaper Ohio Capital Journal, they speak of supposed ingredients of vaccines as ‘fetal cells’, which a pastor of the city exposed, another of the common lies and myths on this subject.

Sherri TenpennyCleveland physician, not only exposed other lies associated with “horrible side effects” but also focused on the ‘magnetism’ that vaccinated people supposedly acquire, as well as the relationship “between 5G towers and vaccines”, another great lie, widely denied by health authorities, that circulates on the internet about vaccines.

If this Law is passed, in Ohio it would be prohibited for companies, nursing homes, universities, colleges, entities, etc., to encourage, encourage, their employees, students or clients to be vaccinated against the covid-19.

–Chile announces that Santiago will return to confinement

–These are the prioritized comorbidities in stage III vaccination

–Covid: The EU joins in investigating the origin of the pandemic