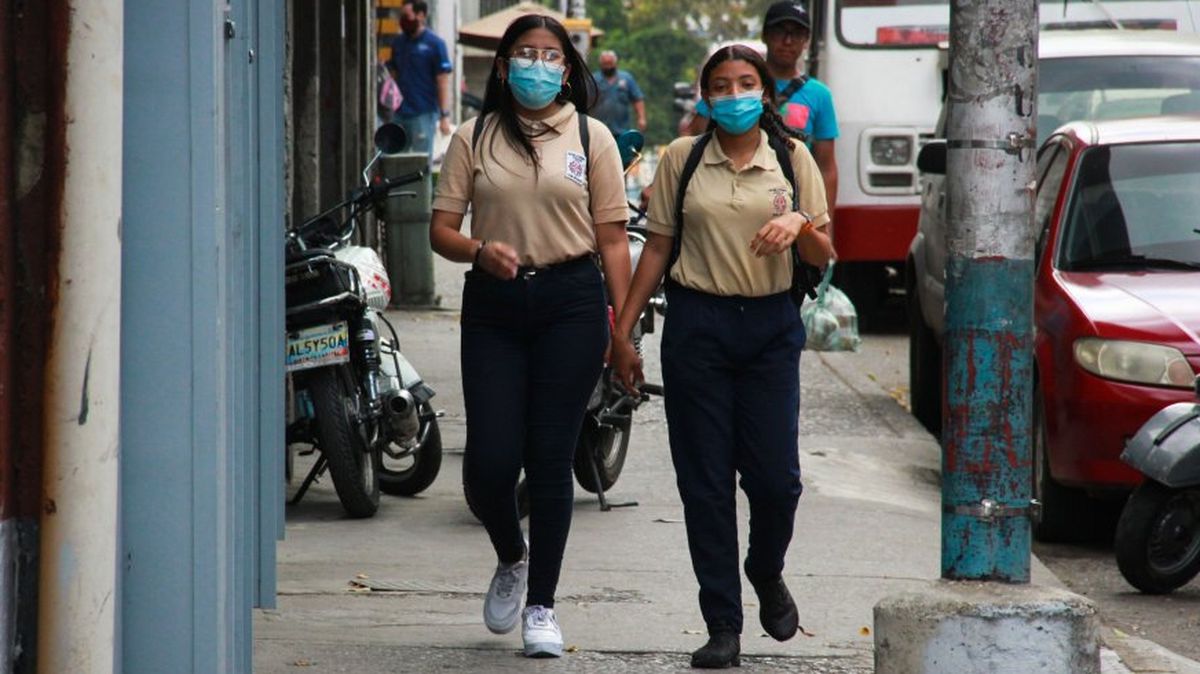 This week, for the first time since March 2020, some private schools in Venezuela they organized the return to face-to-face classes of their students. It will be an initial experiment that will be repeated three times a week and with mandatory biosecurity measures. The Government of Nicolás Maduro has announced that from October the return to face-to-face classes in all educational centers will be progressive, in principle under the scheme of a flexible quarantine week, in which school will be attended, and another of strict quarantine, with classes in line.

The return to face-to-face classes in Venezuela is a decision that had already been announced, but which was postponed due to the increase in infections. During these 15 months, since the outbreak of the pandemic, students have only received classes online while the authorities imposed severe restrictions on movement. The Government organized the plan Each family a school for distance education, which has been widely criticized for its quality. Now the return is expected to be real. “Go preparing the students, classroom by classroom, section by section, high school by high school, university by university, with great firmness and seriousness with biosafety measures,” Nicolás Maduro has asked in an official televised act.

The vice president, Delcy Rodríguez, assured that 80% of the country’s teachers “are already fully vaccinated” to receive students under the mixed scheme. Encouraged by modest numbers of infections and deaths from covid, Maduro has even declared his interest in decreeing, for the first time, the months of November and December free of quarantine, with the aim of stimulating the economic movement to some extent.

The government’s intention to return to face-to-face classes has drawn criticism due to the difficulty of carrying out the plan in some public education centers, which comprises 80% of education in Venezuela. “I do not think it is a question of refusing a call to face-to-face classes, but you have to see how the realities are in popular schools, in rural areas, the working conditions, the deficiencies of the current moment,” says Nancy Hernández, leader of the NGO Fenasopadres, linked to teaching and education.

The increase in covid cases in the capital and the structural problems of Venezuelan education at this time – salary lags in teachers, teachers’ diaspora, school dropouts and service problems in the schools themselves – are, according to what Hernández relates, some of the most serious obstacles. important to return to normal.

Franklin Piccone, an active teacher in several secondary schools and a union leader, explains that “there is likely to be a blended educational process, with serious problems in the quality of teaching and lags in learning.” “Venezuelan teachers are in a situation of technical unemployment: salaries are starving (eight dollars a month). Connectivity problems, student dropouts and the diaspora have aggravated the problem of education, ”he says.

“From the psycho-emotional point of view, going back to class is a necessity for students, especially for primary school students”, concedes Samuel Pérez, sociologist and professor at the Central University of Venezuela, who adds: “You cannot have face-to-face classes without the majority of teachers and students being vaccinated. We also have a serious problem in the guild. The financial problems of the teachers complicate the return to classes ”. Educator Leonardo Carvajal also believes that returning to face-to-face classes is a “laudable goal”. “The conditions for teaching in a distance education. I have had to give a lot in the quantity and frequency of my demands on the students, “he says.

Lila Vega, pediatrician and active member of the NGO Red de Madres, Padres y Representantes, assures that “the return to classes cannot be postponed, but it has to attend to some conditions. It has to be safe, that it respects all the protocols; it has to be flexible, because an increase in infections can bring us back home, and finally, it has to be voluntary: there are still parents afraid of sending their children to school and we have to respect that ”.

Professor Carvajal predicts a return to classes “with ups and downs, disorganized and chaotic.” “No one can be against the idea of ​​going back to the classroom. The issue is to evaluate under what conditions that return will take place. I allow myself to doubt the statements that Delcy Rodríguez makes about the number of vaccinated teachers ”, he abounds.