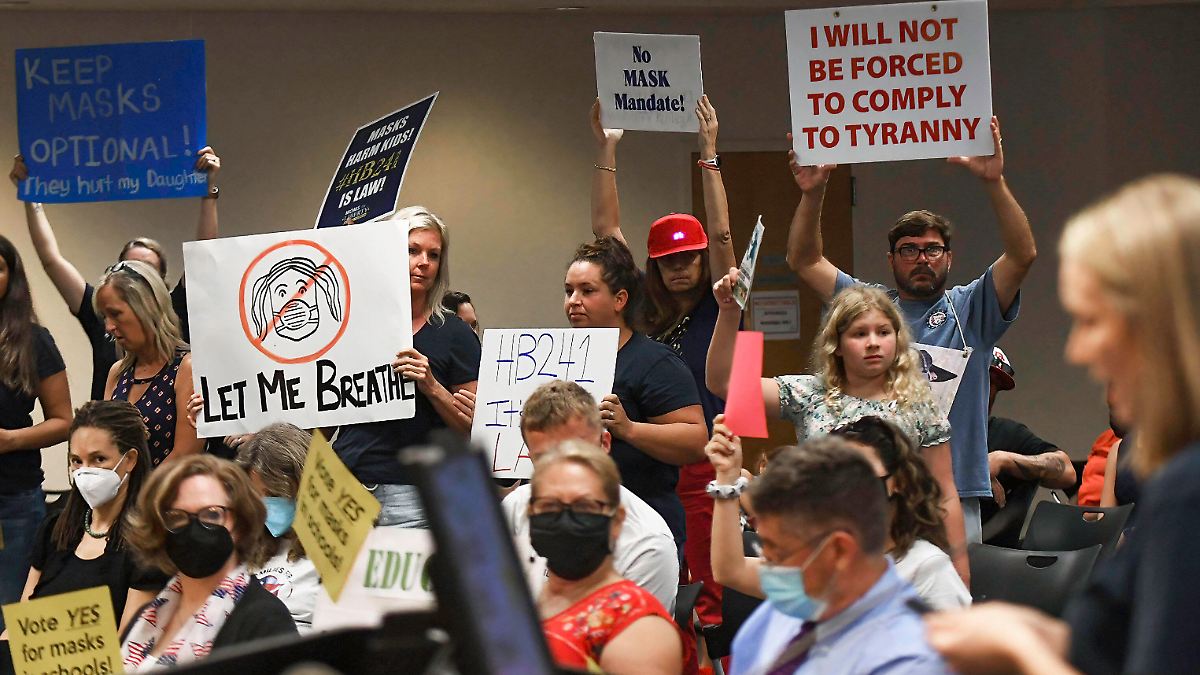 Covid “war” in the sunshine state

Florida counts more deaths every day than ever

By Roland Peters and Christoph Wolf

The fourth wave of pandemics in the United States is driving up the death toll. Donald Trump’s second home, Florida, will be hit particularly hard. This also has to do with the governor DeSantis there. The Republican is traded as a presidential candidate.

Joe Biden took up his presidency in January with one promise above all: he would systematically fight the pandemic with vaccinations and quickly defeat it. This seemed to be successful by the beginning of July. But since then the United States has been riding a gigantic fourth wave. The daily death toll has multiplied since the beginning of August. The delta variant has infected more people than it has done since January, when the deadliest wave of pandemics to date flattened out. The same goes for hospital admissions.

The southeastern US is particularly affected. “Every day I feel like I’m going to war,” said a Florida nurse, “It’s like a battlefield.” Every day in the USA around 100,000 people are admitted to hospital because of serious Covid diseases – if they can afford it. The ten particularly badly affected states are almost all in the south of the country. In Florida it was last around 11,000.

A popular online video entitled “Florida is Vietnam” blames local governor Ron DeSantis for all the dead – and also accuses the Republican of systematically lying to the population, similar to the politicians of the time. His state is driving up its death rate in the USA, almost 20 percent of Covid victims die in Florida. Since mid-August there have been more daily than ever before, most recently the number was 362. In states with the highest death rates, a below-average number of people are vaccinated. Florida is an exception, it is about the national average.

All of these could indicate that people in Florida are less protective than anywhere else in the United States. Because the vaccination protection depends on who is exposed to a particular risk after an infection. There are numbers from June, when 99 percent of the dead were not vaccinated. That shouldn’t have changed much. In addition, those states are particularly affected, where a particularly large proportion of the people voted for Republicans in the past presidential elections. There the proportion of the vaccinated population is usually lower. However, a clear connection between voting behavior and the death rate cannot be proven on the basis of the available data from the constituencies.

So far, 54 percent of the US population is fully vaccinated. The pace has dropped sharply from more than 3 million a day to under 1 million since the peak in April. Roughly speaking, there are far more adults vaccinated in the northeastern states than in the south. In Mississippi, for example, only 42 percent of the population is currently fully immunized, one of the lowest proportions in the country. The death rate per 100,000 inhabitants was also 1.42, the second highest in the country. Socio-economic factors, i.e. the income level, apparently play a role.

Why Florida? The fact that the state is considered a refuge for Trump supporters and influential personalities close to him may play a role. The ex-president himself moved from New York to the “Sunshine State” after his election defeat, as he advertises. In the last election, the Republicans in the sunny state did surprisingly well. Governor DeSantis has long been exploiting the doubts that Trump has sown since the beginning of the pandemic for his own agenda.

The Republican recently overturned mandatory mouth and nose protection in schools, despite the contrary recommendation of the CDC anti-epidemic center. Ten school districts in the state are resisting, which is why DeSantis wants to sanction them with fines and other requirements. Biden’s government shows its solidarity and wants to give the affected school districts a helping hand so that they can maintain the mask requirement despite fines. DeSantis is taking legal action against the masks.

Half of all Florida students live in the affected areas. Since last year they have found themselves in a proxy conflict in the political competition between President Biden and DeSantis. The governor reopened the schools early in 2020 and thus passed court in the end. It was a victory for the Republicans. Because of his fighting spirit and political steadfastness, the governor is considered a possible challenger in the 2024 presidential election. The 43-year-old Republican has risen to be the most promising candidate for a candidacy for ex-President Donald Trump. While the primaries are still years away, it shows how the pandemic can fuel political careers. “Keep Florida Free” is DeSantis’ campaign slogan for next year’s gubernatorial election.

Not only politicians like DeSantis, but also Biden’s government apparently has a role in the worsening pandemic. In July, the Delta variant of the virus had long since arrived in the United States, but the CDC held back on recommendations for countermeasures. When the CDC finally recommended that fully vaccinated people wear mouth and nose protection in closed rooms, the intensive care units were already overcrowded in many places. There was already data from Great Britain and Israel on portability and the great dangers for communities with low vaccination rates.

Biden’s government wanted to carry out the investigations from abroad in the USA itself, writes “Politico” in an analysis to the fourth wave. But the US health system is federal; the states are usually responsible themselves. The delay was therefore also due to the flow of data: The CDC relies on the surveys of the federal states for its information. In order to detect a delta infection, laboratories also have to examine the tests more elaborately. At least 20 states told “Politico” that they were therefore unable to trace the infection routes of the virus variant.

The result of all of this is the current situation in the United States. The delta variant, a sluggish vaccination rate, political unwillingness and a little failure of his own: That is why Biden cannot fulfill his inaugural promise to fight pandemic as quickly as he would like it to be. And that’s also due to Florida and the Republicans’ political hope there – Ron DeSantis.