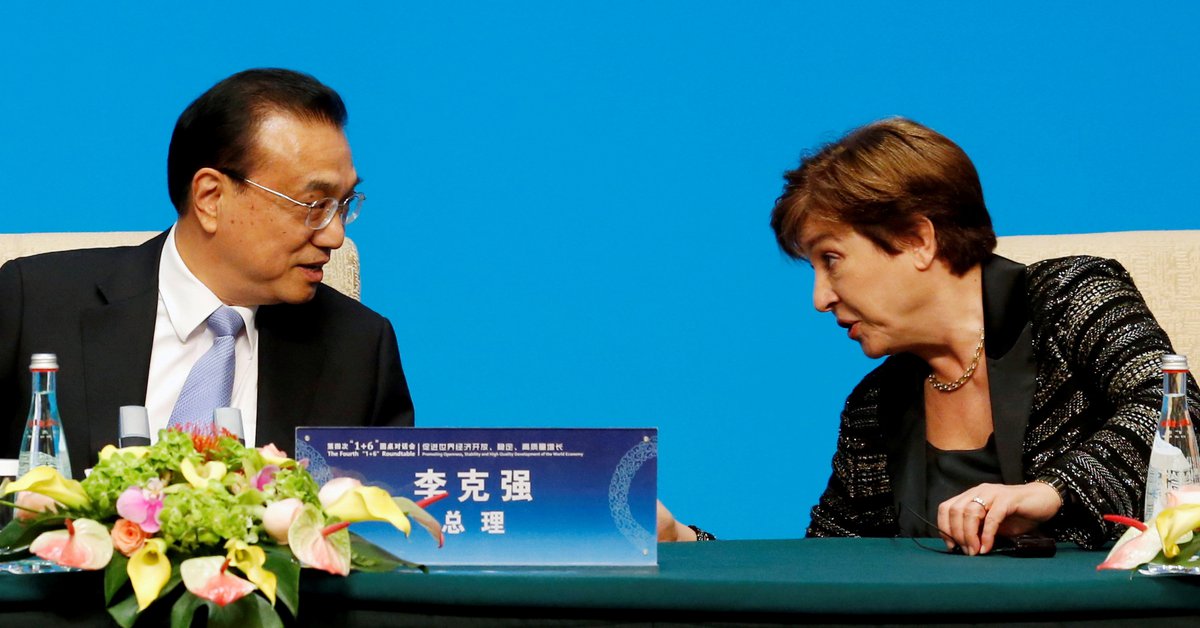 Georgieva at an event with Li Kequiang, the Chinese prime minister, who according to an audit complained to the World Bank about China’s position in the “Doing Business” report. According to the audit, Georgieva bowed to that pressure and manipulated the report REUTERS / Florence Lo / File Photo

Criticism and pressure on the managing director of the International Monetary Fund, Kristalina Georgieva, for her role in manipulating data from a World Bank report, when she was number two in that body, continue to increase.

The Economist, one of the most important publications in international economic and diplomatic circles, He has already openly asked for his resignation, and in its edition this Saturday the no less influential newspaper Financial Times returns to the subject, after publishing an editorial yesterday in which it regrets that the World Bank has decided to discontinue the publication of the annual report “Doing Business” because of the episode. in which Georgieva intervened. In today’s note, the FT recapitulates the issue and highlights the discomfort and questions that the situation provokes in the staff of the Monetary Fund, whom Georgieva seeks to appease, in addition to needing to overcome any objection that may arise from the Board of Directors and the Committee. of Ethics of the organization to which he arrived a little less than two years ago.

Georgieva is accused of having put pressure on World Bank staff to assign better grades and better position of China in the ranking of competitiveness and business climate that was published in 2018 and that produced the removal of the entity from its then chief economist, the Nobel Prize in Economics Paul Romer, who was questioning the integrity of Georgieva.

As pointed out by a former member of the Board of the FundEven if Georgieva overcomes this crisis, her margin of laxity will be greatly reduced to eventually push politically for agreements with governments whose programs are less than satisfactory according to the technical evaluation of the institution’s orthodox staff. Such could well be the case of Argentina, with which the organization has been maintaining a long and even inconclusive exchange of information and opinions. On the other side, also the Minister of Economy, Martín Guzmán, arrives weakened by the criticism and Kirchnerist pressure to what should be the final stage of the negotiation.

Georgieva and Guzmán, in one of their friendly encounters, in this case in Italy, during a meeting of G20 finance ministers

In today’s note, the FT reports on Georgieva’s strong rejection of the accusation of having been part of a quid-pro-quo, a sort of exchange of favors from the Bank with China so that the Asian power, the third most important contributor, be less reluctant to reinforce the capital of the institution, which in return was more benevolent in the preparation of the “Doing Business” and looked for ways to raise its position, from position 85 to 78 in the ranking. That exchange, concluded a private audit hired by the current Bank authorities in the face of different complaints received, was fundamentally in charge of the Bulgarian Georgieva and her compatriot Simeon Djankov (name of a Bulgarian patriarch of the 10th century), who is no longer an official of the Bank.

I did not go

“Amid growing calls for him to resign,” says the British newspaper, Georgieva vehemently denies the allegations. Let me be clear; the accusations are wrong; I did not pressure anyone to alter any report, “said the head of the Fund in a statement yesterday. His words came out while the Fund’s Board of Directors weighs the arguments, accusations and testimonies contained in the report of the Wilmer Hale Study, which prepared the accusatory audit after an investigation of several months and in which it interviewed dozens of officials and former officials of the World Bank.

The editorial of the latest issue of The Economist, asking for Georgieva’s head

According to the Financial Times, Wilmer Hale’s report had a strong impact on multilateral financial entities based in Washington. Georgieva said she will explain the matter “soon” to the IMF board members, who have yet to reach any conclusions. However, the FT highlights, None of the governments of the Fund’s partner countries, including the US, has said if they trust Georgieva’s ability to continue in her current role.

The scandal, says the British newspaper, stains both the IMF and the World Bank, shortly after both institutions have their Annual Assembly, in mid-October. “Data integrity is something central to our institutions and it has guided my career as a public servant and I would never be a party to any alteration of data for political purposes,” Georgieva said in her statement, in which she also stated that in a world facing urgent and complex challenges, “from Covid to inclusive growth, from climate change to racial and gender equality, our work at the IMF has never been more vital.”

In turn, the official acknowledged that the allegations against her and her initial silence since the publication of Wilmer Hale’s report, caused discomfort among the Fund’s staff. “I have strived to be open and inclusive and I am very sorry to hear that some of the staff felt that their concerns were not heard,” said Georgieva. Going forward, she promised, “I will make sure that I am even more responsive and responsive to staff views and that there are accessible channels for colleagues to express their views.”

The question now is whether those words will suffice.

Public works: which are the provinces that win and lose in the distribution of funds from the 2022 Budget
“Putting money in your pocket”: what is the impact of the economic measures in the run-up to the elections
Financial week: portfolio dollarization was activated and the exchange gap approached 100 percent
The fiscal controversy: how much should the Government spend for Martín Guzmán to comply with Cristina Kirchner’s request