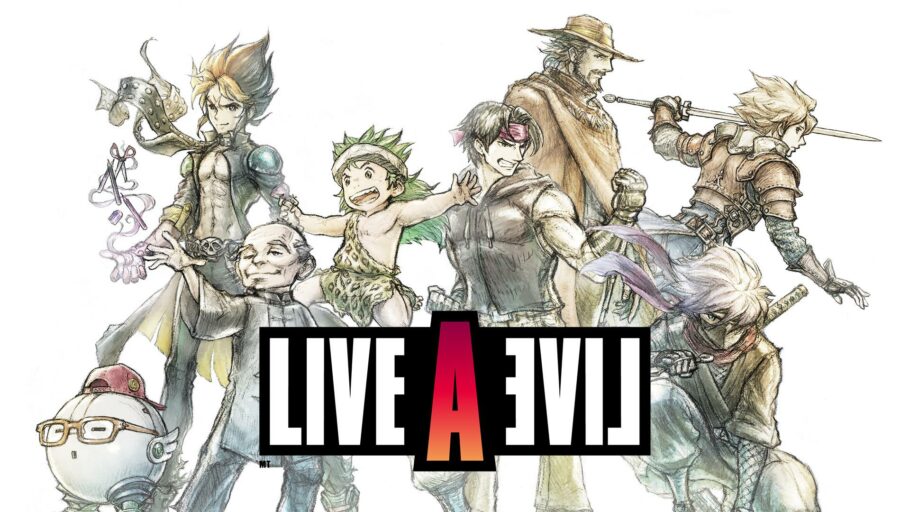 What can I say except “finally! »? Live A Live, the cult role-playing game, is finally available in an official western version. Also, this is not just a port of the 1994 Super Famicom / Super NES / Super Nintendo game. Square Enix did it right and decided to make a remake of it using its HD-2D engine as Octopath Traveler or Triangle Strategy. But has this 16-bit role-playing game kept its luster or has it aged badly?

The crazy and ambitious bet of Live A Live

From its first version published in 1994 in Japan, Live A Live was ambitious and it must be said, a slightly crazy gamble by Square. The Japanese studio, in the wake of its various Final Fantasy successes in mind, had decided to offer Super Famicom players not one story but 7! Indeed, from the start the game offers us to choose from seven characters who each represent a different era:

Each chapter therefore allows you to live a different adventure, in a different era with different characters and enemies. Only the combat system, which we will come back to below, is identical.

We owe this brilliant concept to Takashi Tokita, the scriptwriter of Final Fantasy IV and Chrono Trigger, sorry. The music is provided by the no less brilliant Yoko Shimomura who has a CV as long as her arm: Street Fighter II (Guile’s theme is her), Parasite Eve, Legend of Mana, Kingdom Hearts, Final Fantasy XV. The project was already a collaboration between Squaresoft and manga publisher Shogakukan Inc.

But, unlike Octopath Traveler which used the same concept, the characters of Live a Live end up all meeting to face a common threat much like the Avengers from Marvel Cinematic Universe. It is therefore through two additional chapters that the heroes unite to defeat evil.

Tactical and strategic combat for Live A Live

The genius of Live A Live also comes from its gameplay and more particularly from its combat system which would have its place in a Tactical-RPG. Indeed, although the fights are random as in a Final Fantasy or Dragon Quest, the placement of the characters is essential as in Final Fantasy Tactics or Fire Emblem.

The Square Enix title offers a particular turn-based with squares on which allies and enemies are placed. Of course who says squares says displacements but also attacks of zone. Each special attack is learned by leveling up. The latter are of different kinds and can have a variable effect (attack, healing, elemental attack and even an attack that leaves trapped areas on the board). You will have to use them wisely to hope to overcome your opponents, some of whom can occupy several squares at the same time, which can be very practical.

A high-flying achievement in Live A Live

If the original game offered the traditional pixel art of the 16-bit era, the remake available now on Nintendo Switch uses the HD-2D engine developed by Square Enix using the Unreal Engine. It mixes 2D sprites with 3D elements. It can be seen in action in Octopath Traveler and Triangle Strategy. And we should see it in the future in Front Mission Remake as well as Dragon Quest III Remake.

The lighting effects are still just as successful and the various 3D elements in the decor fit perfectly into the whole. The result is exceptional and still impresses as much without distorting the original game. A real work of craftsmanship from Team Asano (the Square Enix team in charge of HD-2D projects) and Historia (an external development studio).

On the sound side, we are also spoiled since Yoko Shimomura is back with arrangements and other re-orchestrations of the game’s iconic themes for a new soundtrack as always. punchy. In addition, Live A Live benefits from full dubbing in English or Japanese as well as a rather good French translation.

If you want to get a feel for the game and its gameplay mechanics, there’s a downloadable demo available from Nintendo eShop on Nintendo Switch. In addition, save data from the free demo is transferable to the full game. Ideal to know what to expect with this particularity that is Live A Live. If it was out of place in 1994, it was part of a vast library of excellently crafted JRPGs and risks taken by Square. But it clashes even more today knowing that the risks, especially for companies like Square Enix Co which no longer have much to do with their version of yesteryear, are now very calculated.

After Live A Live Remake, we are now waiting for Front Mission 1st Remake which was supposed to be released this summer but of which we have no further news. It must be said that the development has been entrusted to an external and non-Japanese company since it is Forever Entertainment (Panzer Dragoon Remake) which is in charge. They are also responsible for Front Mission 2 Remake.

Switzerland: Among the air traffic controllers, recruits are desired