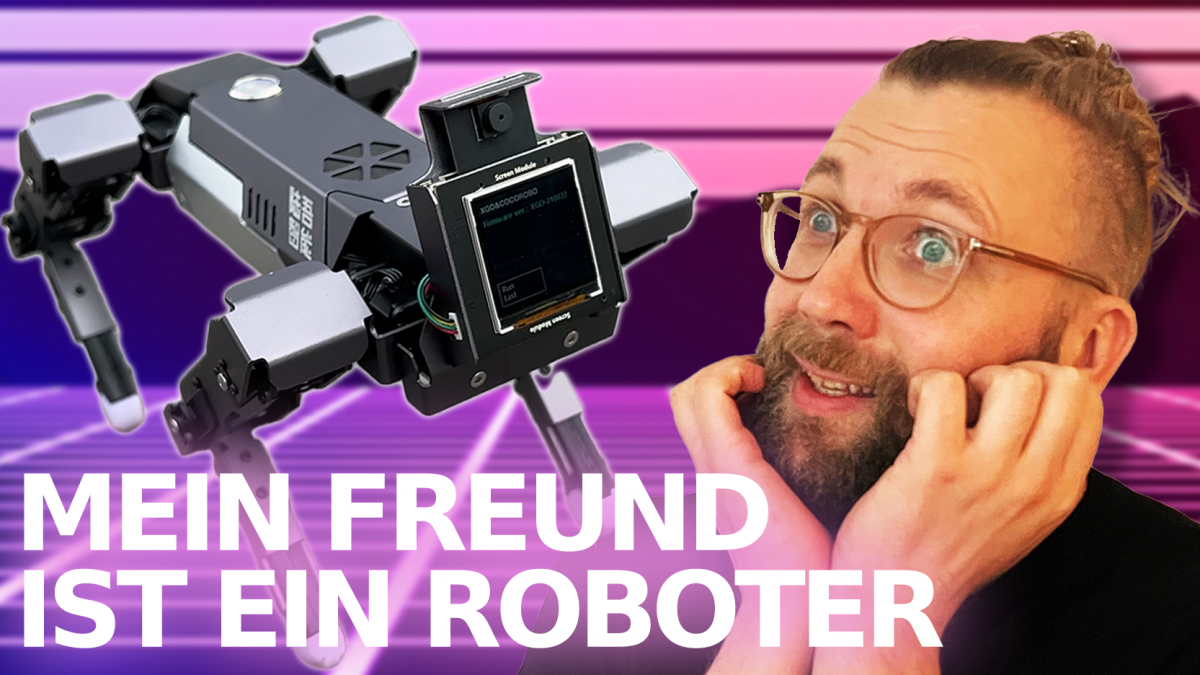 Transcript of the video:

Alright folks, I’ve seriously bought myself a robot dog. The XGO Mini comes from the small startup Luwu Dynamics from China; I paid 550 euros for it. The XGO Mini is surprisingly easy to program, masters many interesting movement sequences and can do many things better than the biological variant – but not many things either. Stay tuned!

Ever since I saw the movie ‘Number 5 Lives’ as a little kid, I’ve wanted a robot friend; other, much worse-tempered machine creatures couldn’t change that. And somehow, as a kid, I thought that when I grow up, surely everyone will have their personal robots. Well, it’s 2022 now, and ok, a lot of homes actually have robots, but while these vacuum cleaner things are pretty cool, they’re definitely not what I imagined as a kid.

The products from Boston Dynamics are among the few real robots that really amazed me from time to time. But even though the company made a lot of very playful videos, these things weren’t made to please people – but rather for the opposite, for example in the military. Most Boston Dynamics products never got beyond prototype status, only the robot dog Spot has been available for purchase as a normal product since 2020: for around an easy 70,000 euros. He is mainly used to explore potentially dangerous environments with his cameras, such as the residential building complex that was in danger of collapsing after the fire in Essen.

The “robot dog” concept certainly seemed to have struck a chord, because last year the Chinese manufacturer Xiaomi launched the Cyberdog, a much smaller and lighter version: instead of 32 kilograms like Spot, the Cyberdog weighs only 3 kilograms and is also expensive only around 1300 euros. Unfortunately, only 1000 were made – and they sold out immediately, so it seemed more like a Xiaomi promo marketing campaign.

So and now finally to my XGO Mini. At 700 grams, it’s significantly more delicate than Xioami’s Cyberdog, and also a lot cheaper: I paid 550 euros including shipping. But I only got this comparatively low price because I supported the project at Kickstarter early on. The part now costs 800 US dollars, so about 700 euros. The developer and manufacturer of the XGO Mini is the five-person startup Luwu Dynamics from China – you can tell from the name where the Luwu people got their inspiration – but why not.

The XGO Mini really makes a very robust impression: It is made entirely of aluminum and looks almost a bit cyberpunk-like due to its industrial look. I like it, but you can also clearly see that this is not a consumer product for everyday use: Nothing is encapsulated here, some circuit boards are exposed, water and dirt are definitely not good for the XGO Mini. Also, the robot dog’s body is dangerously sharp-edged; I don’t want my finger between any of his joints. He has 12 of them, three on each leg and a servo motor in each joint.

A 2500 mAh hour battery serves as the energy supply, which was enough for 86 minutes of continuous movement in my tests. The only sensor system installed is an IMU, i.e. an inertial measuring unit consisting of a gyroscope and an acceleration sensor. There is no obstacle detection with ultrasound or infrared. But a computer module specialized in image recognition. This part was not developed by Luwu Dynamics, but this is a finished module, namely a Kendryte K210.

Short nerd insert: The thing doesn’t calculate with ARM or X86 instruction set architecture like all other technical devices, but with RISC-V, which is an open source standard, so everyone can build such RISC-V processors. The computer module in the robotic dog only has a power consumption of 300 milliwatts. Unlike devices with Android, for example, the XGO Mini or the AI ​​module starts in just three seconds – by the way, this is the on/off button. Otherwise there are only three more buttons to operate; these are miniature SMD push buttons on the circuit board here; you have to know that they exist, otherwise you probably wouldn’t find them.

After switching on, you can then use it to navigate through a menu: the two buttons at the top control up and down, and the button below confirms the selection. 21 demo programs are pre-installed, all of which are stored as Python scripts on the supplied MicroSD card. First of all there is, for example, “Dog Move”, here the XGO Mini does all sorts of dog moves and a somewhat strange anime face appears on the display. Other demo scripts recognize objects and human faces and then perform actions – for example, I can use this to teach the Mini to paw when it recognizes me.

However, the whole thing is not really suitable for everyday use: For example, you have to be very close to the camera with your face for it to work. The camera records with a resolution of 2 megapixels, the built-in LC display only shows 240 x 240 pixels. But what’s really great: You don’t necessarily have to know Python to program the XGO Mini, you can also use XGO-Blockly, a graphic block-based programming language licensed by CocoRobo.

Ok, that’s all still a bit fiddly – after starting the Windows software, for example, I first had to find the Chinese symbol for “change language” – but then it’s quite good. Incidentally, you don’t always have to write each script manually to the MicroSD, but you can also simply connect the robot dog to the computer via MicroUSB and then start the scripts directly.

But you shouldn’t expect a highly polished user experience here: you can clearly see that it all comes from a small team and that the English-language documentation isn’t the priority either – for example, the texts on the screenshots are always in Mandarin, huh then a bit confused. But even I, who didn’t study robotic rocket science, somehow managed to do it. And it’s definitely fun to program a robot dog.

If you don’t want to have the XGO Mini run any scripts, you can simply control it with a smartphone: The control app is available for Android and iOS and works amazingly well – the connection with Bluetooth always worked super reliably and quickly in my tests, what I really can’t say of all Bluetooth devices. In the app, you can make the XGO Mini run forwards and sideways, turn it on the spot and even adjust the height, i.e. how deep it “crouches” when standing. In addition, 19 movement sequences can be run – which is definitely very cool if you want to use the robot dog as an actor in a video, for example. And he’s athletic too (squat, squat, squat!). I think it’s a bit of a shame that the display only ever shows the nice switch-on text message in remote control mode – it would be nicer if there were a face on the display.

The Mini runs best on flat, hard ground. He doesn’t make good progress on deep carpets or in the grass, or in the worst case he even falls over – then you have to help him to get back on his feet – he can’t do it without external help. Interesting detail: When I was playing around with the XGO Mini outside, people walking by didn’t really care. But as soon as I put a dog leash around it for the video – quite a few people stopped and found it all really exciting. Strange right?

So, my verdict on the XGO Mini. As you can probably tell, I had a lot of fun with the robotic puppy. But would I have paid 550 euros for it as a private person? And would I use it regularly? Probably not, which is why I’ll pass it on to my c’t colleague Pina after the test, who wants to get more involved with programming the AI ​​module.

If you have a specific project in mind that has to do with face or object recognition, for example, and that ideally runs on a machine that can move – then the XGO Mini is right for you. Otherwise, I can only think of a few areas of application: It could perhaps serve as an eye-catcher on a trade fair stand; but does the short battery life get in the way? All in all, I still think the XGO Mini is an impressive project, you get a lot of future technology for comparatively little money. But my dream of having my personal robot friend who hangs out with me every day – the XGO Mini hasn’t fulfilled that yet. Oh no, don’t be sad, I don’t mean that personally!

c’t 3003 is c’t’s YouTube channel. The videos on c’t 3003 are independent content and independent of the articles in c’t magazin. Editor Jan-Keno Janssen and video producers Johannes Börnsen and Şahin Erengil publish a video every week.

With Trump Away, Joe Biden Vows to Bring the Truth Back to the White House

Suspicious maneuvers with Nutresa shares on the Colombian Stock Exchange