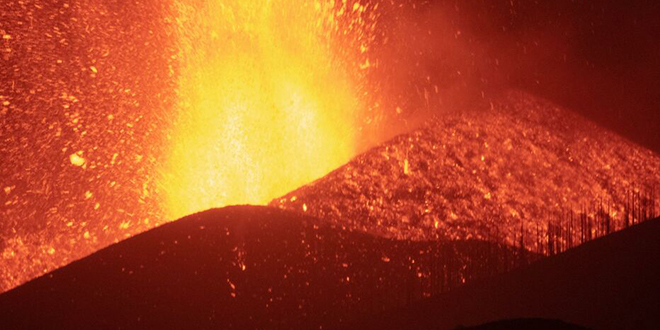 Lava from the Cumbre Vieja volcano, which erupted on September 19 on the Canary Island of La Palma, reached the ocean overnight from Tuesday to Wednesday, the Canary Islands Volcanological Institute (Involcan) announced.

“The lava flow has reached the sea at Playa Nueva,” Involcan said on his Twitter account. The lava was, Tuesday afternoon, about 800 meters from the sea, but its speed was accelerated to reach the ocean a few hours later. This encounter between molten lava and water was particularly feared due to the production of poisonous gas and harmful particles that it could entail, which makes it potentially dangerous.

For this reason, the regional government of the archipelago had decreed an “exclusion radius of 2 nautical miles” around the place where the arrival of the lava was expected. The authorities of the Canary Islands ordered, on Monday, the containment of several neighborhoods due to fears of the emanation of toxic gases that could cause the arrival in the sea of ​​the lava expelled by the volcano.

On Tuesday, the Spanish government adopted the first emergency aid plan for victims of the volcanic eruption on the island of La Palma estimated at 10.5 million euros. The aid will be used, in particular, to buy homes for people who have seen their homes engulfed in lava, according to the government of Pedro Sanchez.