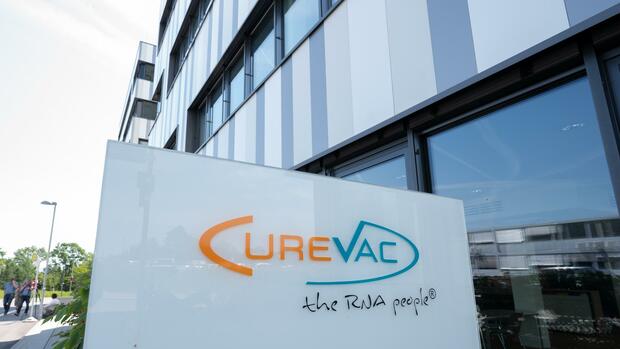 Frankfurt A good three months after the submission of weak test results for its Covid vaccine, Tübingen-based Curevac is facing a difficult realignment. The company announced on Tuesday that it would withdraw its mRNA-based vaccine candidate “CVnCoV” from the ongoing approval process at the European Medicines Agency (Ema).

Instead, Curevac wants to concentrate its resources more on an improved successor product and its alliance with the British pharmaceutical giant Glaxo-Smithkline (GSK). Both the advance delivery contract with the EU and the partnership with Bayer for the distribution of the vaccine are no longer valid.

The biotech company is also turning around in terms of technology: It is true that they want to continue working on vaccines based on unmodified mRNA. At the same time, work on vaccines made from modified RNA will be accelerated together with GSK. Curevac and GSK are turning to the mRNA technology on which the successful Covid vaccines from Biontech / Pfizer and Moderna are based.

By the end of the year, “a broad clinical program” with second-generation vaccine candidates is to start with the aim of developing a new Covid vaccine ready for the market in 2022. The knowledge gained from working with CVnCoV and the infrastructures built will continue to be used.

The aim is, in close cooperation with GSK, to bundle its own resources “for the advanced vaccines of the second generation”, explained company boss Franz-Werner Haas. GSK will also use additional resources and experts within the framework of the alliance.

Last year, the Tübingen-based company was still considered one of the greatest hopes in the fight against the corona pandemic. In addition to the main shareholder Dietmar Hopp, the state-owned Kreditanstalt für Wiederaufbau also has a share of around 16 percent. But with the final end for the primary Covid vaccine candidate, Curevac is now falling back to the status of a biotech company in the early phase of product development.

Only two clinical projects remain in phase 1 research, a vaccine candidate against rabies and a potential cancer drug, the future of which also appears questionable. In addition, the portfolio only includes preclinical projects, i.e. product candidates that have not yet been tested on people.

The pharmaceutical companies Boehringer Ingelheim and Eli Lilly, who worked together with Curevac in the field of oncology, withdrew from collaborations with the biotech company this year and last.

Alliance with GSK is becoming more and more important

The partnership with the British pharmaceutical giant GSK will thus become a decisive factor for the further development of Curevac. The two companies formed a strategic alliance in 2020 that initially focused primarily on vaccines and therapies against other infectious diseases and excluded Covid vaccines.

At the beginning of the year, they expanded the cooperation to include the joint development of an improved Covid vaccine based on an optimized mRNA formulation. According to Curevac, this generated significantly higher antibody concentrations in animal experiments.

The primary vaccine candidate CVnCoV, on the other hand, showed an effectiveness of only 48 percent in a large clinical study – and thus a significantly lower degree of effectiveness than the competing products from Biontech and Moderna, which reduced the risk of infection by around 95 percent in comparable studies.

In response to the weak data, the Curevac share has already depreciated significantly in recent months. On Tuesday morning, it was quoted at 37 euros, around 70 percent below its high at the end of last year, but still well above the issue price of around 13.60 euros when it went public in summer 2020.

While many experts had long since doubted approval in view of the disappointing data, Curevac had so far stuck to the goal and continued to rely on the ongoing rolling approval process at Ema.

Company boss Franz-Werner Haas justifies the decision to withdraw with a changed EMA schedule for the approval process. The authority had signaled that a decision could not be made until the middle of next year at the earliest. At this point in time, the medical need for such a vaccine is much lower. At the same time, the plan is to have next-generation candidates in advanced clinical trials by then. Under no circumstances should you withdraw from the approval process because you don’t believe in the product.

With this step, Curevac is following the example of the French pharmaceutical company Sanofi, which also gave up an mRNA vaccine candidate a few weeks ago. Sanofi also considered the time and medical delay compared to the established vaccines to be too great.

Despite the failure with CVnCoV, the Curevac management continues to be optimistic and combative. “With the first product, our entire technology platform did not fail, it was validated,” says company boss Haas. “We learned a lot with the Covid project, also in terms of clinical studies and production expansion. But together with our partner we will do everything we can to advance the technology faster. “

Your own path has failed

Curevac and GSK operate in a challenging competitive environment that can hardly be understood without a closer look at the technologies. MRNA is a complicated chain molecule that is composed of similar building blocks, so-called nucleotides, to the DNA that carries the genetic material. The key challenge in using synthetic mRNA as a drug or vaccine is that it is usually destroyed by the immune system before it can take effect.

To avoid this effect, Moderna and Biontech use an mRNA variant for their vaccines in which one of the building blocks is slightly chemically modified – a process that was originally discovered by researchers at the University of Pennsylvania.

Curevac and GSK, on ​​the other hand, have so far relied exclusively on natural, chemically unmodified mRNA and their optimization through the special arrangement of the more than 4000 individual components in the vaccine.

With their swing in the direction of modified mRNA, they are breaking new ground in that they have only limited experience in this regard. Unlike their competitors Biontech and Moderna, they have not yet acquired any usage licenses from Pennsylvania University, which holds key patents in the field. Another challenge is likely to be to set up meaningful clinical studies for new Covid vaccines in an environment in which a high proportion of the population is already vaccinated and the competitors Biontech and Moderna are already starting with “booster” vaccinations.

The new head of development at Curevac, Klaus Edvardsen, does not want the move in the direction of modified mRNA to be understood as a complete departure from the previous research strategy, but rather as an extension and addition. “It looks like modified RNA is the better solution in the Covid area. But there are likely to be areas where the use of unmodified mRNA is more advantageous, for example in cancer therapy. I therefore see great potential for the platform. The mRNA technology is only just beginning. “

Curevac still has a lot of money in its pocket

Edvardsen, who most recently headed the development of oncology drugs at Merck, switched to Curevac at the beginning of August and is supposed to help professionalize product development there.

The Tübingen-based company still has considerable financial leeway. At the middle of the year, Curevac had cash reserves of more than 1.3 billion euros. They come from, among other things, a lavish capital increase at the beginning of the year as well as from the IPO and a large private financing round last year.

In addition to GSK and a group of investors around the Qatar Investment Authority (QIA), the federally owned KfW also contributed 300 million euros to this financing round with a total volume of 560 million euros. It holds almost 30 million shares and has paid around ten euros per share for them.

Curevac continues to be one of the best financed German biotech companies. However, cash consumption has also risen sharply recently. In the first half of the year, the biotech company is likely to have consumed a good 370 million euros in capital. With the completion of the phase 3 study, however, the company expects the cash requirement to decrease noticeably again.