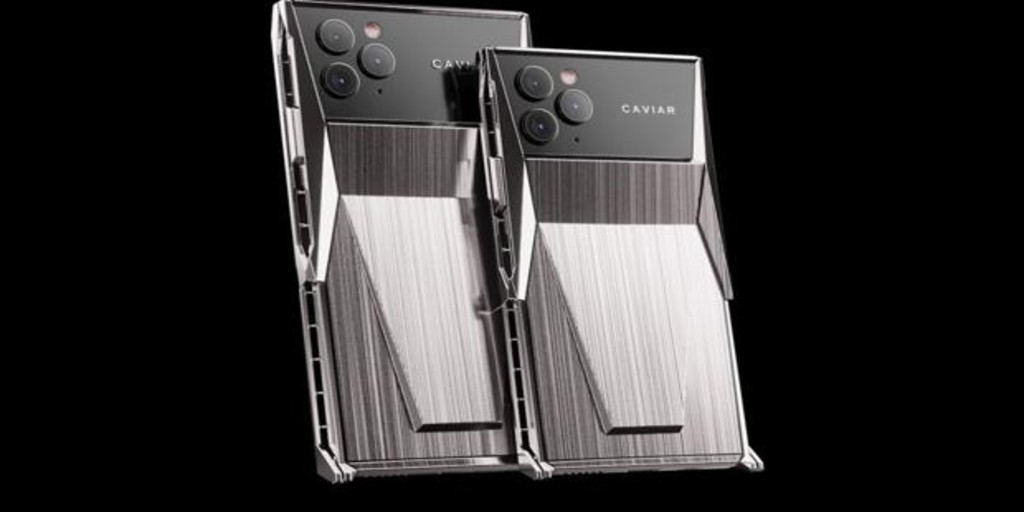 The “Cyberphone” combines the two technological challenges of the year: Cybertruck, the controversial motorhome of Tesla Motors and iPhone 11, the triple camera smartphone that competes with the performance of a reflex.

The screen becomes support – © Caviar
This device as eclectic as extravagant is the new bet of Caviar, the ideological Russian brand of the world’s most expensive Airpods and iPhone Caviar, the most expensive in the world among other unusual gadgets whose mission is to render excellence in the technological sector covering the devices pointers of materials such as silver, platinum, gold in all types and precious stones are its star coverage.

This time they are not looking for opulence as much as breaking the design schemes and the delusional proposal chosen is the Cyberphone. Its folding front cover is inspired by the Tesla truck platform and its screen protector is also similar.

Caviar sure that the total protection of the body not only isolates, but also improves the functionality of the smartphone: if the user would like to use their favorite applications or make video calls the folding titanium screen protection becomes a much more comfortable support.

The Russian company defends the efficiency and resistance of its new devices – © Caviar
The phone is a real iPhone 11 and on it he poured the ideas he drank from the Tesla project: they share the same angled architecture cut into black and marked lines. Its most interesting feature is the metal plate that covers the screen of the Cyberphone and folds behind the headset to become its base.

It is necessary to contact the house to get one of these smartphones, yes, it is an exclusive gadget: its production is limited
99 units

The head brand of Vladimir Putin
One of his most opulent creations: an iPhone with a smartwatch installed – © Caviar
Caviar, the quintessential brand of Russian President Vladimir Putin, wants to grow in value, so it goes beyond ostentation and bets on design and the intangible.

iPhone pro 11 gold and dimantes (29,000 euros) – © Caviar
He showed it last year, when he launched designs with “history fragments”: he incorporated small fragments of Russian memorable spaceships, Sel Titanic, memorable fighting boxing gloves and even a small square of a black turtleneck sweater worn by the co-founder Apple Steve Jobs.

The Russian company intervenes copies of companies such as Nokia, Samsung or Apple and covers them with gold -of all types that exist in jewelry-, platinum (white duke of metals) or titanium (a practical, versatile and low-weight material ).

The base is usually a precious metal on which precious stones (diamonds, rubies, sapphires and emeralds among others) are embedded. To beautify the specimens, it executes complicated engraving and relief techniques that shape three-dimensional shapes and drawings

Among the most special creations of the company is the iPhone x Caviar, the most expensive in the world, the expression of sovereign luxury par excellence, which combines an XS max model with an Apple Watch that goes directly embedded -if the customer wishes- on the back of the phone. All in one piece.

See Also:  Markieff & Marcus Morris not yet in Orlando?

This “Frankenstein” model that combines smartphone and smartwatch are pure ostentation: the Apple Watch is gold and its “high-tech” load with 633 precious stones. The piece is worth 40,000 euros.

The Gold Pro Airpods of 61,570 euros – © Caviar
On the other hand, the jewel mobile, an iPhone XS Max has the same features as the original Apple model, including its large 6.5-inch QLED screen, but its case prints a globe made of gold and decorated with precious stones, It costs 21,500 euros. The piece can be purchased together or separately, embedded or loose and it is a limited edition of 100 copies.

Caviar mobilizes to reach agreements with several high-tech houses while adapting to the needs of the most distinguished society. The following example demonstrates this: for a few months now, the Lower House of the Russian Parliament passed a law that prohibits the country’s military from using smartphones and tablets to guarantee security, privacy and control in its operations and to counteract the information leak that could be used by enemy forces.

A few weeks after this measure became effective, Caviar already had a simple, practical, luxurious, interesting and adapted device adapted to the new law. The Russian military can now buy this luxury phone without a camera or recorder. The model is limited to making calls, receiving them and shining. .