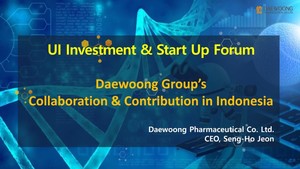 Daewoong Pharmaceutical (CEO Jeon Seung-ho and Lee Chang-jae) participated in the ‘UI Investment & Start Up Forum’, an investment forum held at the National University of Indonesia (UI) on the 14th in real time, Indonesia’s business and future plans were introduced, and the current status and plans of industry-university-linked open innovation to be promoted with excellent universities and talents were shared.

About 300 people including government officials such as the Indonesian Ministry of Health and Welfare and the head of the Investment Coordination Agency, major academic figures such as the UI president, investors, and local media attended this forum. was composed In addition, there was also an opportunity to promote mutual cooperation by sharing the business and investment strategies of major Indonesian pharmaceutical companies and investment companies.

In the announcement, CEO Jeon Seung-ho announced Daewoong Pharmaceutical’s global expansion plan for open innovation, with Indonesia as a base country in Southeast Asia. The plan to strengthen cooperation was emphasized. Participants also showed a lot of interest through a number of questions and answers.

Daewoong Pharmaceutical has set open innovation as a future core strategy for a long time and has been building a new cooperative model through investment in innovative startups and shared growth. Fields of particular attention are DDS formulation technology, cell and gene therapy, next-generation stem cell platform, neurotoxin, and artificial intelligence (AI).

In addition, Daewoong Pharmaceutical and UI are maintaining a close cooperative relationship by conducting a global scholarship program and a credit-linked global master’s/doctoral training program, etc.

Professor Arry Yanuar, dean of UI College of Pharmacy, who prepared this event, said, “Through cooperation with Daewoong Pharmaceutical and UI, especially the College of Pharmacy, we are planning more active activities in social contribution and industry-university connection fields as well as research fields.” We look forward to cooperation with Daewoong Pharmaceutical and the Indonesian government for the development of R&D fields such as the establishment of a new formulation laboratory for UI and a clinical laboratory project.”

The new Barstool Sportsbook will be available soon

Why the change of position of Spain on the Sahara