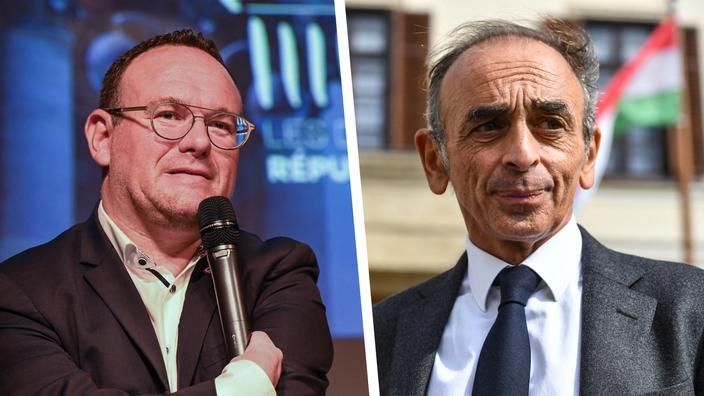 The president of the LR group in the National Assembly wants to show the “insurmountable dike” which separates his political family from the polemicist.

It is said that Eric Zemmour would have “convictions shared with the republican right», But Damien Abad does not agree. In a press release, the president of the Les Républicains group in the National Assembly wanted to be decided. If the polemicist has indeed convergences with the right, then the deputy invites him to “to confront it by debating together“. The elected representative of Ain even formalized his proposal in an official letter.

The “digue” is “impassable“, Also assured Damien Abad, believing that”France has nothing to do with Pétainism or the extreme right». «The French are entitled to an informed debate to understand what differentiates Eric Zemmour’s republican right. My parliamentary group has been making proposals for almost 5 years. I am ready to defend them», He declared again.

Guest on Europe 1 this Wednesday morning, Gérard Larcher also insisted on the fact that the polemicist does not share “not the same values ​​of the RepublicThan the right. President LR of the Senate even assured him that he was indeed a candidate “far right». «The one who refuses to live the difference and the diversity».

SEE ALSO – Gérard Larcher: “Eric Zemmour is the candidate of the far right”

«I personally have said it for a long timeHe slipped, like a clarification that seemed necessary. Last Sunday, the leader of the party, Christian Jacob, assured that “non“Eric Zemmour is neither racist nor far right. Before specifying on social networks that the writer “does not have the same lineAnd that he is not allowed to participate in the congress of the right. At the beginning of September, Eric Ciotti, in the running for the congress, had for his part announced thatin the event of a second round between Emmanuel Macron and the writer, his vote would go to the latter.

Above all, Gérard Larcher castigated the Gaullist heritage to which Eric Zemmour claims. “I, who got involved very young (…), did so for an open France, a radiant France. Not a curled up France, not a scared France. A France that also affirms values“, did he declare.

Read alsoPresidential 2022: a poll gives Zemmour neck and neck with Bertrand, in a handkerchief with Le Pen

Before quoting a few points of divergence, as on the vision of Europe, concerning “Pétain and French and foreign Jews», «this kind of confusion” on “Islam and Islamism” or “towards women». «Listening to him sometimes on the positioning of women in politics, I have the impression of hearing Radio Kaboul“The Republican rebuked.