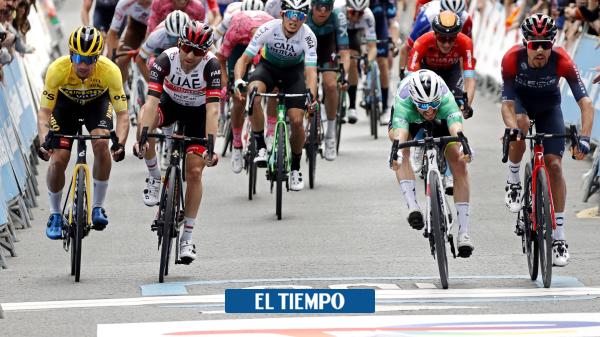 Carlos Rodríguez won the fifth stage of the Tour of the Basque Country, in which Remco Evenepoel is the new leader and Colombian Daniel Martínez rose to second place overall.

This Friday’s fraction was carried out between Zamudio and Mallabia, 163 kilometers long, with several mountain passes and an arrival with a demanding ramp in which some differences were marked.

It may interest you: (Daniel Martínez: why is he the most ‘profitable’ cyclist at Ineos?)

On the day, the retirement of Colombian Sergio Higuita, who did not look good in the Basque Country, after winning the Tour of Catalonia.

Higuita got out of the test and will continue preparing for the Ardennes classics, one of the goals of the Bora rider.

Due to the narrow differences in the general classification, the teams interested in fighting for the title of the competition were very attentive and sent men to the front, sometimes looking for an attack and others to control.

Marc Soler (UAE Emirates) and Carlos Rodríguez (Ineos) were the most important cyclists who jumped out of the group and came to disturb Roglic’s leadership. The Spaniard was the most dangerous, since in the general classification he was one minute eight seconds behind first place.

And with 15 kilometers to go, it was Remco Evenepoel who jumped out of the group and took Martínez, Alekandr Vlasov, Enric Mas and Pello Bilbao, but Roglic did not go with them. Only from the Jumbo Visma was Jonas Vingegaard, who was seventh, 19 seconds behind his leader.

The difference increased more and more, while forward Rodríguez released Soler. The race became emotional, since the difference between the Martinez lot and the Slovenian lot was 30 seconds.

In the Colombian group they rotated, but Vingegaard did not collaborate, normal, Well, Roglic was coming back in a group in which only the Groupama cyclists helped him.

The final part, the ramp of up to 16 percent, favored Rodríguez, who won the day, and at that point, since the difference between Martínez’s group and Roglic’s group was one minute.

Evenepoel is the new leader and Martínez, second. This Saturday, last stage, of 138 km, with a high finish, first category mountain prize, two kilometers from the finish line.

It may interest you: (‘A strong bitch’: they point to Conmebol for the mascot of the Copa América Femenina)

Death of Fujiko A. Fujio, famous manga author and co-creator of “Doraemon”