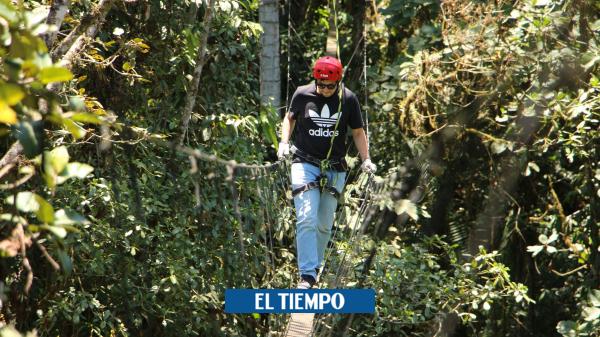 My son died. I only know that I was on the other side of the rope and he never came, ”said the father of José Alejandro Cárdenas Romero, the nine-year-old boy who died last weekend in the municipality of La MesaCundinamarca.

According to the local mayor, Humberto Segura Barragán, everything happened on Sunday at about 4:05 in the afternoon in the Canaán eco-park, located in the Trinidad village of the San Joaquín inspection.

A family from Bogotá had arrived there and had decided to return to the place to spend a few days off. In fact, they were staying in some cabins. They enjoyed all the adventure attractions.

(You may be interested: Niño jumped from a tarabita in La Mesa in Cundinamarca and died)

I screamed, I called for help, an ambulance,
but nobody helped me quickly. The workers were unprepared. The boy got entangled in the rope. I only heard the screams

One of these is a canopy from where visitors launch to see the nature of the place and as a way to burn adrenaline.

It is known that a good part of the family jumped without mishap, but José Alejandro never reached the other side of the rope by which people are transported by a pulley. In the absence of him, the family and the employees of the place begin to search anxiously and access the point where could be seen suspended halfway through the lifelinewhich is where the instructors go when there are problems.

When they arrived they saw the child entangled and as they could they lowered him from the heights. They say that they took him to the municipal hospital, but there was little they could do because the boy had already died.

According to Segura, members of the Technical Criminal Investigation Corps (CTI) of the Prosecutor’s Office were the ones who carried out the removal of the body and assumed the investigation.

One of the hypotheses is that the minor died by hanging. But It will be the result of the autopsy that will reveal the cause of death. For now, the interviews with the owners of the place, the instructors, with the family and with the rest of the witnesses of the event are being carried out.

Faced with this tragedy, the municipal administration proceeded with the sealing of the place. According to the mayor’s office, when all the documents were requested, there were missing documents. “We were there at around 7 at night, and when they were asked for permits and the national tourism registry, they were not up to date with the issue of firefighters,” said Segura.
For this reason they were notified of a summons and the ecopark was sealed for 10 days.

“We are subject to the other verifications of other documents and additional permits that the park must have,” said the mayor of the municipality, who pointed out that no other irregularity was found.

The Prosecutor’s Office will determine if it was a human or mechanical error. “I cannot imagine the pain of the boy’s family. We are very dismayed,” added Segura.

But the boy’s father, Edwin Cárdenas, says he didn’t know his son was going to launch himself. “Also, They told us that there was no danger, that everyone did that, from the smallest to the largest.. He left with my mom and my sister and my other daughter. I stayed downstairs waiting for him to arrive. He launched, but he didn’t get there,” she said.

He added that there was not adequate care to attend to an emergency like the one that occurred mid-flight. “There was not a doctor, a nurse, a paramedic. They do not knew what to do”.

Edwin doesn’t get out of the confusion, he only knows that when he saw his son again he was suspended. “I screamed, I asked for help, an ambulance, but nobody helped me quickly. The workers were unprepared. The boy got entangled in the rope. I only heard the cries for help.”

The minor’s family made the complaint because they do not want other people to experience the same tragedy and that the attractions have all the security measures. “We live a tragedy. I just want it to be investigated and the truth of what happened is known “. EL TIEMPO tried to communicate with the phones of the ecopark, but there was no answer.

Child with leg amputated after shark attack in Florida