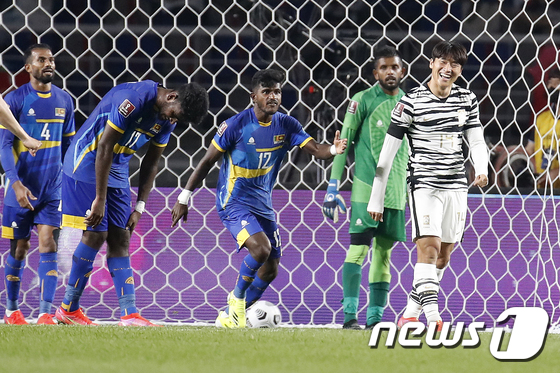 Sangbin Sang-bin, a rookie born in 2002, who scored his debut goal in the A Match debut, said, “The next goal is the World Cup.”

Jung Sang-bin made a perfect debut by scoring a goal in the 32nd minute after being replaced in the 27th minute of the second half.

In an interview after the match, Jeong Sang-bin said, “I am grateful to coach Bento and the coaching staff who made me play the game. My fellow hyungs also helped me a lot. Thanks to that, I was able to score my debut goal without being nervous.”

It was an honor to be selected for the national team right away at a young age, but it must have been a burden.

Jeong Sang-bin replied, “It would be a lie if I said there was no sense of weight. At first, I felt pressure, but after helping my hyungs and others around me, I had a lot of fun later.”

Fans who visited the Goyang Sports Complex on this day expressed their expectations with a lot of applause from the moment Jung Sang-bin was replaced.

Jung Sang-bin recalled, “I heard applause, but I was concentrating on the game, so it wasn’t too loud.” He recalled, “I only had the thought that I had to work hard to help the team.”

After that, Jung Sang-bin said about the scoring scene and the content of the game, “When the cross came up, it rushed over and it passed over my head. Then, (Lee) Dong-kyung-hyung’s shot luckily came in front of me and set my foot with the thought of just letting it go.” The coach told us to take the opposing defense and then aim for the back, so we focused on doing what he ordered.”

Jeong Sang-bin, who has already scored his debut goal at an age difficult to even make his A-match debut.