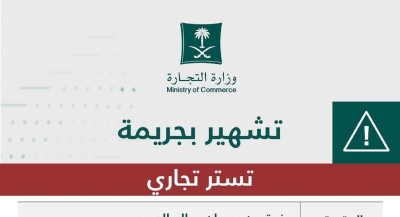 Al-Marsad newspaper: The Ministry of Commerce defamed a Saudi citizen and a Palestinian resident after a court ruling was issued convicting them of committing the crime of covering up the activity of blacksmithing and aluminum workshops in the city of Riyadh.

The ministry had launched a report on the state of cover-up with the institution, and the judicial officers revealed that the crime had been committed by exploiting the commercial registry belonging to the citizen and the resident carrying out the commercial activity for his own account without a license.

In addition to the resident employing workers in violation of the residence and work regulations that do not have any contractual relationship with the institution, and the payment of their salaries in cash to avoid the control of the financial system.

The concealed resident in the institution disposes of the owner, collects its revenues exceeding 70,000 riyals annually, and transfers funds outside the Kingdom.

The Ministry published the judicial ruling issued by the Criminal Court in Riyadh, which includes fining and defaming violators, imprisonment for a period of two months with a suspension of half the penalty, closing the facility, liquidating the activity, canceling the license, canceling the commercial register, banning from practicing the activity, and collecting zakat, fees and taxes.

3 dead from unexplained pneumonia in Argentina