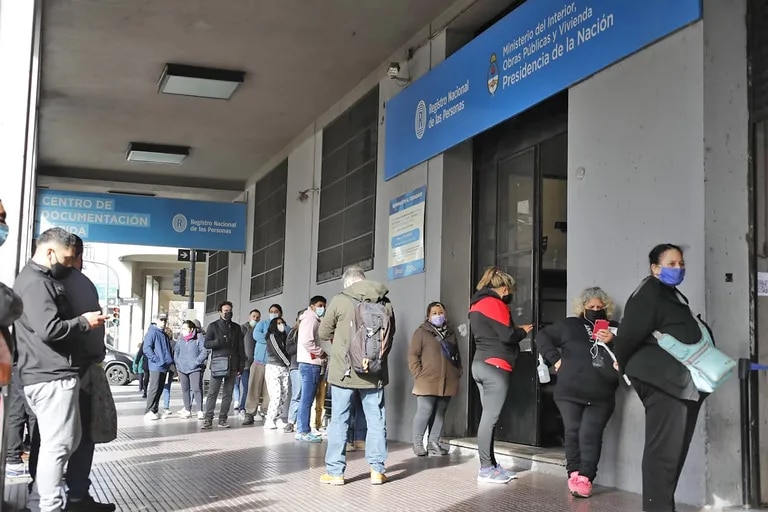 Another blow of the coronavirus pandemic in the lives of Argentines are delays in renewing the passport. THE NATION made a tour through three Buenos Aires venues of the National Registry of Persons (Renaper)to ask those who had just started the process how long it would take them to receive that document, and the answer was unanimous: “They told me three months”.

However, from said organization they affirmed to this medium that now the situation began to normalize and those who started the process today will have to wait only 20 business daysand not three months. They stressed that the delay is due to the scarcity of microchips in passports, a problem suffered by many industries around the world, but that there are ways to speed up the process if you need the passport urgently.

“I am Venezuelan and I came to make a passport for my son who was born in Argentina. I did not know about the delay in the delivery of this document, anyway I do not have any planned trip so there is no rush, ”he told THE NATION Gabriela, who preferred to protect her identity. She was at the Renaper headquarters located at Brasil 966. A few minutes later she was attended to, and at the end of the procedure she added: “Indeed they told me between three and four months of delay, I think it is a lot, I hope it arrives sooner, but Well, as I said, we are not in a hurry because we are not going to travel”.

From the Renaper they explained to THE NATION that the delay in the delivery of passports is a problem that was replicated in much of the world due to the lack of microchips that these documents use to deliver information on each passenger to the immigration authorities. They indicated that the situation is already normalizing and the delays for those who process it this week should not exceed 20 days. They pointed out that if they told people that they are going to have to wait three months, it is because the agents have not yet “internalized” that the wait will no longer be so long and they assured that internally they are going to reinforce that message so that they can give a more precise response. to applicants.

In addition, they added that, for those who urgently need a passport, there is the possibility of paying $7,500 pesos for the “express passport”, which is delivered within 96 business hours, while the regular passport process costs $4,000.

On the other hand, they indicated from the Renaper that if a person did the regular procedure more than 14 days ago, they need to travel urgently and have not yet received the passport, you can fill out an emergency form and after completing that virtual form, you will receive the document within a few days. And always, before receiving the passport, people will be notified by mail or SMS, depending on the contact they have left. It should be clarified that in this form the data of the trip to be made must be entered, to prevent any person without a justified reason from accessing that route to speed up the process.

“The delay in the delivery of passports is a global problem. In the United States there was a delivery time of five months. They are the same microchips that are in short supply for the auto industry and many others. Now the situation is practically normalized. If a person starts the process today, they will receive it in 20 days, while someone who starts the process next month will have to wait 15 days, which was the time it took before the pandemic. But, there is also the option of doing the express procedure,” Renaper sources indicated.

As they pointed out, due to the brake imposed by the pandemic, in addition to the microchips, various supplies of a production chain that Renaper defined as “complex” have been missing. To solve it, from the agency they affirmed that they have made arrangements with different suppliers in the world to speed up production.

“We try to find new suppliers of the supplies we need for production. In the case of microchips, there are only five manufacturers in the world, so it was difficult to unlock this situation. In addition, this year the expiration of many passports falls precisely because in 2011, when the chip began to be used in passports, many renewed that document and now those documents reached the expiration date. The local factory is fully operational. So far this year, 474,941 passports have been made, while in the same period of 2019, 202,420 were made,” Renaper sources described.

While sources from the Ministry of the Interior indicated a similar version to this medium: “The problem is that many passports expire this year and it coincides with the lack of microchips that carry these documents and that make the Argentine passport one of the safest in the world. However, this problem has already begun to unravel and the situation is returning to normal”.