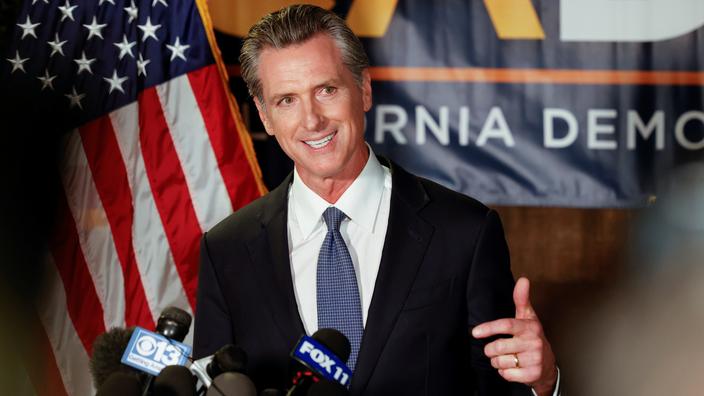 Gavin Newsom was the target of a dismissal procedure initiated by opponents of his health policy.

California Gov. Gavin Newsom managed to keep his post on Tuesday after a majority of voters rejected the removal process to remove him from office before his term expires. Newsom campaigned around Democratic Party values, recalling the challenge caused by the coronavirus pandemic and the threat that a Trumpist candidate will replace him.

The victory sees California, the most populous state in the country, remain under Democratic control. “The ‘no’ is not the only thing that has been expressed tonight”, Newsom said in a press conference. “We said yes to science, we said yes to vaccines, we said yes to end this pandemic.”

In the event of defeat, a Republican governor would have replaced Newsom at the head of this Democratic state. The recall process was sparked by criticism of Newsom’s pandemic policy, reflecting the deep division in the United States over what to do to stop it.

Republicans hoped public frustrations after months of lockdowns would be enough to topple Newsom. They were also counting on the weariness over more than a decade of Democratic rule in California. They had won four seats in the House of Representatives in the elections last November, a sign of the erosion of the Democratic lead.

Voters had to vote on two questions: Should we recall Gavin Newsom and, if so, who should replace him. Only a few of the 46 names on the ballot were known to the public. Conservative radio host Larry Elder had a considerable lead on the second question and seemed almost certain to win if the recall was successful. His candidacy allowed Newsom to turn the campaign into a choice between the two figures, rather than a referendum on his performance. He called his opponent “More extreme than Trump”.

In 2003, a similar process resulted in the ousting of the incumbent governor, propelling actor Arnold Schwarzenegger to his post as governor.

Newsom has also saved his chances of becoming a Democratic candidate in an upcoming presidential election. But he risks ending up quickly in a new ballot against Elder, with the governor’s election taking place next year.