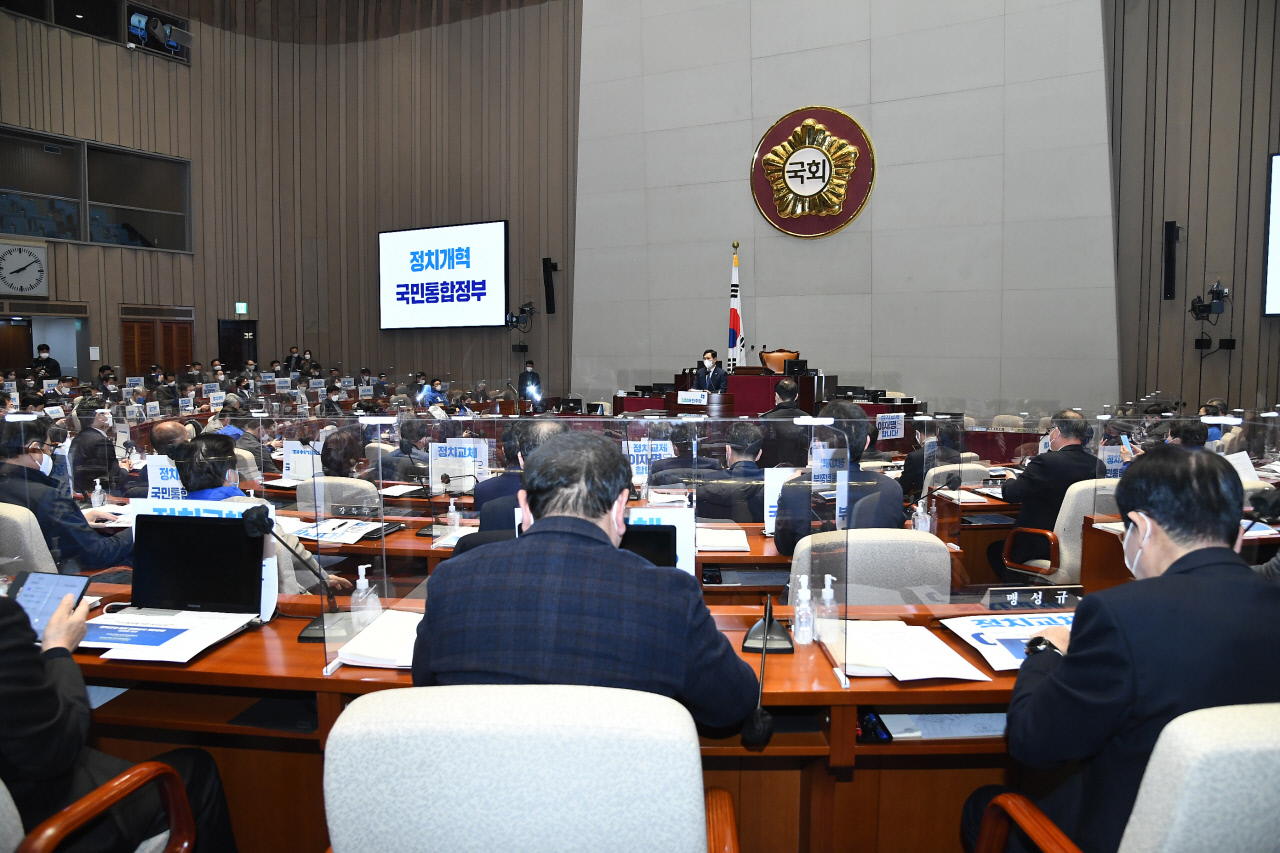 Song Young-gil, chairman of the Democratic Party of Korea, speaks at a general meeting of the members of the National Assembly held on the 27th. yunhap news

The Democratic Party of Korea held a general meeting of the House of Representatives on the 27th and adopted the political reform proposal proposed by Democratic presidential candidate Lee Jae-myung and announced by Democratic Party leader Song Young-gil as its party theory. The party policy decided on measures for multi-party coalition politics, such as the Prime Minister’s National Assembly Recommendation System, the Satellite Party Prevention Act, the four-year presidential term system and the runoff voting system for the presidential election, and the introduction of the major constituency system for local elections. The purpose is to show the will of the Democratic Party to implement political reform ahead of the presidential election.

The Democratic Party held a general meeting of the House of Representatives at 8 pm on the same day and ratified such a political reform bill as the party argument. The anti-satellite party prevention bill proposed by the Democratic Party lawmakers and the “two-person constituency prevention” bill, which consists of three or four constituencies for autonomous districts, cities, and county councils, were also established as part of the party’s agenda.

At the National Assembly on the same day, Song Young-gil, president of the National Assembly, said, “This election is not for election purposes, but Lee and the Democratic Party are going beyond a simple change of government. It came out of the passion to make it,” he said. Min Ho-jung, floor leader of the Democratic Party, said, “Today’s decision is to make it clear that we will not only announce the opinions of 172 lawmakers, but will actually enact legislation and institutionalize them after the election.”

Earlier, on the 14th, Candidate Lee held a press conference on the ‘Declaration of Overcoming Crisis and National Unity,’ including the formation of a national unified government and the Prime Minister’s National Assembly recommendation system. On the 24th, Chairman Song held a press conference on ‘Proposal of Political Reform for National Unity’ and officially proposed a political reform solidarity for multi-party coalition politics to the opposition party. As solidarity targets, Ahn Cheol-soo of the People’s Party, Shim Sang-jung of the Justice Party, and Kim Dong-yeon of the New Wave presidential candidates were selected. It was evaluated as a strategy to isolate Yoon Seok-yeol, the People’s Power presidential candidate, who leaned on the theory of regime change, into a political change structure.

Candidate Lee also suggested political solidarity to the opposition candidates in the 4th TV debate on the 25th presidential candidate. ),” he said, expressing his doubts. Candidate Lee replied, “I will show you what is decided by the parliamentary meeting after confirming it by the party theory,” and the Democratic Party decided to convene the parliamentary meeting the next day.

The Democratic Party leadership held a meeting with Democratic lawmakers belonging to the Special Ethics Committee of the National Assembly before the National Assembly meeting on the same day and discussed the handling of disciplinary measures, including Democratic Party members Yoon Mi-hyang, independent lawmakers Lee Sang-jik, and People’s Power lawmakers Park Deok-heum. CEO Song told reporters on the same day, “I strongly said to Rep. Kim Jin-pyo (Democratic Party), ‘Why are you so sluggish?’ The Ethics Special Committee held a plenary meeting on the 27th of last month and proposed a disciplinary plan for three lawmakers, and then the subcommittee decided to deliberate on the disciplinary plan, but no subcommittee was held since then. In a conference held on the 24th of last month, Song said, “We will expedite the expungement of the three lawmakers.” Ethics committee members will discuss the future schedule on the 28th.