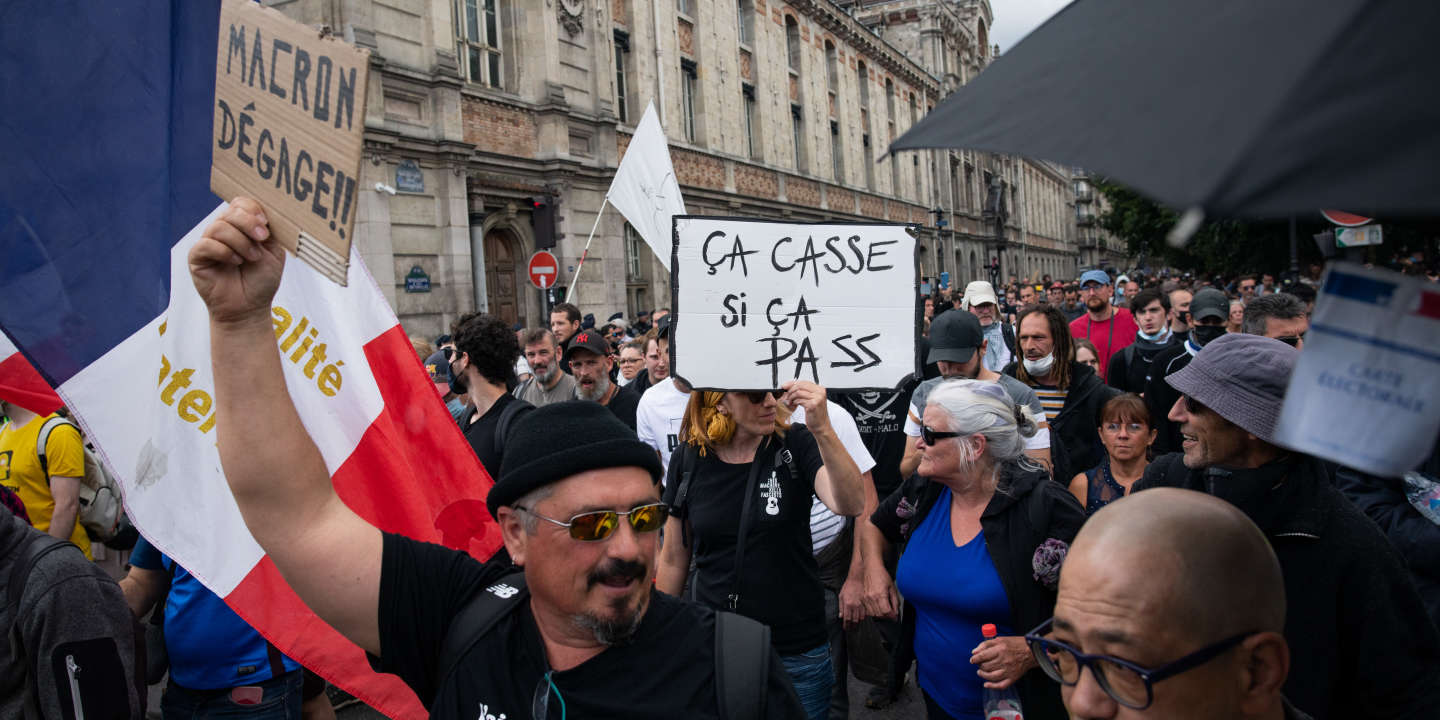 Did you catch the news this weekend? We have summarized the main information from the last two days for you.

Demonstrations have again gathered tens of thousands of opponents to the extension of the health pass in many cities of France, Saturday, in the name of freedom, for the third weekend in a row.

According to the services of the Ministry of the Interior, 204,090 demonstrators were identified throughout France, including around 14,250 in Paris, for 184 actions in total. Saturday, July 25, these demonstrations had brought together 161,000 people, including 11,000 in Paris. For this weekend of “crossover” of the holidays, the authorities expected around 150,000 demonstrators.

Tensions erupted in some processions, and 72 people were arrested during the day on Saturday, according to the latest report from the Ministry of the Interior. In Montpellier, demonstrators attacked a Covid-19 screening tent, installed near a pharmaceutical laboratory. Two AFP journalists were also attacked by demonstrators in the Montparnasse district in Paris.

Read our report: In Paris, the anger of the demonstrators against the health pass

In France, the number of patients with Covid-19 in hospital and in intensive care increased on Saturday July 31, according to figures published by Public Health France. Critical care services, which receive the most serious cases, had 1,099 patients on Saturday, against 1,072 the day before and 878 seven days earlier. The number of people hospitalized also increased slightly to 7,409 patients, against 7,363 on Friday, including 467 admitted in twenty-four hours.

Faced with the new epidemic wave affecting the country, the president of the Hospital Federation of France (FHF), Frédéric Valletoux, called in Sunday Newspaper to decree the general vaccination obligation against Covid-19. “We no longer have the luxury of taking half measures”, affirms the one who also carries the voice of hospitals and public accommodation establishments for dependent elderly people (Ehpad). “Everywhere, the indicators are on the rise: the epidemic context shows us the limits of intermediate measures. “

Emmanuel Macron announced on Monday July 26 that 40 million people – nearly 60% of the population – had received at least one dose of the vaccine against Covid-19. Just over half of the population is fully vaccinated, according to data from the Ministry of Health. The government is now targeting 50 million first-time vaccines by the end of August.

Read also Covid-19: the president of the Hospital Federation of France calls for decreeing the general vaccination obligation

French athletes collected medals again this weekend at the Tokyo Olympics. A first gold medal came from French judokas. Teddy Riner, Clarisse Agbegnenou, Axel Clerget, Romane Dicko, Sarah-Léonie Cysique and Guillaume Chaine won on Saturday in the final of the mixed team event by beating Japan, yet three-time world champion in an event which made its appearance in the Olympics this year. This is the eighth medal of the French judo delegation in these Olympics, a total never reached so far in an Olympic tournament.

On Sunday, French fencers Enzo Lefort, Erwann Le Péchoux and Julien Martine also won the gold medal, beating Russia in the final. Several silver medals were also won by French athletes this weekend, such as that of Florent Manaudou, who came second Sunday in the 50-meter freestyle.

On the athletic side, the eagerly awaited 100-meter event was won, to everyone’s surprise, by Italian sprinter Lamont Marcell Jacobs, in 9 seconds and 80 hundredths, ahead of American Fred Kerley and Canadian Andre De Grasse.

Greece and Turkey have been fighting, for several days, against serious fires which force the authorities to organize evacuations. In Greece, firefighters have been mobilized by the hundreds since Saturday in the northwest of the Peloponnese, where many fires broke out this weekend.

Five villages in the region were evacuated due to a major forest fire that broke out with scorching temperatures. According to an initial assessment, around twenty houses burned down and eight people were slightly injured. Suffering from respiratory problems and burns, the latter were transported to hospitals in the region. At the end of the Saturday afternoon, the seaside resort of Loggos was also evacuated, the fire having spread towards the coast.

Read also In Greece, the fire near Patras continues to rage

In Turkey, in the upscale resort town of Bodrum, a neighborhood was evacuated, as the flames were fanned by strong winds from the nearby Milas district, reported the TV channel CNN Turkey. Unable to take the road, 540 people were evacuated by boat, according to the channel. In the tourist town of Antalya, other evacuations also took place, according to the channel NTV. In recent weeks, Turkey has suffered from very violent fires which have already caused the death of seven people, according to the latest assessment of the authorities.

New day of fighting between the Afghan forces and the Taliban, who have been leading an all-out offensive across the country for three months. Sunday 1is In August, fighting took place in Lashkar Gah, one of the three Afghan provincial capitals under direct threat from the insurgents, who also approached Herat and fired rockets at the airport in Kandahar, the major cities in the west. and southern Afghanistan. The day before, clashes had taken place in the suburbs of Kandahar, cradle of the Taliban movement.

For three months, the Taliban have conquered vast rural territories, during an offensive launched in favor of the final withdrawal of international forces from the country, in particular the Americans on July 4 and the Germans on June 29. The Afghan forces have so far put up little resistance and essentially control only the main roads and the provincial capitals, some of which are surrounded.

Côtes-d’Armor. The 8-year-old child kidnapped in the Côtes-d’Armor by his father found safe and sound

Oman. Two dead in the attack on an oil tanker

Culture. Death of Jacob Desvarieux, co-founder of Kassav ‘, the inventor group of zouk with global influence