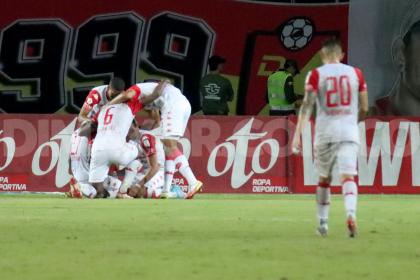 Second victory for Independiente Santa Fe in the BetPlay 2022-II League, a victory that catapulted those led by Alfredo Arias to fifth place with nine units. Andrey Estupiñán was in charge of putting the only goal on the scoreboard that gave those three points to the people of Bogotá in the best countenance despite the visit: Bogotá’s birthday.

Throughout the match, Independiente Santa Fe began to control the ball, but did not translate that dominance into scoring options beyond approaches in which the aim was a factor in not being able to hit the target. In the second half, and as the minutes passed, the people from Santa Fe left some spaces that Pereira took advantage of, but he could not break the visiting goal. About the end, that opening appeared on the scoreboard, and the consolidation of the victory.

For FUTBOLRED we analyze the victory of Santa Fe:

Lots of cravings: throughout the game, Independiente Santa Fe could not translate that possession into real options. In addition, he began to despair, especially in the complement playing whatever came out with shots from medium distance seeking to surprise, but without the desired effectiveness. The imprecise passes and not knowing what to do with the ball surrounded the cardinal box.

Injuries that weigh: During the first part, Santa Fe suffered two hits, the first from Wilfrido De La Rosa who was just returning to activity in these games after a hit that took him out of last semester towards the end. In his place, Andrey Estupiñán entered. Leandro Castellanos also had physical problems. Alfredo Arias endured it so as not to lose another window of change, and José Silva entered the complement. It remains to be seen how long they will be disabled.

He left spaces and took advantage of Pereira’s: as is usual in the centrals of Santa Fe, especially in José Manuel Aja, who went up constantly, leaving a lot of free space for the Pereirans to attack. So much so that Carlos Sánchez had to play as a central defender for long periods. Above all, in the second half, the locals took advantage of it to attack and José Silva had to save one or two shots. In the end, Neyder Moreno took advantage of the freedom, assisted Andrey Estupiñán who scored the only goal.

It was filled with infractions against: the VAR saved Santa Fe in an action in which Harold Rivera and Carlos Sánchez closed Emiro Garcés. The center-back decreed a maximum penalty, but it ended with the umpteenth free kick for Deportivo Pereira. The charges hit the wall, but any other specialist or rival could have taken advantage of those foul options.

6 “Toxins” in Foods You Can Easily Avoid