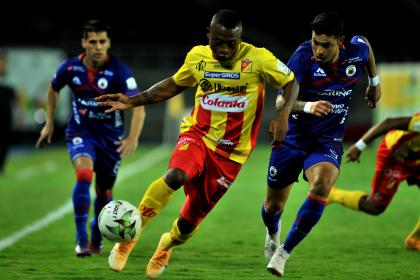 Deportivo Pereira gave the surprise in the Colombia Cup by qualifying for the semifinals of the Colombia Cup after equaling the aggregate against Deportivo Pasto (4-4) and winning the penalty shoot-out on a brilliant night from goalkeeper Santiago Castaño, who saved two charges from the white point.

Although Flabio Torres’ team started the game better, after Daniel Quiñones scored a goal with his hand that the fourth official canceled correctly, the team from Matecaña grew under the chant of support from its fans and before the closing the first half managed to equalize the global score. On a corner kick, Brayan Castrillón freely headed the ball and made Pereira celebrate after 37 minutes of play.

The match was a round trip, with clear options for both teams, but in the second half Ever Valencia increased the advantage to Matecaña with a goal from the left foot, from medium distance, which was impossible to stop for the Nariño goalkeeper.

When it seemed that Pereira was going to take the classification in the 90 minutes, a child foul on the right side allowed the volcanic team to have a quiet ball option, which he took advantage of well and gave life at the end of the game. Quiñones was the hero of the night when he scored the equalizer goal on aggregate.

After the 2-1 at Hernán Ramírez Villegas, the series was defined in the penalty shoot-out that left the team from Mateca as the winner. Alexis Márquez’s team will face Deportes Tolima in the next phase.