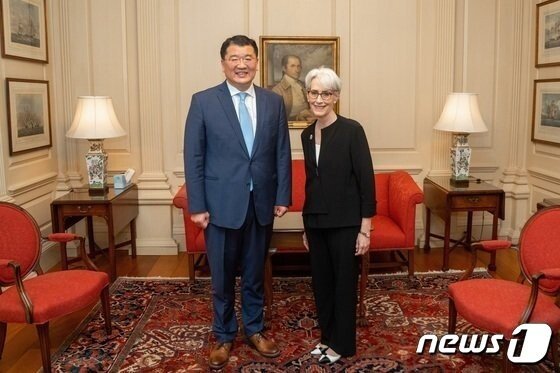 U.S. Deputy Secretary of State Wendy Sherman made a surprise visit to South Korea on the 21st, and on the 23rd of the coming 23rd, the ‘Strategic Dialogue’ with 1st Vice Foreign Minister Choi Jong-gun, etc. is leaning

Deputy Minister Sherman, who visited South Korea after completing the Korea-U.S.-Japan Vice Foreign Ministers’ meeting in Japan the day before, is expected to send a message to North Korea related to the resumption of US-DPRK dialogue during this visit. He emphasized that the United States is ready for dialogue with North Korea even during his visit to Japan, and urged the North for a positive response.

Currently, North Korea is demanding that the US withdraw its hostile policy toward North Korea, and last month, it rejected the Joe Biden administration’s offer of dialogue through the ‘Kim Yo-Jong and Ri Son-Kwon’ discourse.

In recent years, it seems that the focus is on deriving the results of the five-year economic development strategy and internal policy. It is evaluated that it is highly likely to enter ‘wait-and-see mode’ for a while. In a series of situations, the ROK and the US are expected to discuss intensively how to lead North Korea to the dialogue table through internal evaluation and information sharing.

Some predict the possibility that South Korea and the U.S. will specifically exchange opinions on vaccine support among humanitarian aid cards for North Korea.

On the 11th, the North Korean Ministry of Foreign Affairs sent a message to the United States saying that humanitarian aid should not be used as an excuse to ‘interfere in internal affairs’ through an article in the name of Kang Hyun-chul, a senior researcher at the International Economic and Technological Exchange Promotion Association.

In fact, it is an argument that can be interpreted as meaning that it will not get involved in the US ‘strategy’, such as returning to the dialogue table with vaccines as ‘bait’. However, there is also the interpretation that North Korea has left room for support, as the article is not in the name of the authorities or high-level personnel.

In addition, since Deputy Secretary Sherman is a ‘North Korean nuclear expert’, it is expected that the process of coordinating opinions with South Korea on the approach to North Korea that exhibits maximum flexibility and phased denuclearization pursued by the Biden administration will be rough.

It is expected that dialogue will be held on inter-Korean cooperation issues through these discussions between the South Korean and US vice foreign ministers. The Moon Jae-in administration, which has reached the end of his term in office, is actively starting the restart of the peace process on the Korean Peninsula, but North Korea’s response, which is the key, is virtually non-existent.

Recently, with the ‘abolition of the Korea-US Working Group’ between Korea and the United States, some have raised the prospect that inter-Korean cooperation will gain momentum. However, the Biden administration continues to place importance on the principle of sanctions against North Korea. It is expected that there will be discussions between Korea and the United States in this regard.

There are also observations that there may be discussions about human rights in North Korea. Deputy Minister Sherman met with the families of Japanese abductees at the US Embassy in Tokyo on the 20th.

He later wrote on a social networking service (SNS), “The United States is with Japan in urging the immediate resolution of the abductee issue.” It was evaluated that this was actually an extension of the Biden administration’s move, which values ​​values ​​such as human rights and democracy.

The Moon Jae-in administration is being evaluated as ‘passive’ on the North Korean human rights issue. In this regard, a representative example is that it has not participated in the joint proposal of a resolution on human rights in North Korea adopted by the UN for three consecutive years.

There are also observations that Deputy Secretary Sherman may indirectly emphasize the importance of resolving the human rights issue in North Korea to the ROK.

Meanwhile, experts estimate that it is unlikely that Deputy Secretary Sherman will issue a forward-looking message to North Korea during his visit to South Korea. Last month, the US State Department’s special representative for North Korea Sung Kim, who visited Korea last month, expressed his views on ‘meeting without conditions’ and ‘no incentives for dialogue’, but it is expected that a similar stance will be maintained.

Lim Jae-cheon, a professor at the Department of Unification and International Relations at Korea University, said, “It seems that the discussion will be focused on understanding the situation of North Korea, which is suffering from economic difficulties. However, the message to North Korea is highly likely to be at the basic level rather than concrete or forward-looking. This is because the United States is currently waiting for North Korea’s response,” he said.

After finishing his visit to Korea, Deputy Minister Shermyun will visit Mongolia until the 25th. Meanwhile, some foreign media are reporting that the US and China governments are discussing a visit to China by Deputy Secretary Sherman.