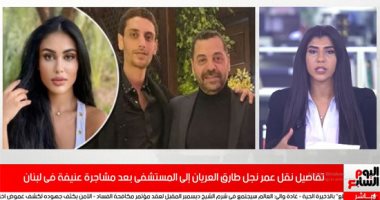 Youm7 TV broadcast special coverage by Shorouk Wagdy about the hospitalization of Omar, son of director Tariq El-Arian, after a quarrel with young men in a nightclub in Lebanon..

Actress Sherine Abul-Ezz confirmed that what was circulated on social media, with a quarrel between her and Omar Tariq al-Arian, is completely untrue, adding that she did not quarrel with Tariq al-Arian’s son, saying: “Omar did not strike with the pen and I did not quarrel with him, the story is from the beginning.” I was staying up late with my friends in a place and I met Omar by chance. I came close to say hello to him because I know him and we have a working friendship with him. He had a girl who was intensely with him, and all the people in the place took care of her. “..while press reports indicated that Omar Al-Arian underwent 3 surgeries following a quarrel in Lebanon because of a girl.

Omar is the son of Tariq Al-Arian from his first marriage, which was in the nineties, when he married a Palestinian woman from Jerusalem who works outside the artistic community, called Hala Al-Attal, and she gave birth to Omar in 1990.