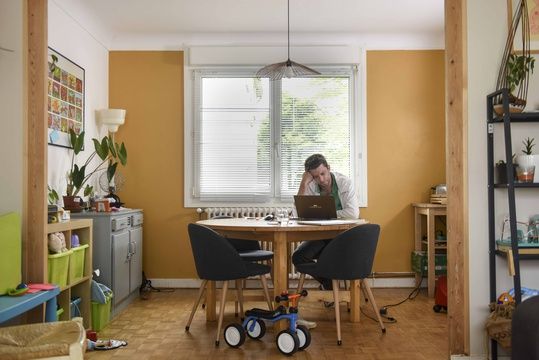 The health crisis has led to a deterioration in working conditions for more than 40% of workers, according to a large study published on Friday by Dares. The survey of the statistics service of the Ministry of Labor, carried out in the 1st quarter among more than 17,000 people in employment (excluding total partial activity or administrative closure), shows that even if the majority of working people (54%) describe working conditions work rather stable compared to the pre-crisis with a small minority even suggesting a slight improvement, many of them say they work longer (17%), with staggered hours (11%) and more intensely (21%) ).

One in four workers (26%) also report a deterioration in terms of emotional demands, being more often “upset, shaken, moved in their work”, and the same proportion say they fear more for their job. But the finding is more nuanced on other aspects concerning working conditions: they are thus 18% to report an improvement in terms of the meaning of work or in terms of autonomy (13%), data illustrating the diversity of situations during the crisis.

Among the 32% of workers who report partly degraded working conditions, in particular with an intensification of work and an increase in emotional demands but an even stronger sense of work (23%), women, managers, sectors health, education and retail, in particular, are overrepresented, says Dares.

Among the 11% of working people for whom working conditions are clearly degraded, there are more women, members of education or sectors such as banking, as well as teleworkers (41% against 30% on average). In this group, the work is more intense for three quarters (72%) and almost half say they work longer (46%).

On the health side, the health crisis has also had an impact, with 30% of workers declaring an altered state of health in January 2021, against 25% in a previous survey in 2019. The deterioration is even stronger from the point of view of mental health, underlines the Dares, with 23% of employees having a high risk of depression, more than double compared to 2019 (10%).