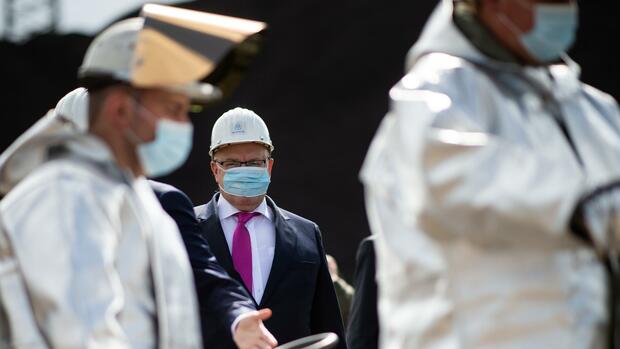 When politicians speak of “options” and at the same time assure that a state entry is the last resort, then the greatest caution is required. At the ailing industrial group Thyssen-Krupp It will soon become clear that the supposed last resort has long been the thoughtful option of the hour.

North Rhine-Westphalia’s Prime Minister Armin Laschet has taken up this idea brought into play by the trade unions and immediately expanded it with the magic formula of systemic relevance. His party colleague, Minister of Economics Peter Altmaier, did not want to contradict. It was he himself who caused a sensation long before the corona crisis with an industrial policy policy paper. There were branches of industry listed as systemically relevant, which we had not even suspected that they could be in the national interest.

Thyssen-Krupp would probably be able to slip under the billions of dollars in the federal government’s hydrogen offensive. But that might not help the traditional steel maker. The company not only has to cope with the politically desired change to climate neutrality, but the company is also in an existential crisis. It would therefore be no surprise if direct state aid were needed soon.

And that is not denied. That much is certain. Neither the NRW state chief nor the federal government will watch when thousands of steelworkers take to the streets shortly before the federal election. And that is what they will do after all that they have been through in the last few years of strategic errors and confusion.

In any case, there are a dozen applications on the table in Berlin from companies that are of the opinion that they have to seek direct state aid. Just why Lufthansa and Tui?

This question is justified. Because the travel company and airline asked for help first and loud enough? There is also contradiction among the billions promised to Deutsche Bahn. Or, better said, the competition speaks out with the demand to be supported just like the state company.

So far, the debate about state aid has centered on whether it will keep zombies alive. In other words, companies that are actually not viable, but thanks to the Corona panic, they are staying afloat with public money. But the more the state gets involved with companies, the more it has to be thought about whether competition-neutral industry solutions might not be the better way than rescue packages for individual companies.

Take Thyssen-Krupp, for example: If the state were to get involved here with a capital injection, they would be allowed to Salzgitter and other competitors rightly complain that management errors and the dispute among the group’s investors are now being ironed out with tax money. It is also no coincidence that Deutsche Stahl AG is now coming back into play, a merger of the already badly shrunk industry.

Comparable scenarios would then also be conceivable in aviation. The fate of the Condor vacation airline is still in the air. A federal government could intervene to regulate this if it is already providing billions for Lufthansa.

State holdings are not a temporary industrial accident

The problem with any direct state aid lies in the fact that the state automatically intervenes in competition, because it ensures the survival of some, but refers others to the generally accessible funding or aid pots. The idea is not far off to use the state as a consolidator of an overstaffed branch like aviation or a dying branch like the steel industry. Then the use of the tax revenue would at least be useful for something, one could argue.

Especially since it can already be predicted today that we cannot expect to get rid of the corona-based state capitalism in the shortest possible time. The economic recovery will take years. It will take even longer before Lufthansa and Co. can pay off their rescuers again. State holdings will not be a temporary industrial accident in our market economy.

The situation at a company like Deutsche Bahn is even more muddled. Because it has a dual role. There is no question that the owner is helping his largest corporation financially. However, the Deutsche Bahn not only runs trains, it also operates the rail network on behalf of the state, which in turn is used by Deutsche Bahn’s competitors. So where can the federal billions flow without eliminating competition?

Admittedly, the railway is a special case because the state is the owner anyway and the company also performs sovereign tasks. But the example of this group is also a warning of how the state can get entangled in other industries. It is better not to even consider state investments as an option.

More: Thyssen-Krupp should get help from the state.