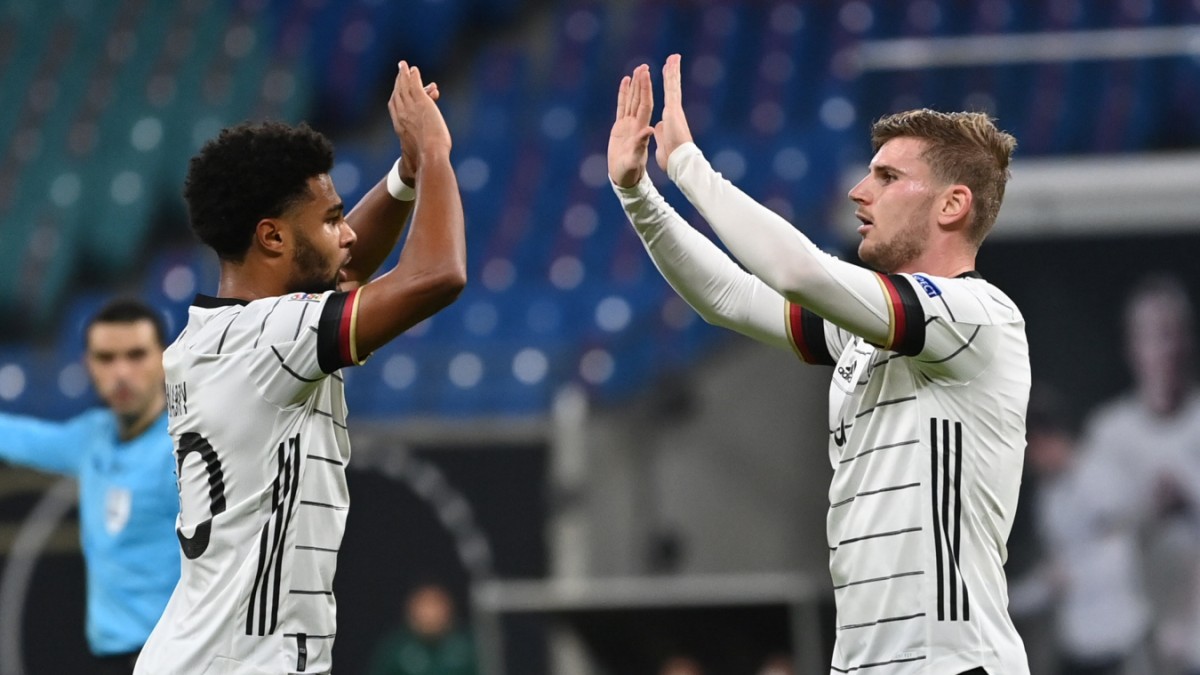 Every game has its prologue, and that of the Nations League game Germany-Ukraine on Saturday evening began on Friday. Four players and an official of the Ukrainian delegation had tested positive for Corona. Only a few hours before the start of the game and after the local health authorities had decided not to send more Ukrainians into isolation, the game was assured: A new series of tests with the Ukrainians gave the same result as with Joachim Löw’s DFB team: all negative!

The evening turned out to be extremely positive for the German team: In a game in which the post was held three times, the German team won against the Ukrainians with goals from Leroy Sané (23rd) and Timo Werner (33rd / 64th) .) with 3: 1. “It was not that easy. But overall we can be satisfied,” said national coach Joachim Löw on ZDF. With that, the DFB-Elf wrested the championship lead from the Spaniards – because Luis Enrique’s team did not get more than 1-1 in the third game of Group A4 in Switzerland.

The German team, which had changed to seven positions compared to Wednesday’s test match against the Czech Republic (1-0), quickly had a shock to digest. For a good ten minutes, every event in the game was played out in half of the Ukrainians, then the DFB team fell victim to a striking defensive disorder. At the first counterattack by the Ukrainians, left-back Philipp Max poked central defender Robin Koch in the fog of their own penalty area, and before they could see the ball long ago, the ball had flipped to the massive center forward Roman Yaremchuk, who had escaped his guard Niklas Süle. With a full right-footed shot from eleven meters, which would have done his coach Andrij Schewtschenko credit, he overcame the powerless Manuel Neuer, who equalized the 95 international matches of the great Sepp Maier on Saturday.

The ball stayed with the German team even after the deficit. Löw’s trick, however, in view of the absences of Toni Kroos (yellow card) and Joshua Kimmich (injured), to pull the nominal central defender Koch in front of the defense in order to disturb the circles of director Oleksandr Sintschenko, was so often ineffective that the DFB team hardly exuded security. The reason: Zhenchenko belongs to the genus of eels and cleverly eluded any access. Conversely, the fast-paced storm – Timo Werner, Leroy Sané and Serge Gnabry – had a hard time finding rooms due to the extremely deep defense of the Ukrainians. You could tell from Shevchenko’s eleven that she had the game where she had dreamed it. But then the Ukrainians ran into a classic counterattack, contrary to the libretto of the game.

Leon Goretzka stole the ball from Zintschenko, spotted his Bayern comrade Leroy Sané on the right side, who laid the ball on the edge of the box with his left instep and then with a left-hand shot à la Arjen Robben flat on the second post. Two long shots from Goretzka (26th) and Antonio Rüdiger (28th) later, Koch then introduced the 2: 1 in the style of a “ten”. Koch served Goretzka with a lob in the penalty area, the Bayern professional brought the ball under control with an artistic scissor stroke and crossed to Timo Werner. Today’s Chelsea striker hit his head from three meters on his return to the old place of work in Leipzig (33rd). He was so free that national team manager Oliver Bierhoff’s words applied before the game, according to which the risk of being infected on the pitch “is not so great”.

After the half-time break, the Ukrainians pushed their ranks further forward. And it began – for the first time in this game – a phase in which the Ukrainians also showed the will to prove that they can do something with the ball. In the 52nd minute, the metallic sound of aluminum echoed for the first time through the ghost game-free stadium in Leipzig: Sintchenko held on from 16 meters, but Süle deflected the shot to the post. Gradually, however, the DFB team succeeded in snatching the ball back – also because the distance between the direct neighbors and Koch had become smaller.

Sané, Werner and Gnabry left a cascade of good opportunities behind (Werner rightly claimed a hand penalty); in the 64th minute, however, Werner finally scored 3-1. Ilkay Gündogan, who gave more and more control over midfield in general and the structure of the German game in particular with his name, matched right-back Matthias Ginter, who served Werner directly. His shot was deflected slightly – to the disadvantage of the Ukrainian goalkeeper Andrij Pyatov.

Afterwards the game splashed along like the fountain in front of the German team hotel. Until Marlos, the Ukrainian of Brazilian origin, put the ball from the right corner of the box against the second outside post with his left (75th). Only then did national coach Löw change for the first time: Julian Brandt, who soon introduced himself well, came on for Werner with a shot from an acute angle that steered goalkeeper Pjatow to the corner (78th). A Goretzka header landed in his hands shortly afterwards. After Koch lost the ball in the center, the Ukrainians made the third and last shot from the post, this time by Junior Moraes (83), before a lackluster, but deserved victory went down in the annals of the German team.