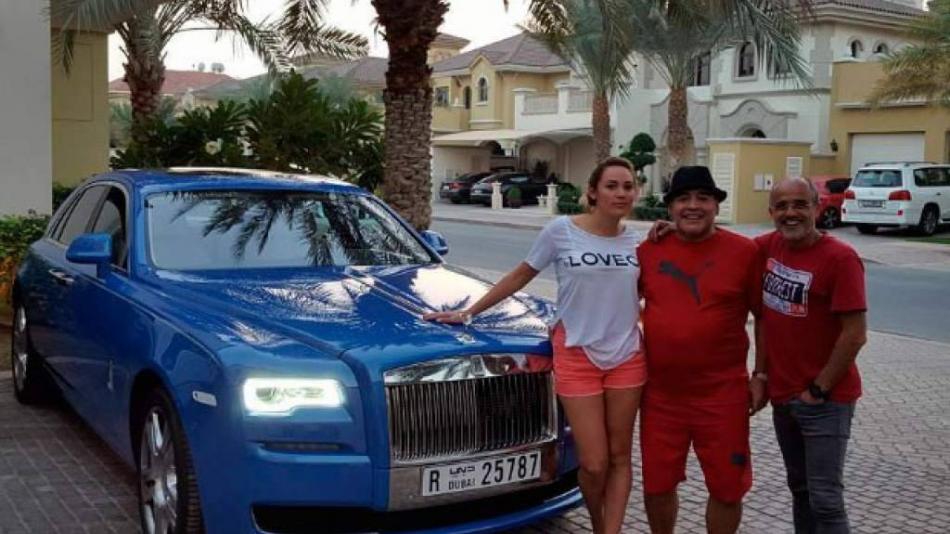 The hand of God that helped him Diego Armando Maradona To score England’s first goal in the 1986 World Cup quarterfinals, he took it this Wednesday, November 25, amid a halo of glory and immortality, but also controversy.

On the pitch, the forward – attacking midfielder and later coach – managed to conquer three continents with his genius. And so he managed to amass a fortune of more than 75 million dollars.

(We invite you to read: The juicy and controversial fortune left by Diego Armando Maradona).

An Overcomer Hunta van was waiting for him upon his arrival in Belarus. The civilian version of a military vehicle.

But off the pitch, the soccer star was a mortal who had his dreams shaken. His addiction to drugs, ended up expelled from the courts, in the United States World Cup, in 1994.

(You may be interested in: Diego left, the people’s player).

That day, after a game against Nigeria, which Argentina won 2 for 1, they discovered that in addition to a passion for football, ephedrine, norephedrine, pseudoephedrine, norpseudoephedrine and metaephedrine ran through their veins. The punishment included the cancellation of the American visa.

Maradona blamed a flu, but had already snorted coca in a match in which his squad at the time, Napoli, faced Bari, in March 1991. The episode, which cost him a 15-month sanction, was the first sign that the ‘kid’, who left a humble neighborhood in Argentina to put the world at his feet, was in trouble.

(Further: Resale of tickets: 6 ‘tsars’ begin to pay punishment from the SIC).

For some, his career went haywire when he arrived in Italy in 1987 at the age of 27. Although he began to fill his bank accounts and achieved 5 titles – among them two Scudettos and the UEFA Cup -, got a catch ticket for drug possession: he was handcuffed and jailed in April 1991.

Diego Armando Maradona always liked driving his own cars. In this 2011 image, the ’10’ and his current partner, Verónica Ojeda, leave a clinic in their car in Buenos Aires.

By that time, the Napoli fans were delirious about the Argentine. His unsurpassed genius and his story inspired. In his childhood he lived in a house in the Villa Fiorito neighborhood, with a dirt floor, thatched roof and a single room, where he slept with his 7 siblings. He would walk 15 blocks to the training court and a neighbor would give him a sandwich for lunch.

But his discipline, his mental and physical strength, and his unshakable faith not only made him an idol, but allowed him to expand his investments. Only his house in Barcelona, ​​adorned with diamond balls, was valued at 10 million euros; and that of Posillipo, south of Naples, was almost 1,000 square meters.

Diego Armando Maradona starred in various controversies and excesses during his career, including his arrest for drug possession.

And although some of Maradona’s earnings link them to the mafia, he said that the Italian “camorra” had only been accepted by security; and he swore that he did not meet Pablo Escobar. But today a photo circulates with a former Colombian player and members of the Envigado Office (alias ‘Danielito’ and ‘Beto’), which he failed to explain.

And a federal agent told EL TIEMPO that Maradona was under his magnifying glass due to his frequent trips to Colombia and especially to the Rosario Islands, where he participated in 3-day parties.

(We invite you to read: The secret match of the soccer ‘exzar’ Luis Bedoya in the USA.).

He received a second injection of money when he arrived, in 2018, to lead Dorados, a team in Sinaloa, Mexico, land of ‘El Chapo’ and other mafias.

“Taking Maradona to Sinaloa is like taking a child to Disneyland,” wrote sports journalist Rafael Martínez.

Photograph of the entrance to the San Andrés neighborhood, the exclusive sector of Tigre where he was when he died.

Taking Maradona to Sinaloa is like taking a child to Disneyland

By that time, Maradona already had hotel investments in Italy and Cuba, where he lived for 4 years under the protection of Fidel Castro. In addition, in China and Italy he had contracts for sports centers that bear his name.

(It may be of your interest: The audios of the alleged murky payment to the football ‘tsars’).

They say that, in the end, his earnings were represented by the salary of the coach of the Gimnasia y Esgrima de La Plata club and sponsor of the group. And that the multinational Konami paid him rights for the use of his image in the PES video game.
All those assets will enter the succession and will be distributed among his children and ex-partners, since Maradona did not manage to fulfill the threat that he would donate everything, due to family fights. They will also distribute their collection of luxury cars.

When he started at Boca Juniors, he had a yellow Fiat 128. Later, the Argentinos Juniors fans gave him a Mercedes Benz 500, of which they only made 1,100. But in Italy he parked a Ferrari, which the parent company changed the traditional stubborn color for a Nero Met, to the liking of ‘Dieguito’.

(In context: New scandal splashes at the head of the Football Federation).

When he returned to Argentina in 1995, he asked for two red Ferraris. And he was escaping the press in a pink Scania truck that he abandoned for a black Porsche when he became a national team technician. And in Dubai, when he led the Al Fujairah team, he had a blue BMW i8 and a giant Rolls Royce Ghost, the same shade of blue as the albiceleste. In Belarus, they gave him an Overcomer Hunta pickup, the civilian version of a military vehicle.

(See here all the articles of the Investigative Unit of EL TIEMPO). Now the idol rests in peace and the legend begins, and the fight for his fortune and for the rights to tell his story.