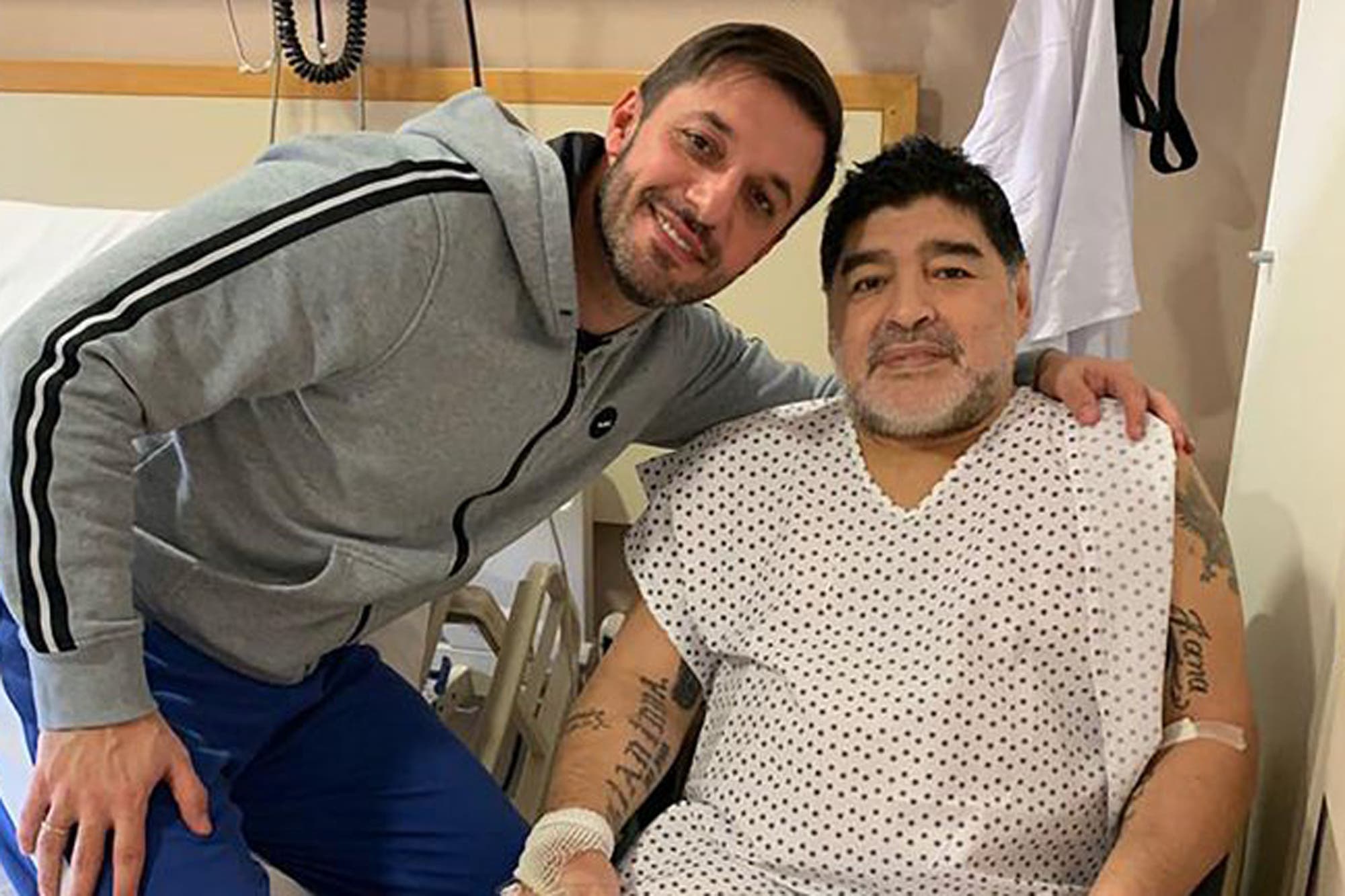 On October 30, Diego Armando Maradona Ended his 60th birthday without wanting to see anyone. He attended the game of his last reciprocated love on television, Gymnastics and Fencing La Plata, and did not want more. He went to sleep. Before, he had worried an entire country and half the world about his state of health. Diego, the most universal Argentine, had his legs trembling and he needed help to stay upright. It was the last time he stepped on a soccer field.

The hours before the game, the birthday, had been of debate and downturn. Diego did not want a massive celebration. Her last dream was to unite her five children: Dalma, Gianinna, Jana, Diego Jr. and Diego Fernando. They were almost all, but separated. And Diego Jr. could not travel from Italy, where he resides, because his swab tested positive. The idol of so many millions in the whole world was no longer as in the previous weeks. The diet of those days, for example, was a memory. The GRANDPA and the Professional League They offered him the celebration in the Lobo court, in the opening match of the Professional League Cup. Fluff, the nickname he liked best, got excited. He was also moved to see more than half an hour of video greetings from some of his idols, from Ronaldinho (“Your number 1 fan”) to Ricardo Bochini, passing through José Mourinho, Favio Cannavaro, Christian Vieri, Juan Martín del Potro, Sergio Hernández, Pato Fillol, Jorge Burruchaga and Nery Pumpido, among others. They passed one after another, in the forced virtuality of the pandemic that took him away from the affection of the people, his people.

“If you go to the court, don’t go to the game”, his lawyer advised him, Matías Morla. He repeated it on a television mobile. But Diego was. He appeared clad in the YPF diver, light years away from that Maradona who piled up rivals and advanced at a steady pace between the defense of England, as in Mexico ’86. It was the same Maradona of the unforgettable sports feats. It was, finally, another Diego, struck by the sadness of missing Dona Tota, especially, and Don Diego; overwhelmed by pandemic lockdown.

On his birthday, Diego returned home, watched his team on TV, and went to bed. “He did not want to know anything with anyone”, related to THE NATION someone who knew in detail how his last weeks were. The next day his mood did not change. And on Sunday the outlook got worse. First alert: the lack of appetite. Second alert: not wanting to leave your room. On Monday, Diego spoke to Morla again: “You can’t go on like that,” his lawyer told him. The Ten, blunt: “Stop j … Everyone wants to admit me! “ 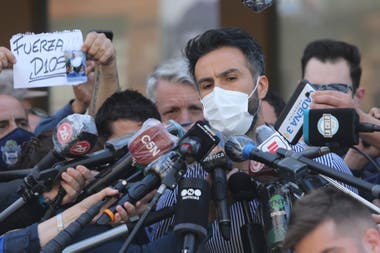 Then his personal doctor intervened, Leopoldo Luque. Neurosurgeon. He went to Brandsen’s house, accompanied by the entire team of psychologists that attended to the star. They didn’t see it well either. Luque moved a token: “Let’s go to Dr. Tunessi’s clinic [Flavio, uno de los integrantes del cuerpo médico de Gimnasia]. There they will give you a flat for you with all the comforts. Nobody is going to treat you badly. “Luque spoke to him as a doctor; Diego responded as what he always was: a lover of the ball. “I have to direct on Sunday.” There were six days before the meeting with Vélez, for the second date of the Professional League Cup, today renamed in honor of the best player who was born in these lands. “If you come to the clinic, you will play, not direct,” Maradona heard. The phrase convinced him. And they went to the Ipensa clinic in La Plata, which would be their penultimate residence.

Maradona did not arrive dehydrated. Yes I was anemic. The most important problem was detoxifying his body of medications that had been prescribed for him and that were no longer working for him. It had to be cleaned, and that took time. Monitoring On Tuesday morning, November 3, Luque gave a press conference at the Sanatorium in La Plata. It was pure optimism. If all went well, the idea was to quickly return to Brandsen. Maradona, a unique footballer, was also a unique and very special patient. Y wanted to leave.

A control scan changed plans. The same study that had done well in September now showed a mole on the head. As soon as the diagnosis was spread, the footballing country was put on pause, on alert. With symptoms of anguish. “Subdural hematoma” was the diagnosis. It was surgical, had to operate. Maradona got it. 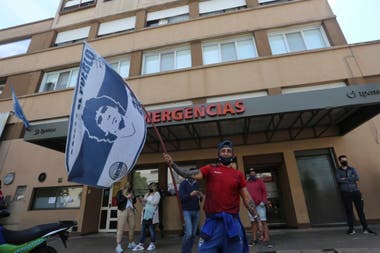 Fans in front of the clinic where Maradona was admitted shortly before the outcome. Source: LA NACION – Credit: Santiago Hafford

The sanatorium was transformed into a sanctuary, full of pilgrims who approached the doors to find out about the idol’s health. Up there it was Gianinna, the youngest of the two daughters he had with Claudia Villafañe. And from that place, she accompanied him to the operating room at the Olivos clinic, where Luque and a team of doctors would perform the surgical intervention. The Buenos Aires government offered the SAME helicopter, but the professionals who attended it understood that the best thing was the transfer by land.

Every step in Diego’s life was a caravan. This one, on the way to surgery, was not going to be the exception. The rest of his family was waiting at the Olivos clinic. His sisters, plus Claudia, Dalma, Jana, among others. That clinic in Olivos, like the Cantegril in Punta del Este (January 4, 2000) or like the Suizo Argentina in Buenos Aires (4/18/2004), was the field of another medical (and risk) party that Maradona had to face and win. To the joy of millions, there was another dribble. Diego was in conditions to face the operation and, after 40 minutes, he left the operating room. Successfully. The bruise was gone. Then came the time of rehabilitation. 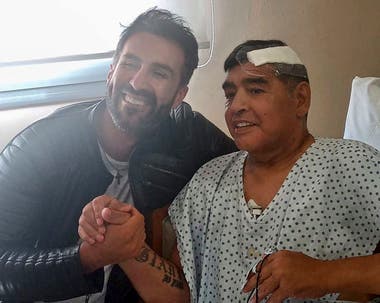 Maradona showed an “expected recovery” for a surgery like the one they had performed. However, in one of the medical parts, Luque spoke of “addiction” and the alarms rang again. Against all odds, Diego stayed a week at the clinic, something that many considered a record for what his anxiety is. He received vitamins and serum. “He came out clean,” they said near him.

Rehabilitation had to be organized. And the speculations began, which included an eventual return to Cuba, where he had already been for a while. They were advised by a specialized clinic. There was no way: Maradona wanted green. Nature. He needed air. In the area of ​​Tigre. A borrowed house, in the San Andrés neighborhood, on Italia avenue, located in Benavídez. Very close to Gianinna’s place of residence. 20 minutes from Dalma. It was there. He did not know, but that would be his last home.

The transfer, which in medical jargon amounts to an “discharge”, was resolved. At home, Diego would have medical assistance and nurses 24 hours a day. Johny Espósito, his nephew would live with him. Monona, inevitable, I would cook. It would have a psychologist, psychiatrist and kinesiologist. Apparently for the first few days the plan worked. Jana came to visit him every day and even offered to stay with him. He was still joking, a sign that there was hope. “No woman tamed me, are you going to tame me?” He used to joke to his psychiatrist, Agustina Cosachov, who specializes in addictions. Maradona was still Diego. Or Dieguito, as his Brazilian friend Renato Portaluppi called him from affection.

The initial joy dispersed as time passed. The idol of millions was invaded by melancholia. Although the stitches had been removed from his head, he had other injuries. Deeper and less superficial. “He threw the cell phones, they were out of battery. I did not want to talk to anyone”, someone who had known him for years graphed. Perhaps that explains why so many wanted to communicate with him in the last time and could not. Diego, according to those who treated him, was a close friend of his friends.

“I was sad”, who saw it coincide. His psychologist and his psychiatrist were hard at work with him. To smile back at the top sports idol in a country was a challenge. Maradona, who breathed football, had seen every game he could. Those of Boca and those of Gimnasia, the team that allowed him a year of touring the whole country to say goodbye in a big way to a town that loved him. Court by court. In the last five days, that were eloquent shows of his state of mind, Diego “He didn’t even care about the ball anymore.” And the worst: he wasn’t even joking. I had lost the spark. It was fading inexorably. 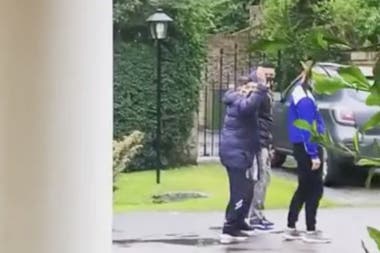 The last images of Diego Maradona were captured by a neighbor of the country where the former soccer player resided.

On Tuesday night the 24th, Johny Espósito, the nephew who lived with him (and who went out of his way for his uncle) saw him for the last time. It would be the last contact with his blood. The next morning, Diego did not react. Ambulances Resuscitation attempts. The news that nobody wanted to give. The days of the last Maradona were over. Another Maradona. On Wednesday, the god of the ball reminded all the inhabitants of his country that he was like them: mortal, earthly. And, although many did not want to see or tell about it, it was clear that one of his unforgettable dribbles would be the last. In this case, off the court. It happened that November 25. To definitely become a legend. An immense legend that travels every part of the world as tributes and displays of affection. That causes immeasurable pain.

The last Diego Maradona. Mortal, yes, but at the same time immortal.