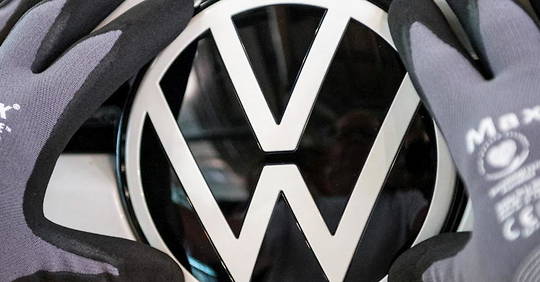 Le dieselgate has yet to deliver everything it owed. After Renault on Tuesday, it was Volkswagen’s turn, then Peugeot’s turn on Wednesday to be indicted in France for “deception”. Volkswagen disputes “any prejudice” for French consumers, said the automaker in a press release announcing its questioning in France, and confirming information from Europe 1.

His former boss Martin Winterkorn was indicted in Berlin for false testimony before a parliamentary commission of inquiry into this resounding scandal of rigged engines, the German prosecutor’s office said on Wednesday. In France, a judicial source confirmed to Agence France-Presse the indictment of Volkswagen on May 6 for “deception on the substantial qualities of a commodity causing a danger to the health of humans or animals. “.

Peugeot overtaken by the patrol

According to this judicial source, Volkswagen was placed “under judicial supervision with the obligation to post a bond in the amount of 10 million euros and the obligation to provide security in the form of a bank guarantee in the amount of 60 million euros” . In a press release Wednesday evening, Stellantis, Peugeot’s parent company, announced the indictment of its subsidiary “because of allegations of deceit relating to the sale of Euro 5 diesel vehicles in France between 2009 and 2015. “

“Our subsidiaries firmly believe that their emission control systems met all the requirements applicable then and continue to meet them today, and they look forward to the opportunity to demonstrate it,” added the group. A judicial source confirmed the indictment on Wednesday of the count of “deception causing danger to the health of man or animal”.

The dieselgate, which has given rise to legal actions in many countries, has already cost Volkswagen 30 billion euros, largely in the United States where the German group pleaded guilty to fraud in 2017.

Volkswagen admitted in the fall of 2015 that it had equipped 11 million of its diesel vehicles with software capable of concealing emissions that sometimes exceed 40 times the authorized standards.

Investigations into this scandal have long been slowed down by a legal battle before the Court of Justice of the European Union (CJEU). In France, investigations by the Directorate-General for Competition, Consumption and Fraud Control (DGCCRF) had highlighted Volkswagen’s “intentional nature of fraud”.

The gendarme of Bercy noted, in a report of February 11, 2016 of which Agence France-Presse was aware, that nearly 950,000 diesel vehicles, equipped with the fraudulent device, had been sold by the German group on French territory. .

But the company disputes any guilt in this case and believes that after having already paid in Germany, in 2018, a “fine of one billion euros for allegedly identical facts” a “double conviction (…) should be prohibited” in France.

“For Volkswagen AG, the facts examined by the French courts are included and identical to those already decided in Germany, but the investigating judges told us that it was necessary, according to them, to continue the investigations before deciding definitively on this subject “, said Me Nicolas Huc-Morel, lawyer for the constructor, at Agence France-Presse.

The company has already challenged this analysis of the magistrates before the investigating chamber of the Paris Court of Appeal. His appeal is awaiting examination.

Let what about PSA and Toyota?

“All the elements seem to confirm the infringements committed by the various manufacturers. The owners of injured vehicles do not understand that there is not a trial as quickly as possible ”, reacted Me François Lafforgue, lawyer for the associations Écologie sans frontières, Respire and around a hundred vehicle owners.

The dieselgate scandal is the subject of various legal information in France. The one concerning Volkswagen has been open since February 16, 2016.

Two other manufacturers, PSA (Peugeot-Citroën) and Fiat Chrysler, now married in the Stellantis group, are likely to be indicted in their turn in France and should be questioned very soon, according to corroborating sources. The indictment is a preliminary step to a possible trial in France.

READ ALSORenault and PSA have they “rigged” their diesel engines?

The dieselgate also occupies German justice. The former boss of the Martin Winterkorn group is accused of having “knowingly lied” to deputies about the moment from which he became aware of the presence in the engines of VW cars of illicit software, according to a press release from the prosecution on Wednesday at Berlin.

The prosecution believes that he knew “as early as May 2015” that the cars were capable of defeating the antipollution tests, where Mr. Winterkorn explained to Parliament that he had only learned about it in September 2015.

He must already be tried in Germany, along with other officials of the group with 12 brands, during a river trial from September for “organized gang fraud”.