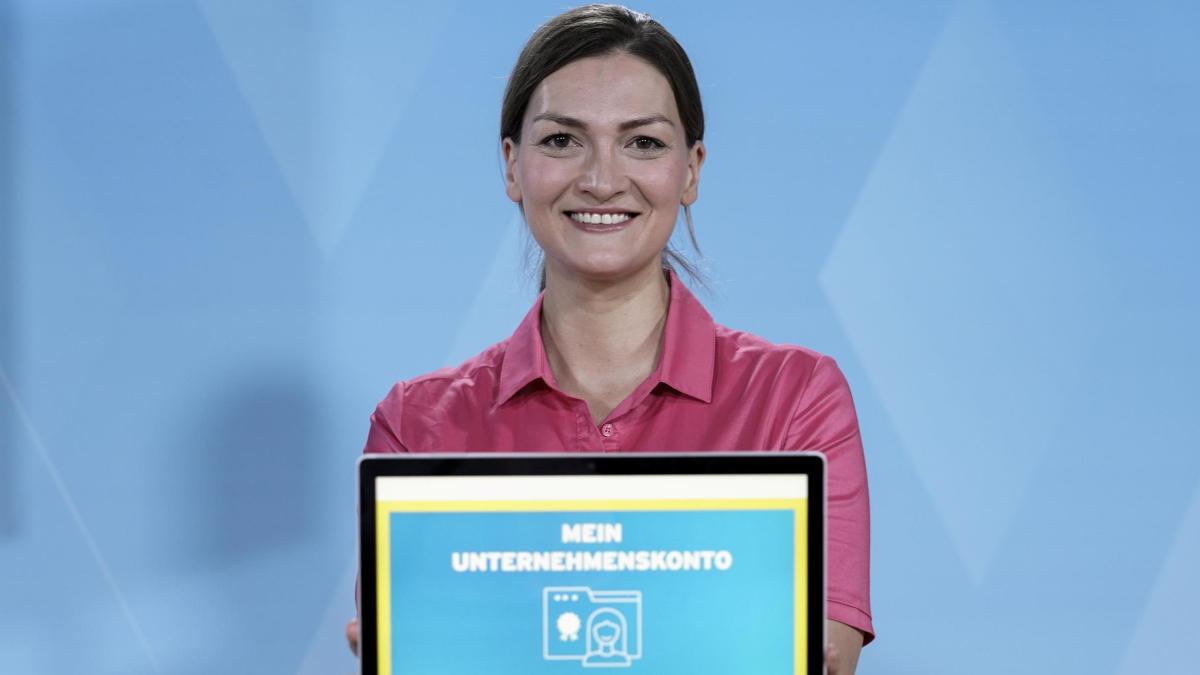 BListening sessions cost Germany’s companies time. A lot of time. After all, every company has an average of 200 contacts per year with various offices. And the vast majority of them still run analogously, i.e. either by letter, fax, telephone or through face-to-face meetings on site. Now, however, everything is supposed to be different – through the so-called “uniform company account”.

What is meant is a digital account through which companies from Flensburg to Garmisch-Partenkirchen and from Aachen to Görlitz have been communicating with the authorities since June and handling administrative services from the community level to the federal government. “We are making a quantum leap in communication between companies and authorities,” says Judith Gerlach, the Bavarian State Minister for Digital, with conviction.

“We now have the opportunity to rethink administration – from the user’s point of view instead of the government’s point of view. Through digitization and technology, we can change processes accordingly and create a modern new state, ”said the CSU minister in an interview with WELT.

Gerlachs Haus developed the corporate account together with the federal state of Bremen in a leading role for the federal and state governments. Bavaria is responsible for the user account, Bremen for the technology of the functional mailboxes and the authorization in the company. The experts worked on the new company account for around a year and a half.

The coordination work in particular took a long time, but the technology was quickly ready. In the current pilot phase, the digital administrative process is initially available in Bavaria, Bremen and North Rhine-Westphalia. But Saxony, Baden-Württemberg, Hamburg, Mecklenburg-Western Pomerania and Saxony-Anhalt should also be activated by the end of the year. According to the plan, all other federal states will follow in 2022.

The account is based on the already established Elster technology. This has been used for many years in the tax administration and most recently also in the processing of the federal government’s corona aid. Companies can use their existing Elster certificates to log into online services, fill out and send applications in an authenticated manner and finally receive notifications from the associated administrations via a central mailbox.

According to the administration, up to 200 certificates can be applied for and distributed per company. A decision can then be made in-house as to which certificates have which rights.

The economy is open-minded. Sabine Herold, for example, the managing partner of the adhesive manufacturer Delo from Windach in Bavaria and always a spokesperson for German medium-sized companies when it comes to combating bureaucracy, considers the digital company account to be a “fundamentally very good thing”.

She also appreciates the use of Elster as a pragmatic approach. “After all, this solution is secure and established, and many employees even know it from their own tax returns.”

The Rhine-Ruhr entrepreneurs’ association also welcomes the initiative from Bavaria and Bremen. “The company account is an opportunity with a lot of potential,” says Marcus Korthäuer, Chairman of the Board of Directors of the 700-member employers’ association based in Duisburg and the main occupation owner of the mechanical engineering company Espera-Werke. “That can and will reduce bureaucracy.”

The initiative is not only an excellent idea, it is also an absolutely necessary step. “We urgently need digital administration in Germany, as the Corona crisis recently demonstrated impressively.”

Now, however, the topic must also be broadly based. In any case, a WELT survey of companies and trade associations shows that many industries did not even get the go-ahead in June.

Minister Gerlach is calm, however. “I would be very surprised if the topic does not spread quickly and be accepted by the economy. Because the companies save time and money. ”

Company account must be able to cover various roles in companies

Politicians are therefore in talks with the German Chamber of Commerce and Industry (DIHK) and the Working Group for Economic Administration (AWV). “The aim is to communicate the company account to the economy and to include suggestions from the economy,” says Gerlach.

And there are already initial suggestions. For example from the DIHK. “There are still some requirements to be met,” says Ilja Nothnagel, member of the executive board of the Central Association of Chambers of Commerce and Industry. The ability to identify and authenticate with a company account is not enough.

“The needs of companies in a wide variety of industries and sizes must also be able to be mapped.” In addition, such an account must be able to map different rights and roles of employees in the company and enable a return channel and machine-to-machine communication.

Sabine Herold also sees some catching up to do. “The best account is of no use if there is little you can do with it as a company. It is therefore important that the federal, state and local governments now quickly offer their services through this, ”says the Delo boss.

Entrepreneur colleague Korthäuer sees it similarly. “If we want to move Germany from the backward digitization positions in Europe to the front, we have to fully exhaust the potential of the company account. The first step is done. But a little digital is not enough. “

The background to the criticism is the still low scope of services. In fact, in North Rhine-Westphalia, for example, only 31 administrative services can be used digitally. State Minister for Economic Affairs Andreas Pinkwart announces that 41 more will soon follow.

A company portal is added to the company account

“We are driving the rollout of further digital services,” promises the FDP politician. But even then, there is still room for improvement: According to the plans published by the so-called IT planning council in 2019, a total of 575 company-oriented administrative services are to be digitized by 2022. In the future, the courts could also be involved.

But the effort is also criticized. Until now, companies have had to go to the respective authorities online in order to be able to use their services – if they are offered digitally. “A uniform and cross-departmental platform is desirable so that it is made as easy as possible for companies,” says association chief Korthäuer.

With Judith Gerlach, however, he runs into open doors. “There is currently still a gap here,” says the politician, who is the only one in Germany to head a full digital ministry. Because there are many good state, municipal and specialist portals, but no nationwide solution. At least still.

“We are already working on a company portal on which all administrative services from all over Germany will be bundled and available,” says Gerlach. The application for federal funds to set up such a portal has even already been submitted.

However, the development will take some time. “That’s another huge thing,” explains the 35-year-old. “Existing solutions in the federal, state and local governments, but also by chambers, should not be replaced, but rather intelligently connected. The company account and company portal are therefore two pillars of an integrated, future-proof platform solution for the German economy. “

When the digital contact between companies and authorities will really become everyday life and a matter of course now depends on the will of those responsible in the administrations. “The prerequisite for successful digitization is a cultural change to the digital way of thinking,” says a current study by the personnel and management consultancy Kienbaum.

Digitization of administration is a change across the board. “In addition to technology, above all attitude and culture have to be further developed.” For Marcus Korthäuer, this also means that politics take on the topic even more – also at the federal level.

“There never was a Federal Ministry for Digital,” criticized the head of the Rhein-Ruhr employers’ association. “That is a problem and cannot be understood with a topic of such a dimension.” In order to create more dynamism, the topic of digitization must be centrally controlled in the future – with a digital ministry in the next federal government.

“Alles auf Aktien – Academy” is the summer special of the daily stock market shot from the WELT business editorial team. From August 9th, every day, every morning from 5 a.m. For stock market experts and beginners. Subscribe to the podcast at Spotify, Apple Podcast, Amazon Music and Deezer. Or directly via RSS-Feed.