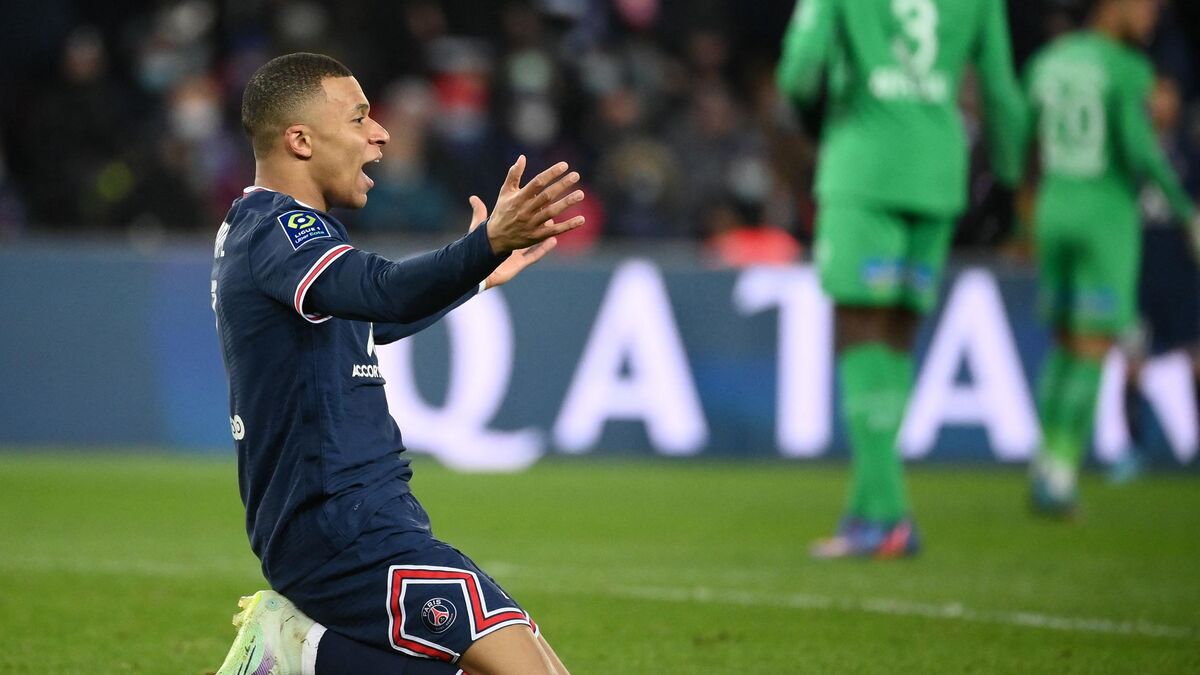 88′. On the other hand, the Greens throw their last forces into battle. Camara’s strike goes well over.

88′. Danilo is close to the double! On the corner, Danilo places a powerful header, repelled by a headline by Bernardoni. It was hot !

86′. Di Maria close to 4-1! Launched at the limit of offside, Di Maria presents himself alone against Bernardoni, whom he tries to lob. The Saint-Etienne goalkeeper has the right reflex and turns away with his hand.

84′. Two new changes on the Parisian side. Mbappé comes out to a standing ovation from the Parc des Princes, replaced by Icardi. Neymar, he gives way to Draxler.

79′. Neymar very close! Counterflash from PSG to recovery. Neymar finds Messi, who combines with Wijnaldum. The center of the midfield finds Neymar, whose right-footed recovery fails on the post. Bernardoni was beaten.

78′. In the fight with Mendes, Thioub obtains a corner, on the right.

76′. Very limited intervention by Kimpembe in his area. No penalty for the referee.

74′. Messi’s failure! Neymar accelerates on the left side and serves Messi behind. Without control, the Pulga tries its luck, but its shot goes to the right of the goal.

72′. Last change from Saint-Etienne: the striker Bouanga is replaced by Aouchiche.

70′. ASSE has only fired twice (one shot on target) since returning from the locker room.

68′. Bouanga’s strike! From the left, he tests a Donnarumma which folds well, on his right.

64′. Very good return from Mendes in front of Bouanga. The Portuguese is very solid on his left flank.

61′. On a corner hit on the right side, Gourna-Douat is guilty of a rather gross foul on Mbappé in the area. The referee does not flinch.

57′. Mbappé accelerates on the right side before centering back. Di Maria checks for Messi, who gives it back to him. The Argentinian finally misses his left-footed attempt.

55′. In a few minutes, Paris completely reversed the course of a meeting that had started badly. The Stéphanois took a big hit on the head.

53′. DANILO GOOOOO! On the right of the surface, Mbappé achieves a marvel of cross from the outside of the right foot. At the far post, Danilo flies very high and finishes with a header. 3-1!

51′. Neymar obtains and charges himself with a free kick, twenty meters. It’s in the wall.

48′. With 156 goals scored with Paris in all competitions, he joins Zlatan Ibrahimovic as the second top scorer in club history.

46′. Mbappé is looking for Messi in depth but the Argentinian is a bit short. Bernardoni clears away.

46′. Change for Paris: Kherer, in difficulty, gives way to Di Maria. PSG could play in a three-way defense with Danilo, Marquinhos and Kimpembe.

Half time. It’s the break at the Parc des Princes! Paris is suffering more than expected in its lair, against attractive and attacking Greens, who led to the score thanks to Bouanga. It took a sublime pass from Messi and a clinical achievement from Mbappé to equalize before the break.

44′. A final push from Neymar in the Saint-Etienne area sends a shiver through the stands. The Brazilian eliminates Nadé but Bernardoni comes out well on his feet.

43′. BUUUUT OF MBAPPE! The striker is reassuring from the start! On the right side, Messi finds a superb pass between the lines for the Frenchman who deceives Bernardoni with a shot from the right which passes between his legs.

41′. Concern on the Parisian side, while Mbappé held the back of a thigh…

40′. Nordin’s long shot is caught in two stages by Donnarumma.

39′. Mbappé tries to surprise Bernardoni with a lob, but the goalkeeper is on his guard and captures this ball.

38′. Since the start of the match, possession of the ball has been largely in favor of PSG (73%), yet unable to be dangerous.

36′. Mendes gets a corner from the left side. Hit by Neymar, he is repelled by Bouanga with a header.

34′. Mbappé is served in the back of the defense and comes up against Bernardoni before being signaled in an offside position.

32′. La Pulga arms a powerful shot with the left foot, which passes the Saint-Etienne wall. Bernardoni relaxes well on his right to ward off danger.

31′. In front of the area, Camara fouls Neymar. Dangerous free kick to follow.

30′. Mbappé stands out, on the verge of offside. In the area, he temporizes before serving Messi, quickly dispossessed of the ball.

30′. Served by Kherer, right side, Marquinhos crosses towards the penalty spot. Mbappé misses his recovery and Neymar also passes through.

27′. Neymar is a little too short to resume a one-two with Mbappé and Bernardoni dives into his feet to ward off danger. Mbappé manages to recover and get rid of his vis-à-vis, but no one is at the reception of his center back.

25′. Boudebouz launches Nordin on the right. The latter hits hard at the near post but Donnarumma watches.

23′. Neymar finds Gueye with a superb pass from the outside of his foot, but the solid Saint-Etienne defense intervenes.

22′. Paris tries to react. On the right side, about twenty meters away, Messi takes a free kick. Authoritarian, Bernardoni boxing in two fists. In the aftermath, Danilo’s shot is off target.

Free kick for PSG, very eccentric to the right on the twenty-meter line: Lionel Messi’s left foot center is boxed towards the axis by the fists of Paul Bernardoni, Danilo Pereira continues a shot off the surface but without framing.

19′. The Stéphanois do not release the pressure and recover again. It takes a good return from Gueye to stop the offensive led by Gourna-Douath and Bouanga.

18′. This is the fourth goal of the season in Ligue 1 for Bouanga. The Gabonese hadn’t scored since… the first leg against Paris on 28 November.

16′. SAINT-ETIENNE SHOP! A big mistake by Danilo, too slow in the recovery, benefits Bouanga. The attacker rushes to recover at the feet of the Portuguese and concludes with a cross shot with the left foot. 1-0!

13′. In the process, the Parisians revive and Mbappé goes against. Faced with two defenders, he finds the space to strike but Bernardoni captures without problem.

12′. Donnarumma’s double parry! The Italian goalkeeper badly repels a vicious cross from Bouanga, coming from the left, but is then imperial against Youssouf.

10′. On the center, Danilo rises higher than everyone but his head escapes the frame. Kherer seemed better positioned behind him.

9′. Yellow card for Mangala. Late, the French international mows down Wijnaldum on the left of the area. The free kick is released for a corner by Bouanga.

8′. Attentive, Kimpembe tackles perfectly in front of Bouanga, launched towards the cage.

7′. Neymar’s shot! The Brazilian looks for Mbappé then takes advantage of a favorable counter to find himself in a shooting position, in the area. His attempt flies over.

6′. On the Parisian recovery, ASSE defends high and seeks to block the opposing progress.

5′. Kherer’s mistake! The German misses his back pass, in front of the box, and Kimpembe has to concede a corner to avoid a dangerous situation.

3′. Paris regained possession and patiently built. Mbappé lands low enough to touch his first balls in the heart of the game.

1′. The first opportunity is not long! Saint-Étienne recovers the ball and, on the left side, Boudebouz heads towards Donnarumma’s cage. The excellent return of Marquinhos, in the area, allows the Parisians to get by.

21 hours. The kick off is given by Mbappé!

20h59. As the Russian offensive in Ukraine continues, both teams posed with a ‘peace for all’ banner before the start of the game.

20h57. The 22 actors make their appearance on the lawn of the Parc des Princes.

20h55. The meeting will be refereed by Pierre Gaillouste. He will have to manage a pressure perhaps a little stronger than usual, after the criticism of the Parisians towards the arbitration last week.

20h48. In the warm-up, Lionel Messi showed that he too had set the sights.

20h45. Once again, the main asset on the Parisian side should be Kylian Mbappé. The French striker “heir to Messi and Ronaldo” according to Michel Platini, who indulged in the Gazzetta dello Sport.

20h40. Both teams have completed their warm-up.

20h35. A figure is enough to give confidence to PSG: Paris is undefeated in its last 25 confrontations against Saint-Étienne, in all competitions (19 wins, 6 draws). The Ile-de-France residents can equal the longest series of invincibility in their history against the same opponent (26 against Angers, series in progress since December 1976).

20h30. For its part, Saint-Étienne will have to evolve without Wahbi Khazri, injured. Pascal Dupraz adopts a 3-4-1-2 with Bernardoni in goal, behind a defense formed by Sacko, Mangala and Nade. The middle will be composed of Gourna-Douath, Youssouf, Camara and Kolodziejczak. Boudebouz will have the mission of serving the scorers Bouanga and Nordin.

20h25. In the first leg, on November 28, Paris Saint-Germain won in pain (3-1) thanks to a double from Marquinhos and a goal from Angel Di Maria.

20h20. Mauricio Pochettino chose to start Donnarumma in goal. In front of him, a 4-3-3, with Kherer and Mendes on either side of the Marquinhos-Kimpembe hinge. In the middle, Danilo is surrounded by Wijnaldum and Gueye. Finally, unsurprisingly, the Mbappé-Neymar-Messi trio will be responsible for occupying the front of the attack.

8:15 p.m. The absentees are always numerous on the Parisian side. To the injuries of Leandro Paredes, Ander Herrera and Sergio Ramos were added those of Layvin Kurzawa and Achraf Hakimi. The Moroccan right side benefits from 48 to 72 hours of rest after a “muscular reassessment of the quadriceps”. As a reminder, Marco Verratti is suspended for an accumulation of boxes.

8:10 p.m. Paris must revive. The capital club remain on a 3-1 defeat at Nantes last week and will look to bounce back at home. At stake, a fifth success in a row at the Parc des Princes.

8:05 p.m. 37 points difference. It’s the abyssal gap that separates the two teams at kick-off. Leaders with 59 units, the Parisians will not have to take it easy against the Greens who have only 22 small points, one more than the red lantern, Bordeaux. The Stéphanois, who remain on three successes and a draw in the league, seem to have found a second wind in recent weeks.

20 hours. Hello everyone ! Welcome to this live to follow the meeting between PSG and Saint-Étienne, on behalf of the 26th day of Ligue 1. Kick-off at 9 p.m.

War in Ukraine: the conflict will drive up the prices of agricultural raw materials