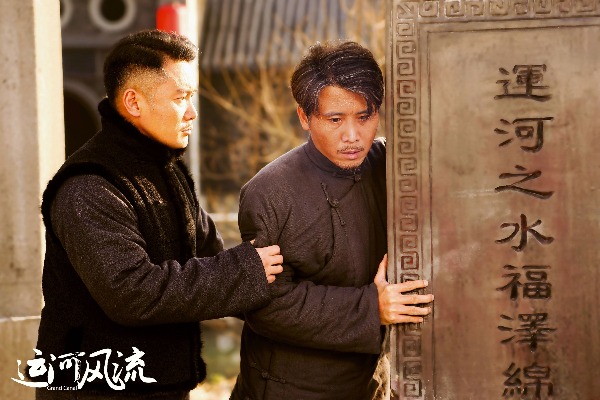 Zhang Xinjian, the director who once filmed “Crossing the Guandong”, his latest work “The Merry Canal” is being broadcast on Beijing Satellite TV. This drama, which took nearly four years to complete, has continued to rank among the top ratings in the same period after it was broadcast, and the audience responded well. For Zhang Xinjian, no matter how the market environment changes, his creative principle of “culture as the soul and art as the foundation” has never changed.

“The Merry Canal” is another collaboration between screenwriter Gao Mantang and Zhang Xinjian. Since the “Crossing Guandong” that year, the two have cooperated several times, and they have a tacit understanding and similar interests. Zhang Xinjian recalled that when he first approached the project in 2015, the show had only a rough outline. After discussion, the two agreed that this topic is promising. Gao Mantang continued to refine the script work and revised it repeatedly for several months.

“When the outline of the episode comes out, we have finalized the main characters, the outline of the story and the composition of the plot, and the prototype of the drama “The Merry Canal” will be there.” Zhang Xinjian recalled that while the script continued to be refined, the director team began to do their own “” Homework”, “We contacted the written materials of the relevant historical period according to the existing time, place and characters of the script, conducted on-site interviews, and the art and modeling departments worked first.” Relying on the canal, the canal ruins in reality can hardly be used for shooting. In order to meet the needs of setting the scene in the play, the crew started filming in Linyi, Shandong, and successively moved to Changshu, Jiangsu, Hengdian, Jiaxing, Shanghai, and finally to Wuxi.

The boats needed for the panoramic view of the canal also followed the scene. The large boats more than ten meters long were pulled by trailers where they could pass by land. When they arrived in Hengdian, there was no corresponding scene, so they found a river scene near Hengdian to shoot. The canal shipping landscape in the period of the Republic of China presented in the play needs to re-build the wharf, and returned to Taihu Lake, the former shooting location of “Crossing the Guandong”. Zhang Xinjian revealed that the story of the canal has not been reflected much in film and television dramas before, and the difficulties of shooting and setting scenes have never been encountered before. In line with history, it is the homework of the props and stage art department.”

For Zhang Xinjian, completing these tasks is only one of the tasks of the director team. In the face of a 26-year-long and historically rich work like “The Canal”, the more important thing besides the desk work is to grasp the “soul” of the play. where. “As the creation progresses, the director must have a deep and accurate understanding of the script, and he must have his own thinking. I want to make the words of the literary script become vivid and vivid, so as to grasp the initiative of creation and bring the literature to life. Only when the script is sublimated and points are added instead of subtracted, it is possible to extract the connotation and ideological nature of the play, and to give a delicate display in terms of artistry.”

In his opinion, “The Canal Merry” is a historical drama that depicts that from the early years of the Republic of China to the early days of the Anti-Japanese War, many people in Jining obeyed the rules, broke the rules, and established the rules. , is a period drama with a little tragicomedy, which is the basic genre of this drama. The family customs and folk customs carried by the “Jining Three Heroes” in the play have not only the traces of the local era, but also the essence of traditional Chinese culture. As the representative of the official family, Huang Zirong adheres to the family motto of “heirloom of righteousness”, which is upright, upright and honest; the representative of the businessman, Song Lusheng, adheres to the principle of “faithfulness-based”, abides by honesty and authenticity; the representative of the literati, Yang Chunzao, abides by the ancestral motto of “cleanness” “Bone straight” is upright and arrogant. They are the inheritors, practitioners and masters of family traditions and canal culture. “Setting the rules” reflects the wisdom and mind of the ancestors, “abiding by the rules” reflects the morality and sentiment of the later generations, and “breaking the rules” is a kind of courage and courage.

Zhang Xinjian bluntly said that the themes of the Republic of China have been photographed repeatedly over the years, but there are fewer and fewer masterpieces. “We also had doubts when we started filming five years ago. Can such a relatively heavy theme still be acceptable to today’s audience?” The feedback after the broadcast made him gratified, “It turns out that we must trust the audience’s aesthetics. The truth of the art and the truth of art are combined as perfectly as possible, and the shaping of the characters is adjusted according to the aesthetic needs of the contemporary audience, so that the audience can get a real and credible feeling, and truly respect the aesthetic and emotional needs of the audience. , taking history as a mirror and drama as a mirror, I believe that our audience will not miss works with connotation, and creators should continue to adhere to the principles of artistic creation.” Reporter Li Xiazhi

News 24 | Officially.. Sports decides to deprive the agreement of support for the mass attendance initiative