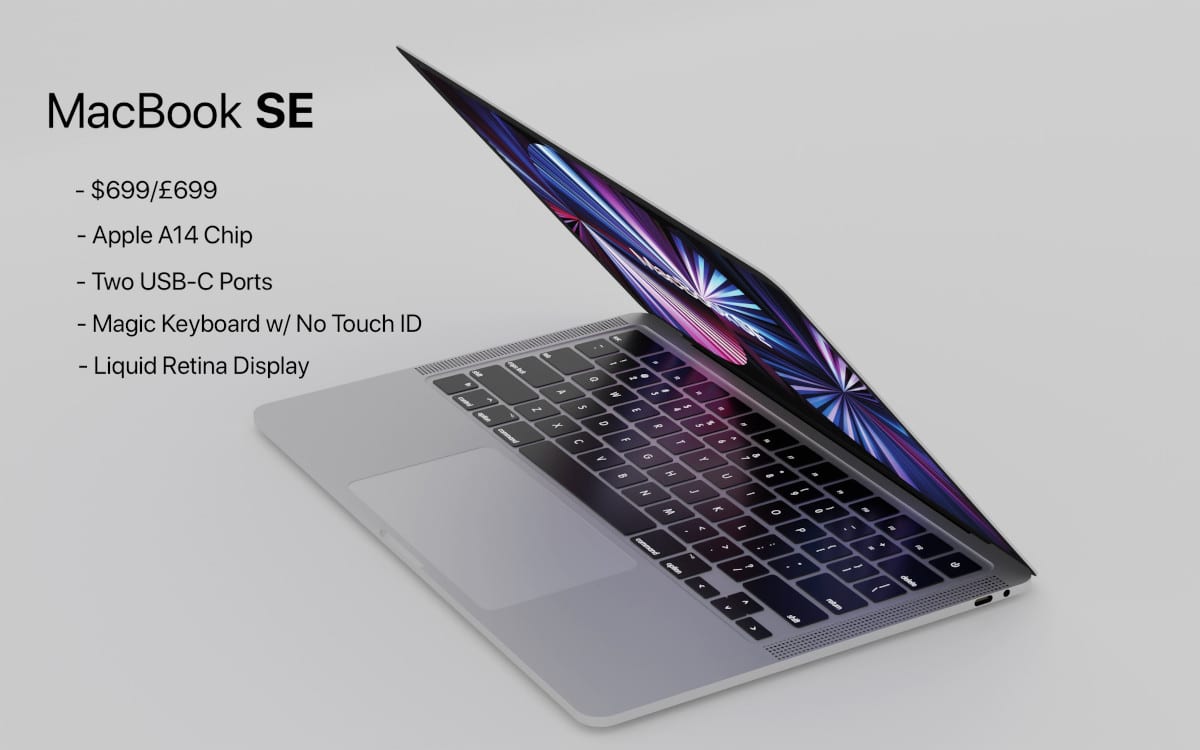 A designer came up with a concept of a MacBook with a 12-inch screen. He called it MacBook SE, declining Apple’s nomenclature on iPhones and Watches. Taking the design of the MacBook Air M1 of 2020, it is distinguished above all by an extremely aggressive price. Presentations.

A designer answering the soft pseudonym of Appley posted on his Twitter account the image that accompanies this article. This is not a new product. It is a concept. The illustrator imagined what a lightweight, small and affordable laptop from the Cupertino company could be. And he called it MacBook SE, in homage to theiPhone SE and theApple Watch SE (SE being the English acronym for “Special Edition”).

The MacBook SE is an ultraportable and very affordable Macbook concept

Let’s take a closer look at this concept. The MacBook SE Appley is based on the design of the MacBook Air M1, released last fall and you can find the full test in our columns. You will find there the two side speakers which flank a full keyboard also very close to that of the MacBook Air (you find in particular the direction keys in inverted T). On the other hand, the designer removed Touch ID of its MacBook SE, sacrificed on the altar of savings.

As on the MacBook Air M1, the designer imagines his MacBook SE with two ports only, USB type-C compatible (the author does not specify whether it is a Thunderbolt port). Unlike the MacBook Air M1, they are not gathered on the left edge, but are evenly distributed on each side of the computer. You will also find a 3.5 mm mini jack port.

On the other hand, no savings on the screen. It is a slab Liquid Retina Display, as on the latest MacBooks. Here, the slab measures 12 inch, a size that is obviously reminiscent of the 2015 MacBook Retina, as well as the first rumors about le « MacBook ARM ». We now know that Apple preferred to rely on 13 and 15 inch panels for its MacBook (Air or Pro). The return of a 12-inch model is hoped for by all ultra-portability fans. But the new iPad Pro M1, released at the beginning of the year, has largely sounded the death knell for this hypothetical project.

Inside the computer, you would find an ARM SoC. No Intel, of course. The designer imagines that it could be theA14 Bionic, which you find in iPhone 12 and its variations. The author of the concept therefore rejects M1 which, however, would prove more logical. Finally, he puts forward a price: 699 dollars, well below the $ 999 mentioned in the MacBook ARM leaks. And also below the Mac Mini M1 (sold 799 euros), the cheapest of Apple computers currently. What do you think of this concept? Go to the comments to continue the debate.